Animation not rendering through to the last frame using Eevee

I am working on version 2.82a. I created an animation with 4 objects (3 are parented to 1 and that one has a rotation action. There is an "Image as Plane" object as a background that is a motion clip of some clouds that is well over 380 frames long. I completed the shot at 280 frames and rendered that out to PNG frames. Worked great and the AVI video file that I made from it look really good. But here is the problem. The shot was too short so I upped the end frame to 380 frames on both the timeline and the properties panel and then rendered out the PNGs to another folder. When the render got to the 282 it would only render black frames. The shot plays perfect in the Layout window and makes it al the way to the 380th frame. I though that maybe the background video was too short , but that proved to be wrong, I turned Blender off and rebooted but still no frame will render past 281 ? I have 4 lights in the scene, 2 point lights and 2 spot lights. the camera has a move which is basically a zoom out. All action and movement comes to a stop at frame 200 except the two point lights which move to create a sheen effect till the end of the scene. Oh and the background continues to play till the end. Again all of this looks great playing in the Layout Playback. Oh one other thing I have used Eevee only during this process. Hope that someone has had this issue and found a solution thanks for you help in advance.

Sounds to me like you are still rendering the image strip in the sequencer. you can disable the sequence in the output options under post processing, then it should render the missing frames. 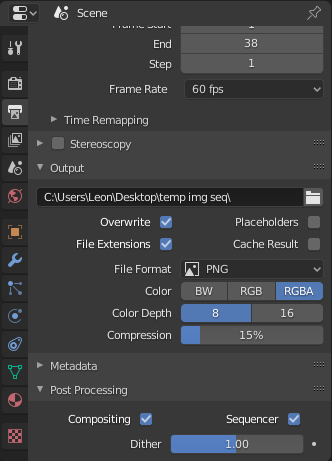 2
Particle emission begins from the frame I start rendering from, not the frame it should begin from?
1
Rendering an animation, all works except frame 2?
1
Does blender recognize the same background if present in multiple frames of an animation?
1
Eevee: First animation frame renders black & white until something in the scene updates
3
Why doesn't my Eevee rendered image match my view through the camera?