Following the Blender Guru Wrecking Ball tutorial and ran into a hitch at 4:47 with Cursor Pivoting.

When I select all objects, then rotate with hotkey R, the objects rotate around the cursor - but they keep their initial orientation. The links in the chain stay upright until they are no longer linked: 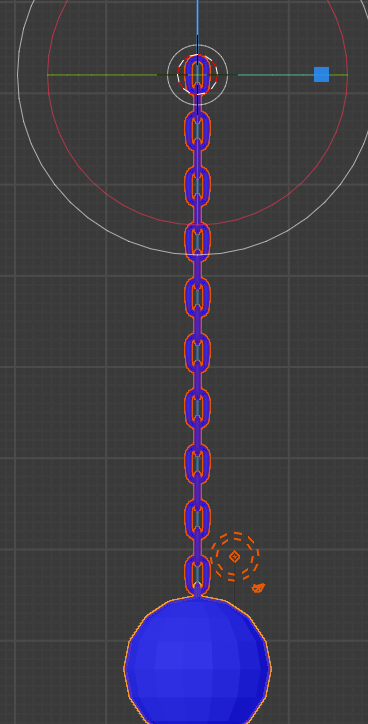 This happens when the Transformation Orientation is set to Global as well.

From the tutorial, my expectations were that rotating the chain would preserve the orientation of the links in relation to each other, without grouping or making a parent object.

The tutorial had me reset the origin of each link to its center of mass (which worked as expected), did not have me group or parent the objects, and while I've goofed around with the Active Tool's Transform: setting (I've tried checking origins, locations, and both, and nothing worked) I'm sure this is a result of an incorrect setting somewhere. Adding a parent:child object relation between the bottom of the chain (children) and the top link (parent) entirely prevented movement, so that wasn't it.

How do I rotate the chain of objects around the cursor as pivot point, in a way that rotates the individual objects at the same time?

Please share the link if this is a duplicate question - I saw this post and it covers how to pivot objects around the cursor, but doesn't address what could go wrong when the object's orientation doesn't rotate along with its location.

Browse other questions tagged objects groups object-mode or ask your own question.

1
How To Rotate some Vertices around a changed Pivot Point?

6
What setting locks local rotation and scaling of an object?
1
How to add linked groups symmetrically around an object
1
Set Rotation of Multiple Objects to 0 Degrees
1
Mirroring in Object Mode, taking rotation into account
4
Why doesn't Blender have groups that allow you to transform grouped objects all at once?
1
How to rotate many objects around their individual origins?