(To preface, I know I made a similar question in the past, though this one is much different in required execution.)

Hey all, I found myself in quite a bind this time as I'm attempting to have a seamless gradient between two separate objects.

The main idea is to get the fur pictured here to have a consistent gradient effect with the torso: 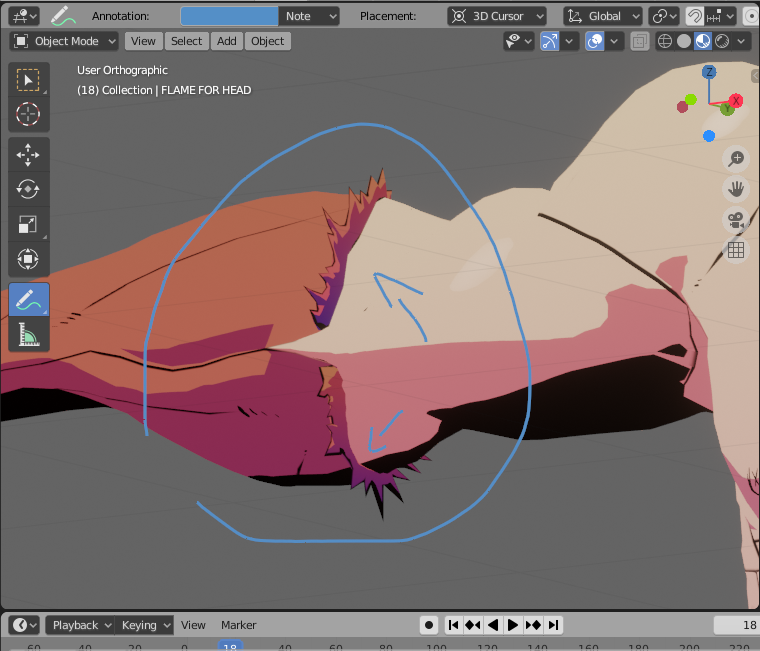 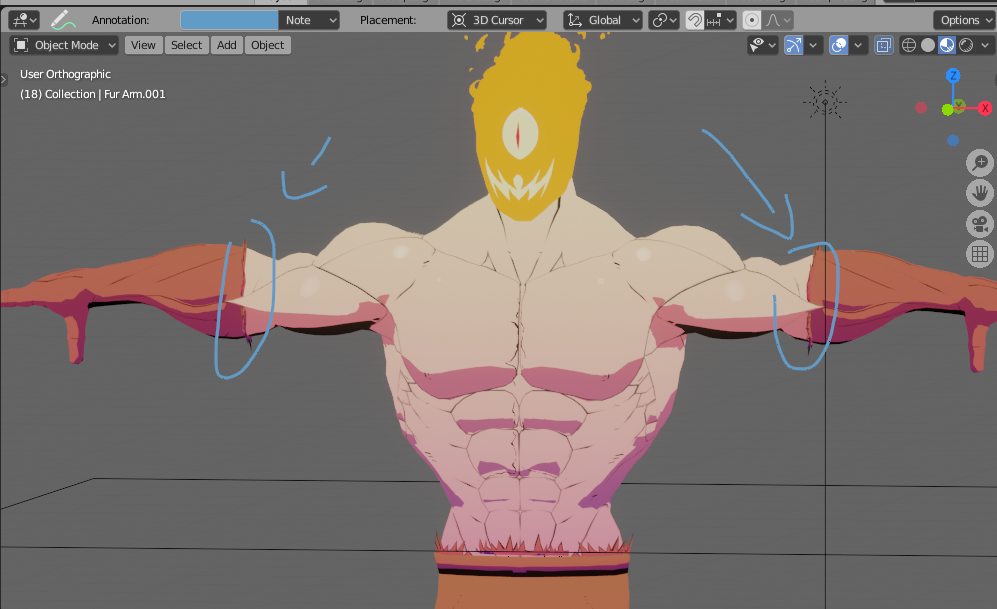 Though either I can't achieve the effect I want through a single material or end up with manifold problems when merging the objects in an attempt to unionize the gradient effect. 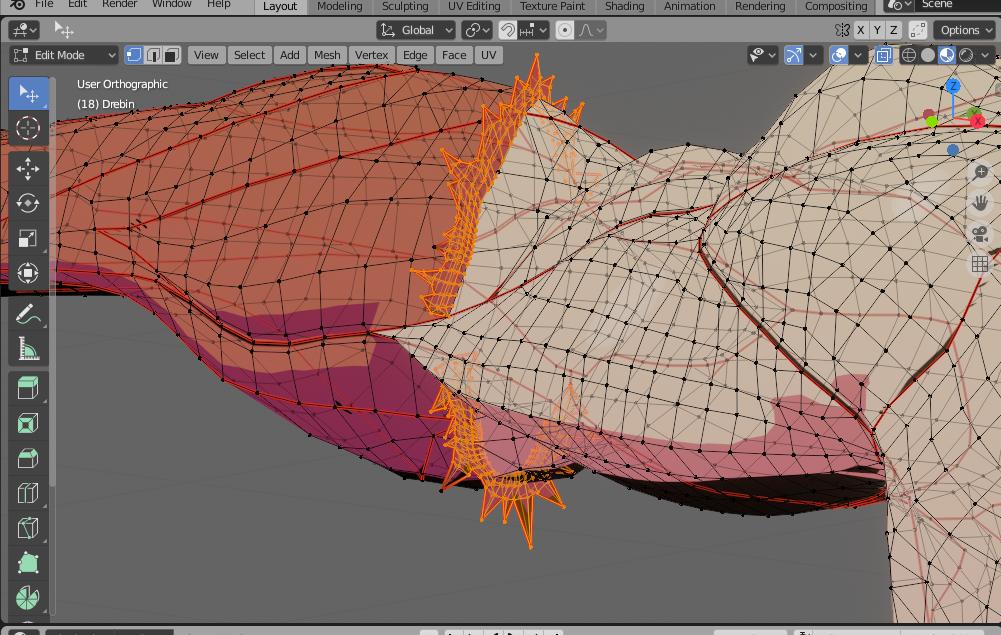 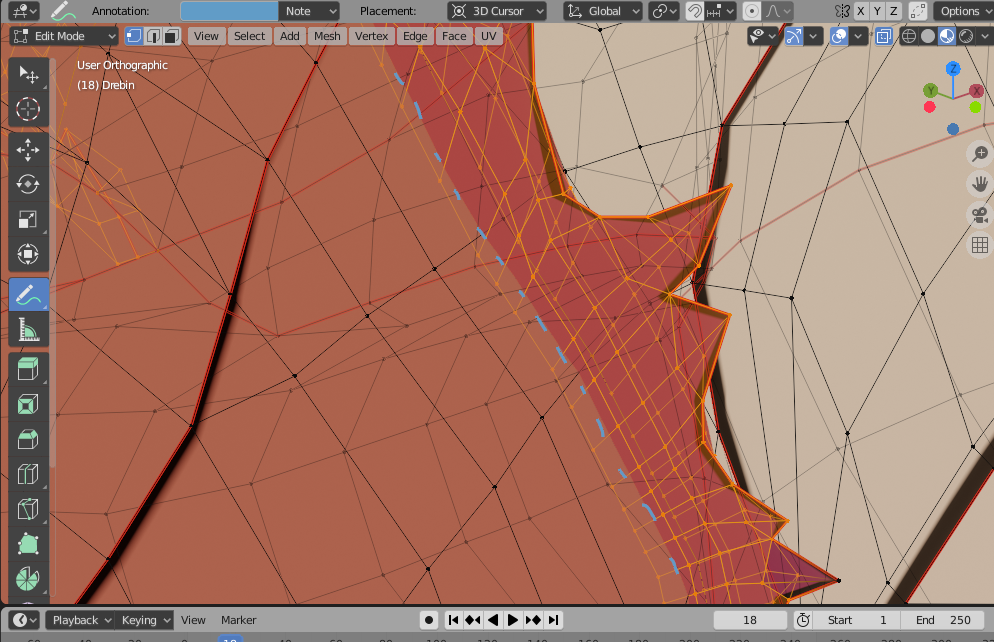 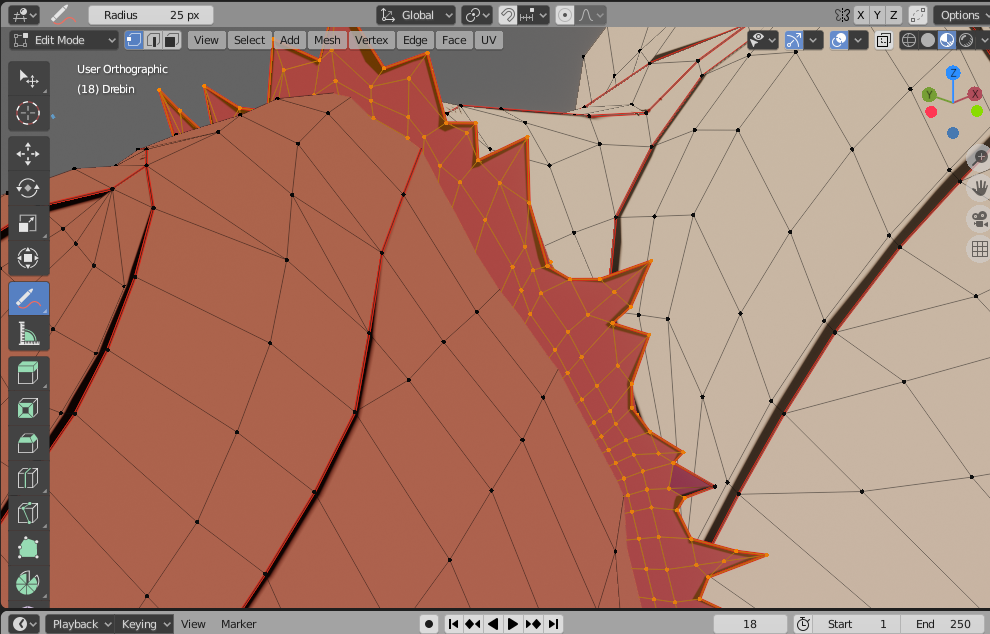 It seems that trying to merge at all is not going to work since recalculating normals of any manner yields no results, and there is no chance at all I'm deleting any part of my meshes, which also eliminates the need for trying to boolean. (I tried too)

That leaves a gradient that I can't seem to use as seamlessly as I thought.

The goal is to have a non-disjointed gradient along the entire torso. Below is an example of how the gradient begins darker in two different areas on the Torso. 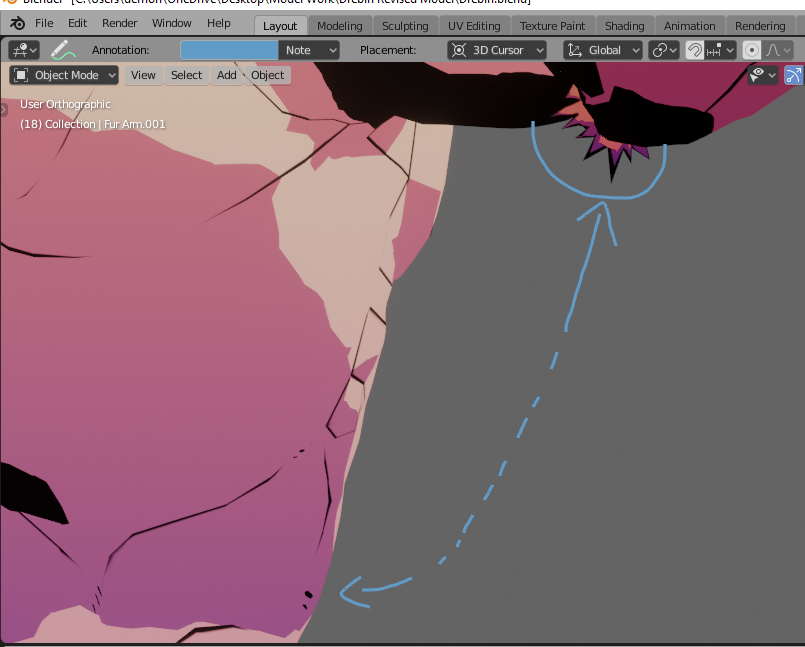 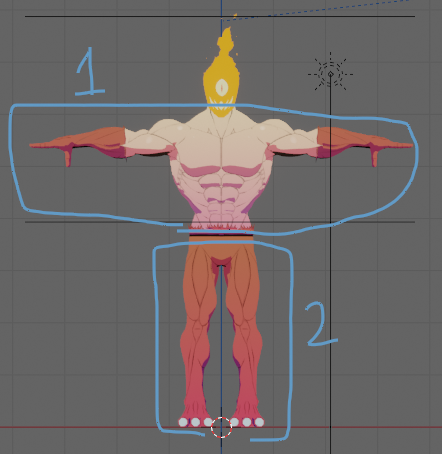 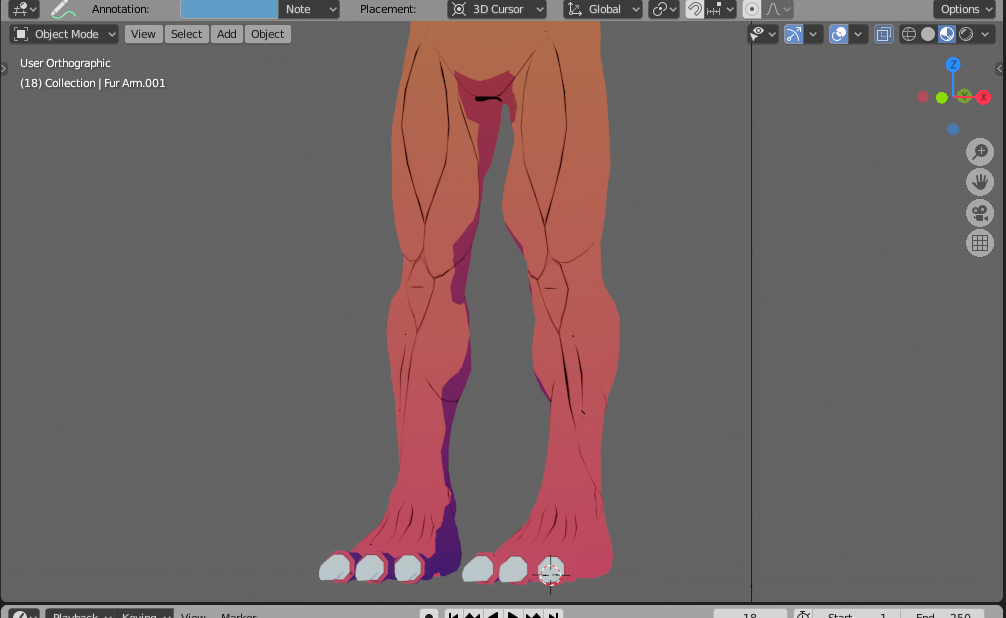 My current node setup would be fine if it weren't for the fur being disjointed of course, so I hope at this point to use the object node in some fashion to refer to origin points as where 'new' gradient stretches begin.

I saw this video -> https://www.youtube.com/watch?v=rmUfNw6luWI which I thought instantly solved my issue though the gradient effect demonstrated is applied overall to an object, not 'linearly' or how one expects a gradient to work.

*I left my gradient setup at the bottom.

***So after ALL that context, I ask now if I can use the Object Info node or another setup to achieve shared gradients and separate gradients based on object's origins? ***

TL;DR: 1. Need a seamless gradient between a torso and "arm-piece". 2. Legs must have separate gradient at the same time. 3. Must all be in one material. Object Node might lead to what I need after watching -> https://www.youtube.com/watch?v=rmUfNw6luWI 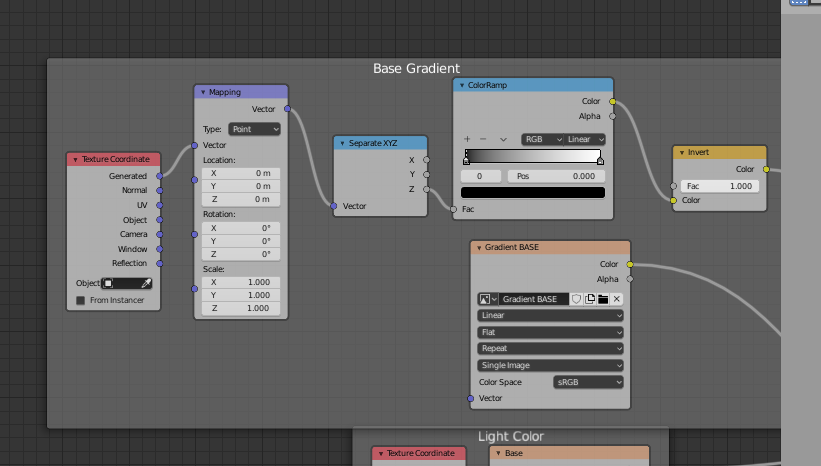 I found out what I needed not even ten minutes later lol.

What I did was set the origin points in the same places of objects I wanted to have a shared gradient, and where exactly it was set would be the start of a gradient.

Then I used the "Object" output from the Texture Coordinate node instead of "generated" in my setup to actually refer to the aforementioned origin points.

You can't even tell the fur is a different object! 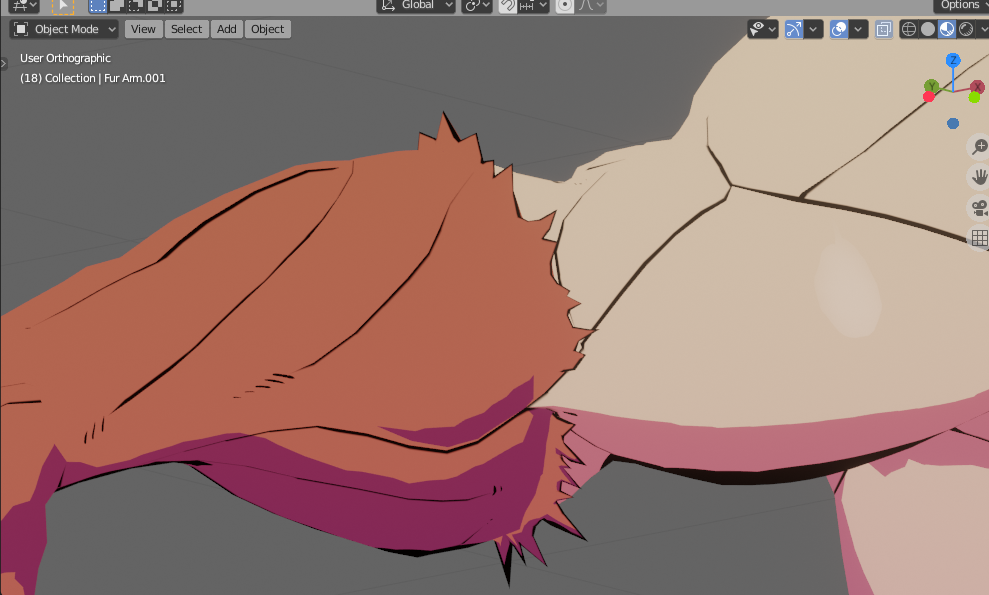 If, for rigging or some other reason, it's inconvenient to place the origins of the parts in the same place, you can put the fur's gradient in the Object Space of the arm . Select Object texture coordinates, as you have done, but select the arm in the 'Object' dropdown at the bottom of the node, to tell it which object (as opposed to the default 'this object').

Alternatively you could put both gradients into the space of a helper, say, an Empty, which opens possibilities like conveniently tweaking shadows independently of light/apparent light direction.

Not the answer you're looking for? Browse other questions tagged node-editor objects origin or ask your own question.

0
Cycles: Apply gradient to light cone setup with spotlight lamp
3
How to copy nodes and their links from one node tree/material to another - in python?
2
Is it possible to have seamless material blending on two separate objects?
4
How can I choose randomly from five Mix RGB nodes?
3
How to keep two separate UV maps when merging two objects into one?
5
Bump node seems inverted on one side of the object
7
Make Gradient between two gradient spheres