Primitive shapes whose parameters are dependent on their relative postiton

Fist time posting. I love Blender (a hobbyist new user making stills and stuff) but if it is not the right software, feel free to send me off.

I'd like to have a sphere and a cone whose base is formed of the tangent points of the rays cast from the cone's tip to the sphere, depending on how far the cone's tip is from the surface of the sphere. In other words, the cone would always depict a visual horizon of the sphere: approaching it's half and an infinitesimal angle as the distance goes to infinity, and an infinitesimal radius and a 180 degree angle as the distance approaches zero. I would then be able to keyframe the distance to create an animation of how the shape of the cone changes depending on it.

Here is one workflow that might get you where you want to go:

Create a "unit cone" with radius 1 and depth 1: 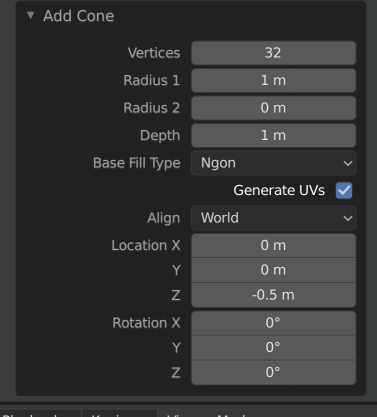 Notice Location Z is set to -0.5. This places the vertex of the cone on the origin.

Use the object menu to set the object origin to 3D cursor. Now the cone's origin is at the vertex. All scaling and rotating we will do is reference to the vertex.

Add in a UV Sphere, leave the radius at 1 for simplicity, then move it away from the cone. While you've still got the Sphere selected, add a "Limit Distance" object constraint, set the Target to the Cone, Distance to 1.1 (a little more than the Sphere radius) and "Clamp Region" to outside. This prevents the Sphere from moving too close to the Cone's Vertex. Its hard to calculate the tangent of a point inside the Sphere! 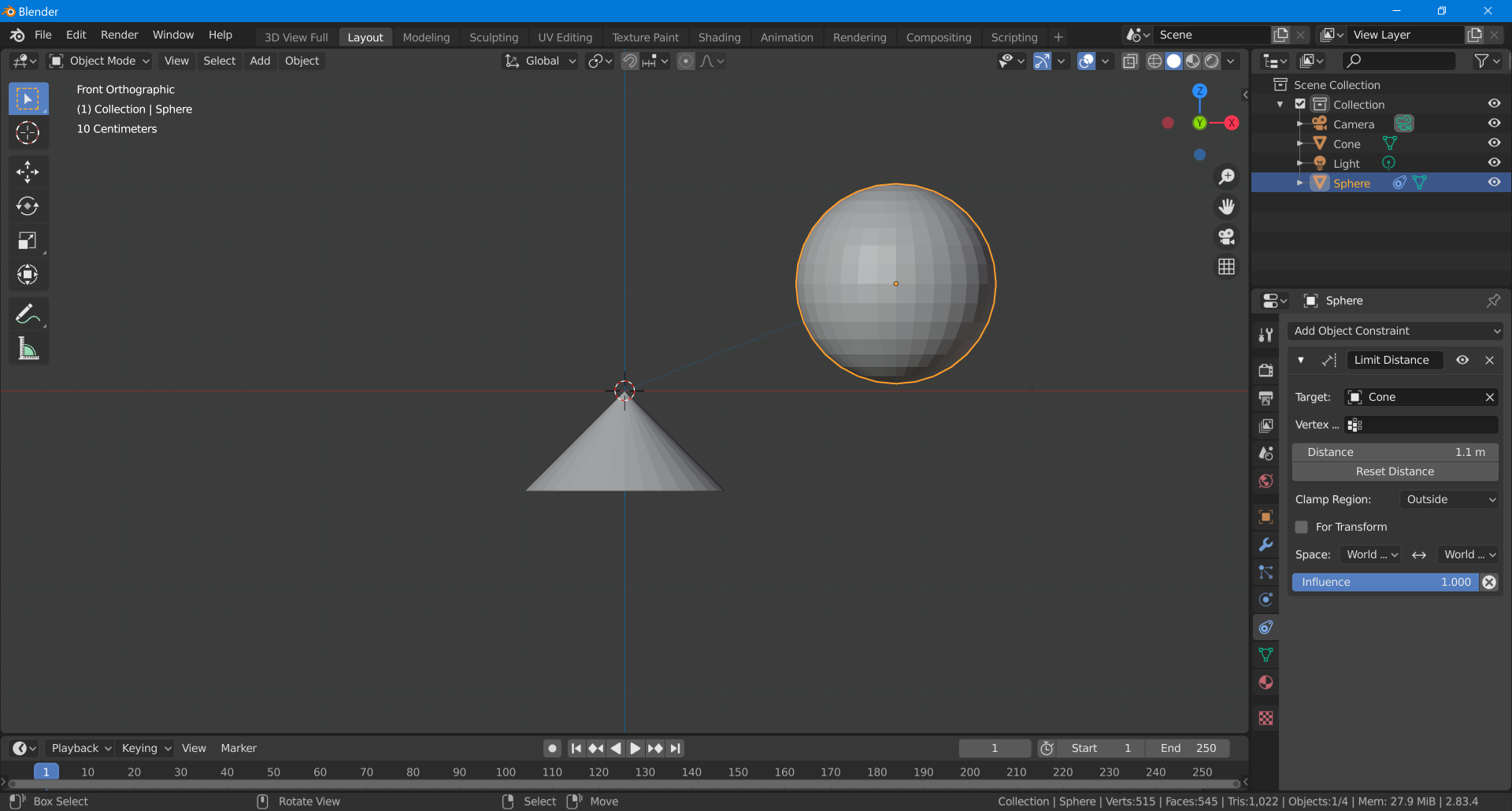 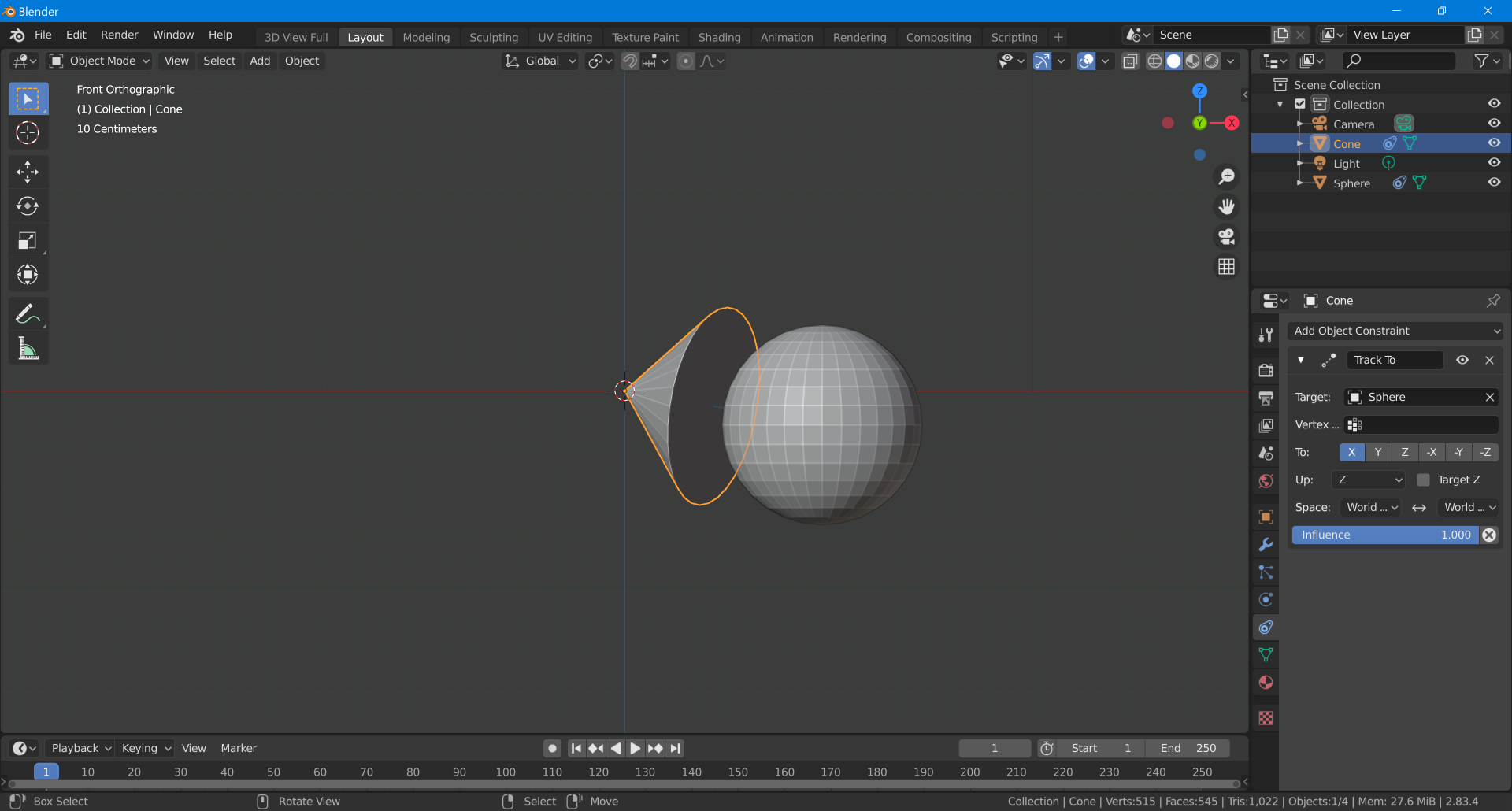 Now we need to add some Drivers to the Cone: Open the Cone's Transform panel, right click on Scale X and choose "Add Driver", on the Driven Property panel, set the "Expression" to var, and under Input Variable set the type to "Distance" and the Targets to Sphere and Cone. This should make the Cone stretch to always intersect the origin of the Sphere. You can experiment with the expression to get the effect you want.

Finally, add drivers to the Cone's Scale:Y and Scale:Z properties.

Where dist is a distance variable as setup previously, and var is height of the cone, taken from "Scale:X"

Not the answer you're looking for? Browse other questions tagged scripting constraints mathematics or ask your own question.

7
What are the parameters event and full_event of UILayout are for?