How to discover the users of an action?

This blend file contains a Sphere, a Cube and a Cone.

The action CubeAction acts on the cube. In the Action Editor, it can be seen to have 2 users. So it must also act on another object, but which one, the sphere or the cone?

In this case I can just just select the sphere & cone in turn to see which one causes the Action Editor to focus on CubeAction. But what if there were many objects?

Actions don't seem to appear as a node in the outliner that I could expand to somehow see what objects they are getting applied to.

You can type the name of the Action in the Outliner "Live Search" field : 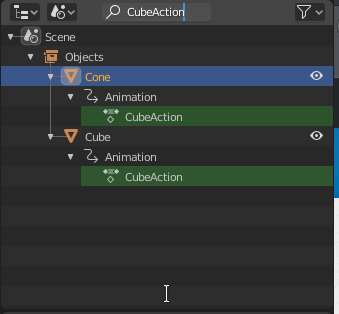 In this example, "CubeAction" is attached to both Cube and Cone objects.

Not the answer you're looking for? Browse other questions tagged animation actions data-blocks or ask your own question.

2
Can not delete an animation action
0
Make multiple smaller weapon animation clips out of big default action for use in Unity game engine
0
Rename action in blender 2.8
1
Does gltf only support the export of one strip per NLA track?
0
Animating separate objects / items independently in the same action