How to achieve a stylized burning (Wireframe) effect?

I tried many fire simulations, I googled hours of hours about all imaginable keywords* in all sorts of combinations and I followed many many tutorials about smoke simulations. But I don't actually quite get an effect like in this 3d projection mapping video, starting at around 1:35 until 1:50 min which is exactly what I try to achieve.

Does anybody know, how to do this? I want to use Cycles for rendering, but my question is more about the particle systems settings. 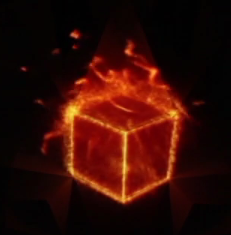 Sebastian Łukaszuk, who created this effect originally, gave me this hint via mail: "Everything needed for the burning cube effect is some particle systems with small particles and force fields (turbulance and wind)."
He created it in the good old Blender Internal in September 2012. But since the new Point Density Texture feature it should be able to be done in Cycles as well.

Gottfried Hoffmann already brought out a video training about this "more sylized fire effect". And he already told me, that the "Basic Effect" is heading into this direction, so with it it should be possible to inflame a cube like this. He's now up to bringing an update to his course that shows how to produce such a stylized fire with this Basic Effect.

I would like to know specific fire simulation/particle system settings for Cycles and needed Effect Fields to achieve this stylized fire effect. I don't need a general "How To" of setting up a Smoke Simulation - there are already enough tutorials out there for this topic and I know how to render fire with Cycles in general. The result should look pretty much like shown in the mentioned video including the beginning "ignition" effect... The wireframe cube is just a good example Object (you can use Suzanne as well) - my question is not about the cube itself, but about the fire effect and how to set it up as in the end I want to transfer this burning style to different models.

The color effect I try to achieve is exactly what was done for the great old 2.62 splash screen:

Create a Cube or use default object and apply a Wireframe modifier. 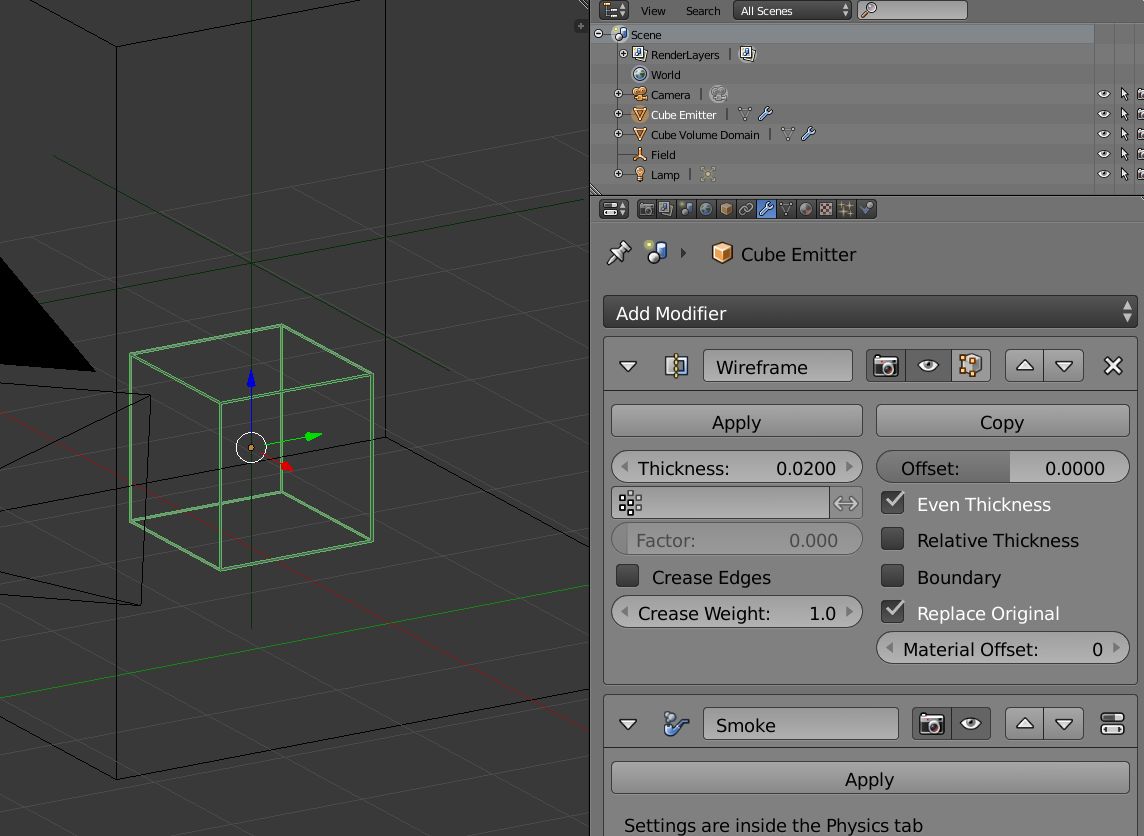 with the cube selected go to the Physics properties panel and turn on Smoke. Set the flow type to Flame and Flow Source to Mesh (not particles). 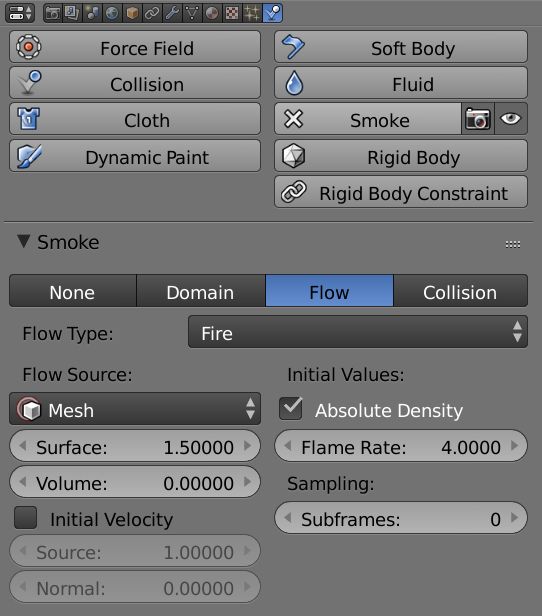 Add another cube around the first one, this will act as the rendered domain object. 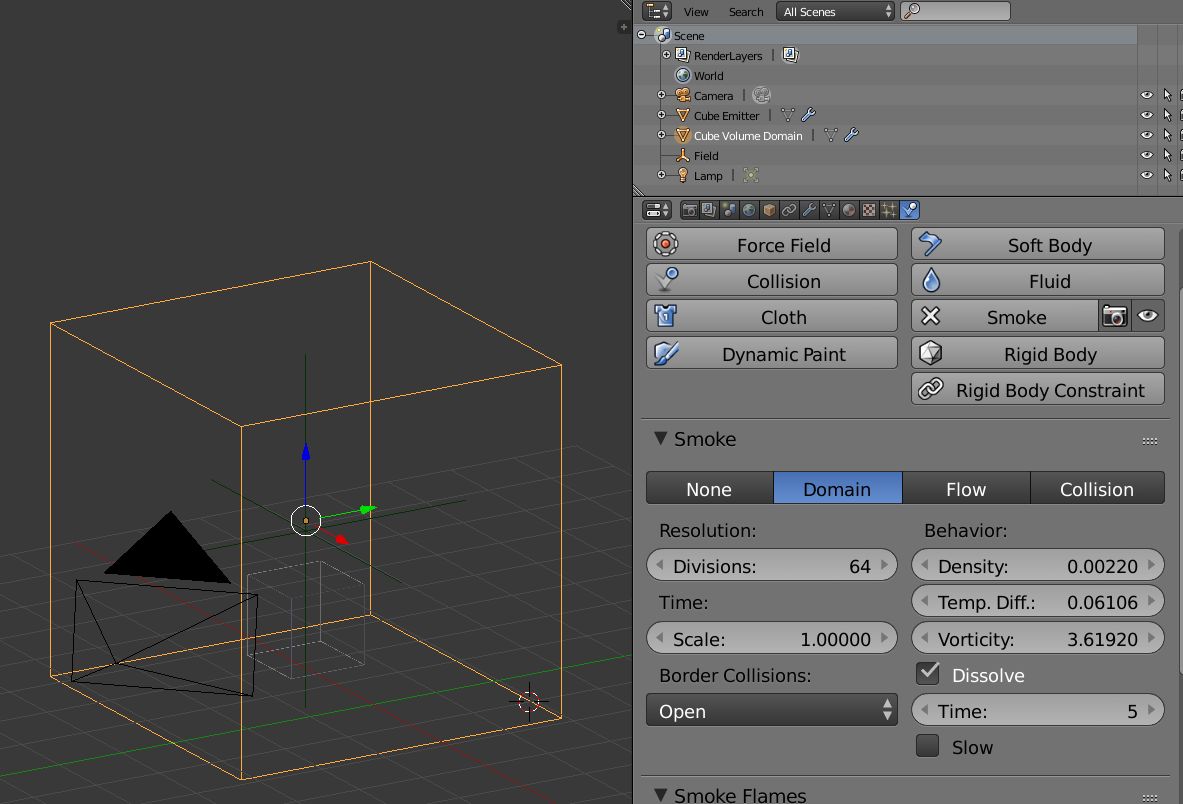 Set the volumetrics as follows, be sure to turn on Adaptive Domain to reduce processor load. 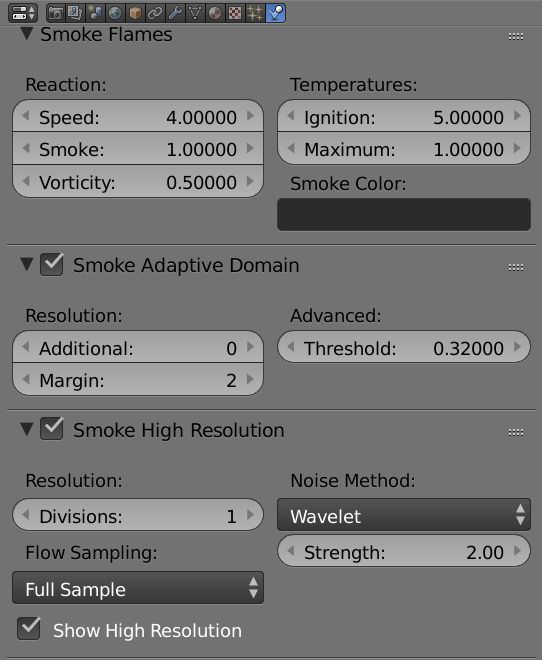 Go to the Domain object's material settings and set up the Blender Internal values as follows or look for Cycles nodes instead. If in doubt create another cube then select it and perform a Quick Smoke effect. Then you can use and modify the automatically generated material on your object. 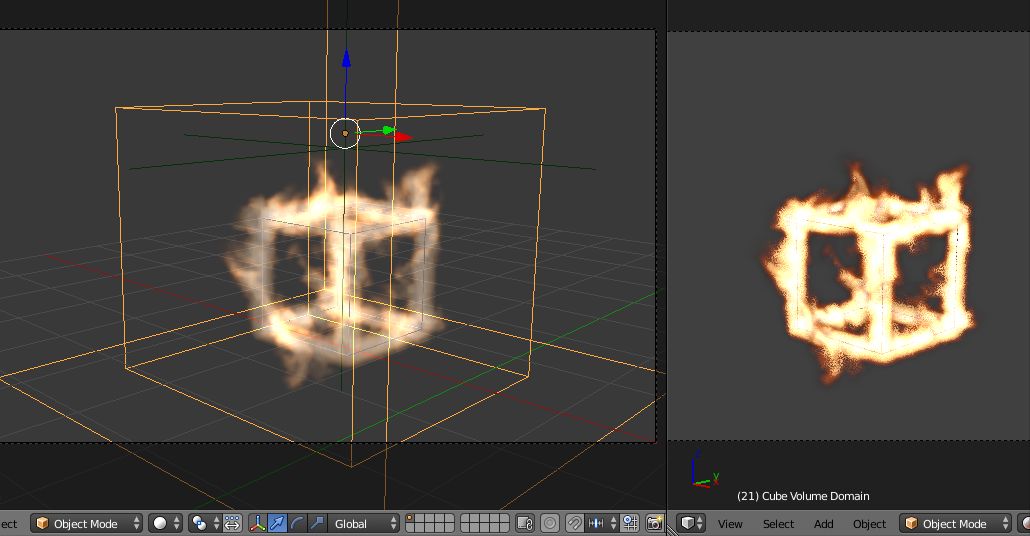 To change the nature of the flame (but not it's shape), you can change the density of the Domain Object's volume material and the texture blend in the texture properties

Here's what I have so far as far as the particle system goes. I think it looks pretty close to the stylistic-flamey look you want.

I haven't really gotten any satisfactory shaders for the flames yet, so I may (hopefully) update this if I can get a better render.

The Particle System and Force Fields

I am using a standard cube with a wireframe modifier for the emitter. It emits 100,000 particles over 100 frames. The main changes to the default settings are I added very small amount of normal velocity and gave a 0.900 random variation to the particle life, as well as turning off gravity.

The flame-like animation comes from a rather elaborate mixture of force fields.

There are two Wind force fields. One aiming sideways at an angle to get the slanted look of the flames, one is aimed straight up to push the flames upwards. I also have a Magnet force field above the cube to pull the particles vertically as well.

The brunt of the flame behavior comes from the Turbulance force fields, of which there are two. One stronger one with a larger Size, and one weaker one with a smaller Size. Both are animated moving upwards, the smaller weaker one moving faster.

Here's the .blend file to play around with:

I did this in blender internal, but it works with the particle system. If it's close to what you are looking for then included is everything you need for the workflow. (I know it's closer to dust instead of flame, but that seemingly is a material thing).

The 1st trick is to first go into edit mode on the cube and select two verts on one edge. then sub divide that like 5 times (repeat for all edges).

The next step is to add the emission source to the verts.

Inside the file you will notice that I animated some of the particle sliders to pulse, including turbulence, children, and even animated a slider or two on the material. This was my first impression of the combo that would produce this effect... so:

I believe the effect comes from both turbulence and particle speed/normal direction and a pulsating amount of children particles(for density changes).

As for the other foreground stuff, that could be made to pulse from a bigger plane with the same effect.

NEXT... check the blend file for all of the particle settings: Link to blend file

-->Is this more what you are shooting for?

If so, let me know, and I'll post the blend.

Not the answer you're looking for? Browse other questions tagged cycles-render-engine rendering animation particles smoke-simulation or ask your own question.

0
How do I make particles like the "flashing" ones in this YouTube video?
0
Why wont smoke appear?

1
Particle System does not stick to the mesh if the mesh is moving (global,local coordinate-system?)
0
Fireflies for my burning earth
1
Baking of several particle systems
0
Blender Fluid Simulation Inflow From Particle System With Liquid Simulation
2
what are the pros and cons of using particle systems when simulating smoke/fire?
2
How to make effect of burning objects from Particles?