I'm building a model completely in python. This means that I start with an empty scene, and all I want to do is run a python command that creates all meshes and objects. I'm building this python script in vi, just because blender is amazing 3D software, but lousy at making a decent text editor.

Off topic: The main reason for building my model this way, is that I want to have complete control over what I build, complete reproducibility, and I get to store my model in github, having proper version control and clear change sets. I would certainly be interested in hearing some off-topic reactions on how I could do this better/differently.

While developing this script, I constantly want to reload, from scratch, change a line in my script, reload, etc. I was wondering what the best way to achieve this is. My requirements:

Loop over all objects and delete them

I can manually try to delete all objects (using the method described here): http://blenderscripting.blogspot.nl/2012/03/deleting-objects-from-scene.html This doesn't quite work (it crashes if there are hidden objects), but this is probably solvable. However it doesn't satisfy my 3rd requirement. It does allow my to make 1 oneliner that loops over all objects, delete them, and then runs my script again.

Using bpy.ops.wm.read_homefile() to get to the new state

Using this command I can get to the new state, however this also resets the python console, meaning that any subsequent command gets ignored and I can't up-arrow anymore to get it back.

Use bpy.ops.wm.open_mainfile() to get to a known saved state

This suffers from the same problem as the previous bpy.ops.wm.read_homefile, however it allows me to save some history in the python console, so I can up-arrow to it. It works, sort of, but not ideal.

In all of the above settings, I used

to execute the script.

My latest plan is to use modules (however I think it would work just as well with the above exec command), and the undo history. Calling operators from a script doesn't add them to the undo history, so if after the running of the script I push onto the undo stack, I can then cmd-Z my way to the previous state. I could probably. When I start, I run once (single is my module name):

Now I use the oneliner

whenever I want to see how my program runs. When I'm ready to do a new run, I cmd-Z until I'm back at the beginning (most of the time once, sometimes I did some manual operations and need to press it more often).

Somehow I feel however that there must be a better way to do this, to reset the scene to some saved or new state, while the python script keeps running....

I still haven't found a good solution to this problem. However since all I really needed was to make relatively simple 3D objects for printing on my 3D printer and sending of to Shapeways, I found OpenSCAD more suitable, and 100% text based, which allows me easy checkins into git and changesets. Don't get me wrong, I think Blender is the tool for amazing 3D rendered images and animations, for my use however it was overkill.

I fear that this can only give a partial answer.

I wrote an add-on (totally work in progress..but whatever) which gives the python console in Blender a second function. Hitting Enter, executes normal python stuff, but I can type commands and hit Cltr+Enter and the add-on will read the current line and parse it and react to it. One command I do tend to use a lot is wipe it removes all objects/meshes, the code for it is pretty much:

The code for remove_obj_and_mesh() is: 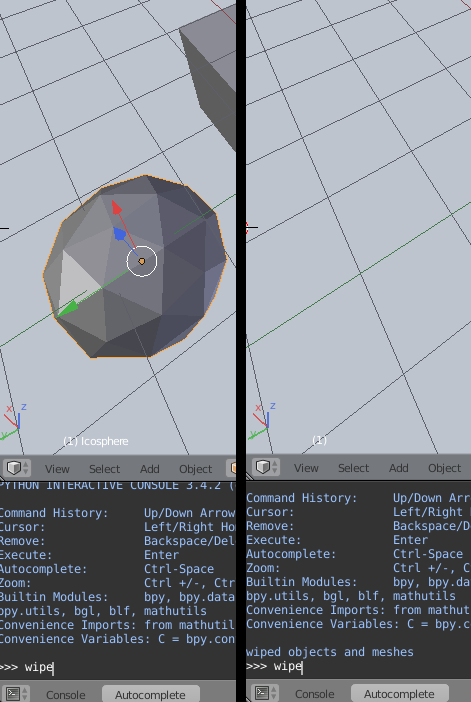 I've not tested that on hidden objects, but if you can link a representative file / blend state which you would like to wipe entirely or selectively, i recommend posting it and that will let us/me answer more concisely.

ps. blenderscripting.blogspot is my blog, i should probably change that code

which basically re-runs Blender using your script. This solution was provided by the user scurest in the first comment to this similar question.

2
Restart Blender each time a Python script is run