How to make a 2D ragdoll

I can't find a solution to my problem anywhere on the web. Maybe I don't know how to search for it.

I have this 2D character that is set up the same way that those cardboard cutout puppets with pins for joints are.

The idea is to give it a ragdoll behaviour from the neck down, its head being the only thing animated. I need this character to be on a 2D plane while in a 3D environment, its head floating around, always facing the camera with its limp body following the movement.

I cannot find a way to combine those tutorials I found about ragdoll physics, 2D physics, bone constraints, armature affected by gravity and make it work.

I guess it's a fairly simple issue to solve but it's become clear that I cannot do it on my own.

Thank you for your future help.

Following the comment of moonboots, I did this simple animation on Moho to show you what I mean.

Following the comment of Rich Sedman, I used hinge rigid body constraints witch works pretty great. The only issue left is rotation constraints for the body parts so I can avoid things like the elbows bending the wrong way. 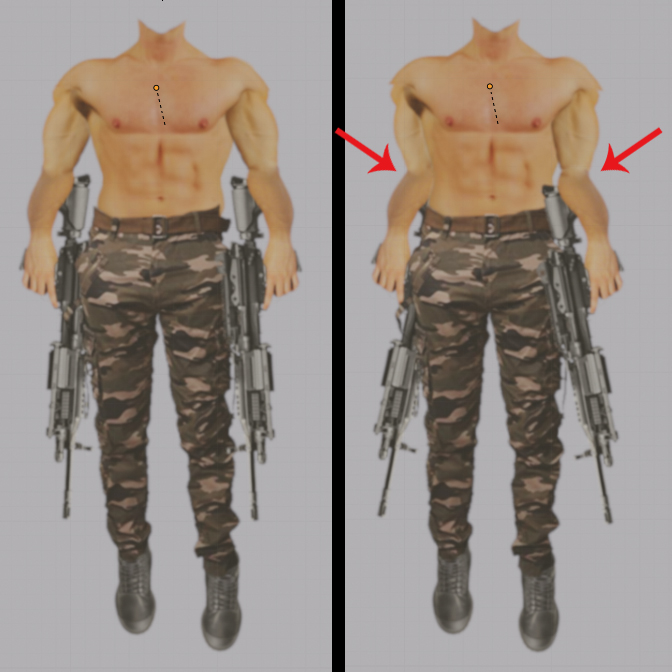 I've solved the rotation constraints issue, I think. I use the angular limits of the Z Angle of each hinge point. I wish there were a way to display those limits in the viewport so it wouldn't be so tedious to adjust.

But another issue showed up. I can't find the good way of moving the puppet around.

I understand that the hinge points are supposed to stay where they are at frame 0 while still affecting the puppet, wherever it is but it seems to upset my understanding of how to, ultimately, parent the whole puppet body to my already floating around head.

For this kind of work there is amaizing addon COA Tools addon for 2D cutout animation. I just dont see it for 2.8x, but it is still very productive to download blender 2.79 and do it in this version. Tool itself easily creates armature and with simple click you can assign sheets to bones. After riging its easy to open (or Append) in 2.8x project. Just dont forget to convert Blender Internal materials into Cycles (nodes).

Package includes also very helpful script for exporting layers with their positions from Photoshop or Gimp.

To get animation like in your example you can try to use Spring Bones addon.

To get properly rendered animation you have to bake bones animation- search for Bake Action with Visual Keying enabled.

Not the answer you're looking for? Browse other questions tagged physics 2d rigidbody or ask your own question.

1
How to setup reasonable ragdoll constraints between body parts?
2
How to identify mysterious physics force affecting my objects?