How do I join animations to create a multi-take animation?

I have a single fbx that contains multiple animations. They are in a sequence, separated by times only. Here is a screenshot from within Unity:

I would like to use them on a different model in Unity. Using the "Humanoid" retargetting is not an option because the hands are not mapped correctly.

I have found out that there is a new Add-On for Blender named "Rokoko". It allows to retarget animations. It's simple: You load a source and a target, then you click "Retarget".

The first problem that I experienced was that Blender wouldn't import all animations. There is a bug in Blender (it exists since ages and still does to present) which causes to only import the very first animation.

The only workaround that I found was to split the big fbx into hundreds of small single-animation fbx files using Autodesk FBX converter.

I can then import all these single animations in Blender, they looks like this: 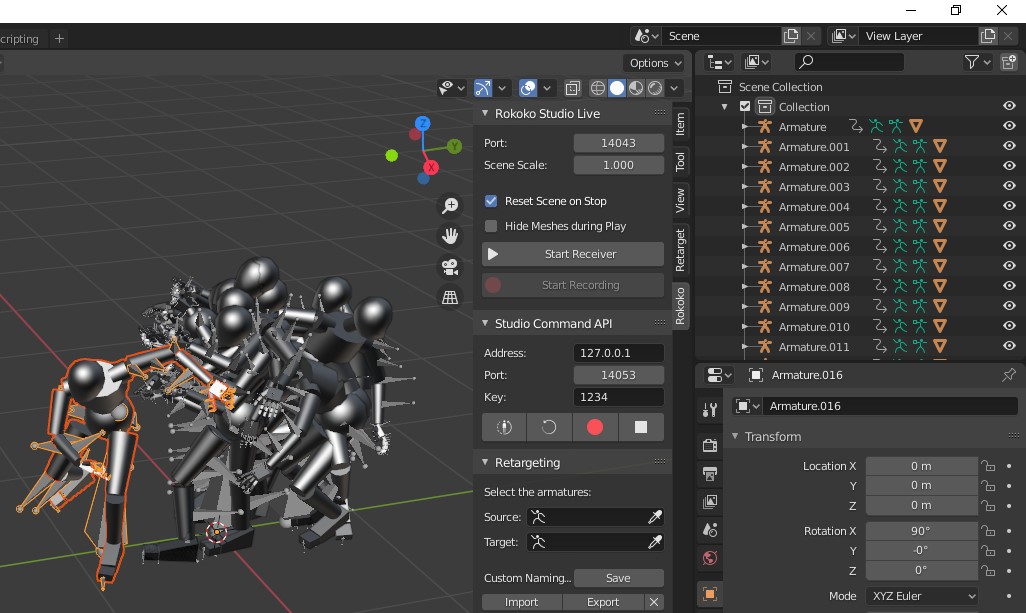 Rokoko however requires that animation source / target are in the same pose. Had Blender imported the FBX with the many animations correctly, I could simply pose the first frame and be done.

But I have over 100 single animations, and it is impossible for me to pose over 100 animations so that the first frame shows the same pose.

How could I solve this problem? Could I join these animations again within Blender? Or does anybody have a different idea?

I believe that if Rokoko would include the option to load a bind pose (instead of the 1st frame being in the same position), it would solve my problem, but I don't know if Rokoko would create such an option. But I think it would be great.

I'm Philipp from Rokoko. I gave this a try and the animations get imported correctly. Are you sure you are accessing them at the right place? Here is how to find them: https://i.imgur.com/rJnn7Bw.gif

Also using a bind pose is an interesting idea, I will look into that. But it's very likely not going to be part of this release version.

2
How to export animation to Unity
0
Animation exported to Unity is always Default Take
0
How to set default pose to Unity of model from exported as FBX from Blender?