I would like to create a complex animation in which two rigged objects - human head models in this case - merge together as they float next to each other with a similar effect that metaballs have on each other.

Is this possible in any way? I'm trying to find the best way for the skin to pull out from the parallel side of each head and have them merge (With the merged skin materials being seamless), similar to a metaball interaction but with a detailed skin material. The only example I can think of which is along the lines of what I'm aiming for is the split-face scene in The Thing (2011) (Very graphic) at the 2:20 mark. (I'm not aiming for this much realism of course.)

Like that but with the heads floating and magnetized to one another. I'm also hoping to have the faces animated on their own before the merging/smashing together takes place so they'll be rigged but this question is only regarding the mesh & material merging effect specifically.

As far as I know, you can't model and animate metaballs with as much detail and variation that a human face requires or convert part of a mesh into a meta object so would this work by keyframing the skin meshes towards each other in a stretching fashion then merging them into one mesh at the desired frame?

Combining the meshes with the Boolean modifier and then smoothing out the result is an idea worth exploring. Example: 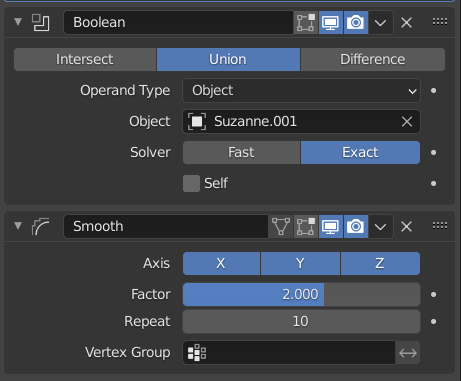 If the two faces have very different shapes, you could use a shape key to morph both faces into something in between, so that they blend more nicely.

You can also use additional boolean modifiers if you want to ensure that the merging faces don't pass "through" each other (i.e. if you don't want the moving monkey's right ear to be visible near the end of the animation, you could "mask" it out with another Boolean intersection modifier).

keyframing the skin meshes towards each other in a stretching fashion

You can also add various distorting modifiers before the boolean merge to achieve the magnetic stretching effect you describe (e.g. with a Lattice modifier or similar).

While the basics of this technique are easy to implement, you might run into difficulties if you want a more complex animation:

Reinis MazeiksReinis Mazeiks
2,3521111 silver badges2424 bronze badges
$\endgroup$
2
Add a comment  |
0
$\begingroup$
Want to improve this post? Provide detailed answers to this question, including citations and an explanation of why your answer is correct. Answers without enough detail may be edited or deleted.

i would say you'd use the metaballs movement as a shape key, copy the animation to a mesh, and use that animation for the two textured heads.

Not the answer you're looking for? Browse other questions tagged modeling animation mesh materials effects or ask your own question.