How do I render with frame_change_pre handler active?

I am working on a Python-driven scientific animation using Blender 2.83.1. The animation includes four watt meters which are visually represented by Text objects. Each text object has a custom property named "kw" which stands for kilowatts and is the value I wish to display. The text objects are driven to show the corresponding value using a handler and animated with keyframes. The color of the text is also changed to red or green depending on the sign of the number.

When I scrub through the timeline it works just fine in preview. However, when I attempt to render it, the hander does not seem to do anything and the rendered frames are all identical.

After studying Execute Python script between rendering animation frames and Handler frame_change_pre doesn't work in render which seem to be describing the same problem, and finding that the proposed solutions there don't work for me, I came up with an ugly workaround shown in the code below as a Python routine called slow_render. For each frame, it sets the frame, temporarily reduces the animation length to a single frame and renders that animation. This is ugly, slow, and only works if output is a series of still images. Also, I found that I had to set the frame twice to get the intended effect. I don't know why. 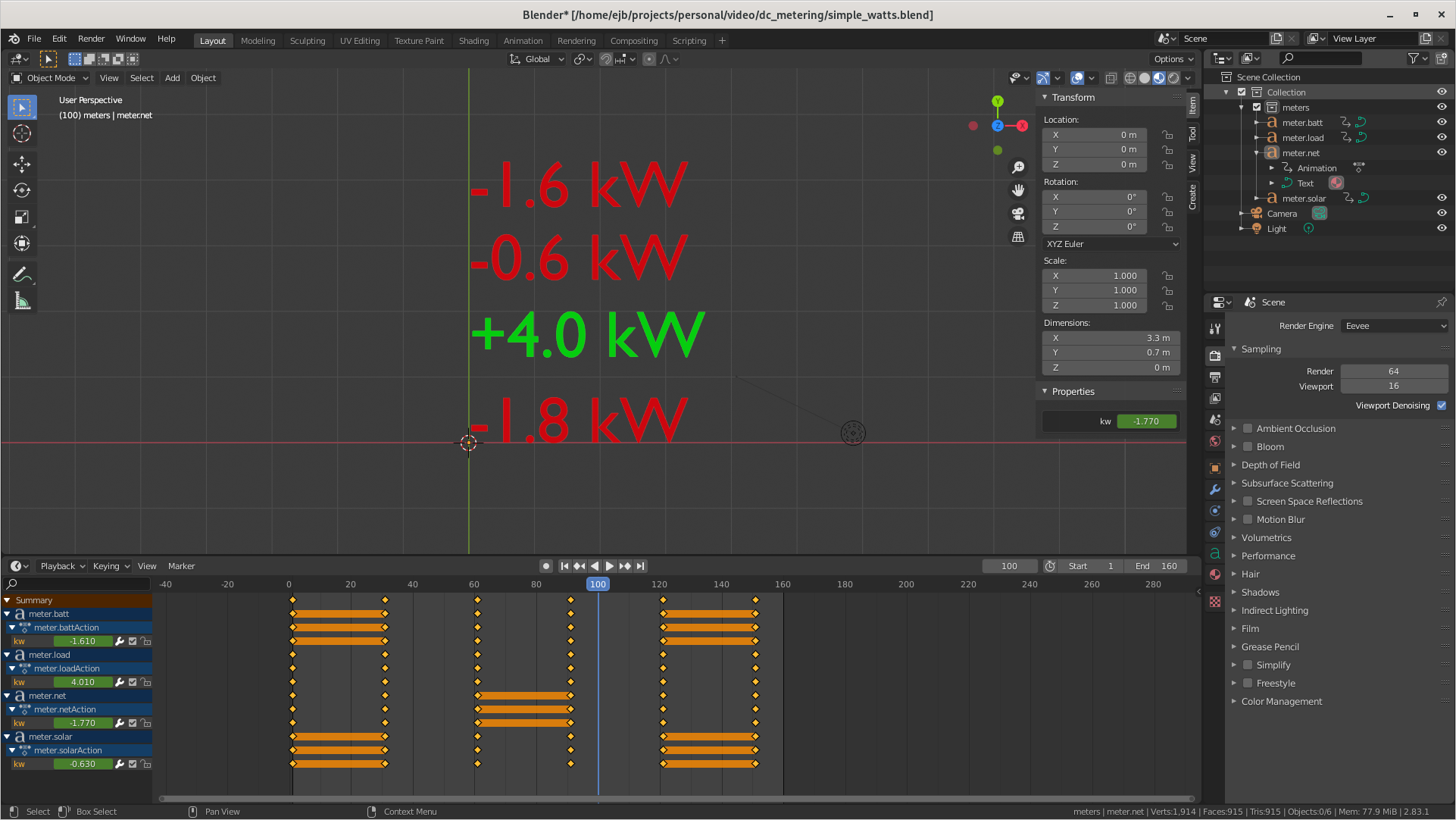 The code I'm using to drive this is relatively simple. It has a handler called my_handler which uses the value of the custom kw property to alter the text body. It also has a main routine which installs the handler as a frame_change_pre handler and then sets up key frames for the significant events in this simulation. The meters are named meter.load, meter.solar, meter.batt and meter.net. The first three are driven from data in the script and the last is calculated as the negative net value of the other three. In other words meter.load + meter.solar + meter.batt = -meter.net.

These are probably not relevant to the solution to this, but here are some additional details that may help reproduce exactly what I have here:

Based on the helpful feedback I received here, the video is complete.

Use frame_change_post, and evaluated object

Have added a collection to scene collection containing font objects with a "kw" custom property.

This property has been animated using keyframes.

To get the animated custom property value use the evaluated font object.

Not the answer you're looking for? Browse other questions tagged python rendering animation scripting or ask your own question.

6
Sun object not moving when Rendering Animation
10
Execute Python script between rendering animation frames
3
Handler frame_change_pre doesn't work in render
2
Script that supposed to change value of the text is only working on viewport
1
Animating text field, displaying dynamic scale of an object

4
Object transformations not applying when running Blender in batch mode
2
frame_change_pre handler only works once
1
Script not running as Handler or in Driver
1
Keyframe a driver / Triggering scripted expression with a keyframe
0
How do I bake my texture for animation?
3
Handler frame_change_pre doesn't work in render
1
Get frame to frame object location Blender 2.81 +