I opened the high poly mesh that was initially sculpted, with multires modifier on. (I did not apply the modifier) I duplicated the high poly mesh and made a low poly mesh using decimate modifier in the collapse tab with the ratio of 0.1. I UV unwrapped the low poly mesh, created a new image with default settings. I created a new blank material for both the high and low poly mesh and applied it to both of them. I opened the shade editor, and added a image texture node with the image created before opened up. I turned my render settings to cycles, GPU compute, and selected the high poly mesh and baked a normal map using the ‘bake with multires’ setting. Once the map is baked, I created a normal map node and connected to the material node to complete it. However, nothing seems to be happened… What would be the problem? I think the problem is in the unwrapped UV of the low poly mesh, but it is only a guess and I am still not sure… https://www.youtube.com/watch?v=bFOkHxZzVZ8 This is the tutorial that I followed.

https://drive.google.com/file/d/1FAElBG4TOwq6HVqRG3IiGr1LBfk6O9MC/view?usp=sharing Here is the link to the file. 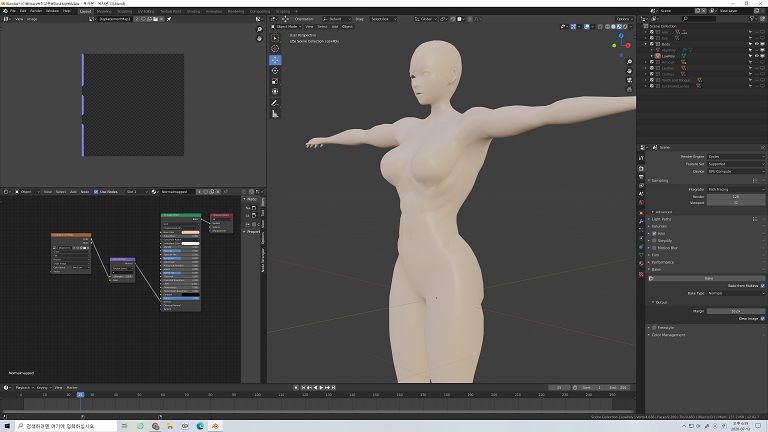 Bake from multires only bakes the information of the multires onto the same object. Since you used the decimate modifier, you probably changed, if not destroyed the UVs. That's not the option you need. You need to bake the normals with the option Selected to Active checked, with your highpoly selected and your lowpoly active and slightly inside the high poly. Do check the UV map of your low poly one though.

Also: Make sure to check the normals in rendered or shaded view, your screenshot is a bit too low res to really make out what's going on.

Not the answer you're looking for? Browse other questions tagged texturing uv texture-baking normals normal-map or ask your own question.