Usually walk cycles are symmetric which allow the first leg that moved forward to go backwards to its original position when the other leg starts to move, that creates the 'walk in place' effect.

I'm trying to create a non symmetric walk cycle, in which you always advance with one leg and close the gap with the other leg.

I'm not sure how to create a proper loop for the cycle, a loop the keeps the character in place so the following cycle will sync to the previous one.

You can see the issue here: https://www.youtube.com/watch?v=l5MYRZSlG1s

How do I prevent the sliding back after a step issue?

First, create a 6 step animation of your character moving forward. Don't move or keyframe the root bone for the moment, keyframe all the other ones. The fifth pose needs to be the same as the first one, except a step forward of course. The sixth pose is a duplication of the fifth so that your character makes a pause like in your animation. Don't forget to choose interpolation > linear.

Now animate the root bone only: Keyframe it at frame 1 as it is, then at the last frame make it go backward so that all the other bones are at the exact same position as at the first frame.

In the Dope Sheet switch Dope Sheet to Action Editor. Save your animation, push it down into the NLA. In the NLA, repeat the strip several times. Make the whole armature move from point A to B, make sure again that the interpolation is linear, move the second keyframe (or move the point B position) so that the speed of the armature in the scene synchronizes with the speed of the walk cycle (or play with the strip scale in the NLA N panel). You can also use a Follow Path to make the armature move, same thing you'll have to synchronize the speeds. 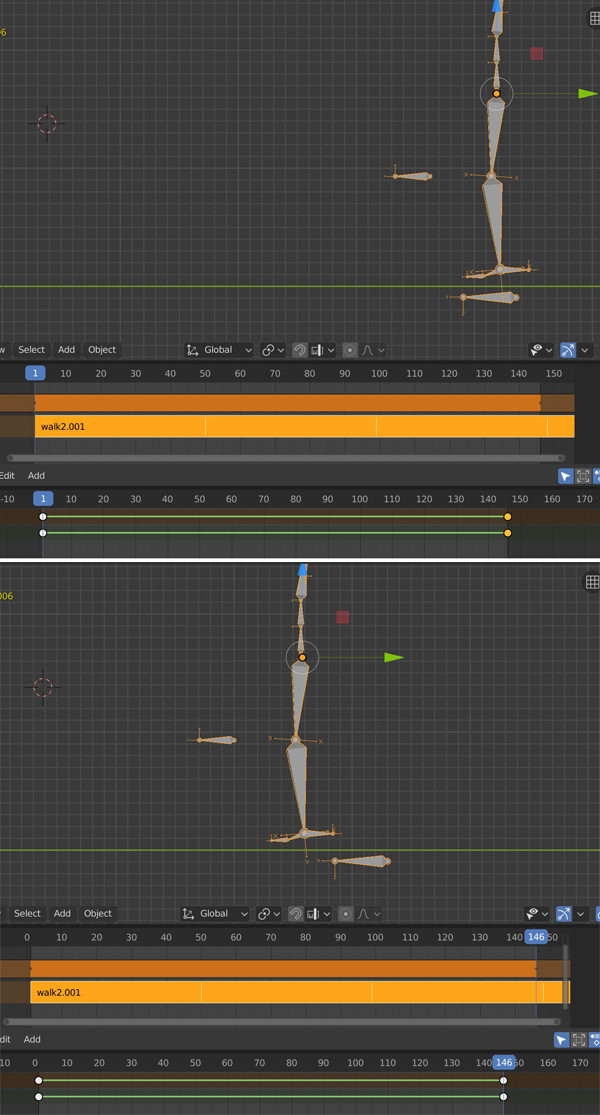 4
Looping walk cycle animation snaps back on repeat
4
Transitioning from Walk Cycle
0
Character Walk Cycle is not working properly
0
Mixamo walking animations, how do I stop them from resetting position?