How can I parent objects so that only position and not scale is applied to the children when scaling the parent?

I've got this fairly complex setup of a tom-tom drum here. My goal is to be able to scale the drum to different sizes and have the models around it scale and move into position as required, so that a simple scale operation gives me different sizes of drum that don't look out of proportion. 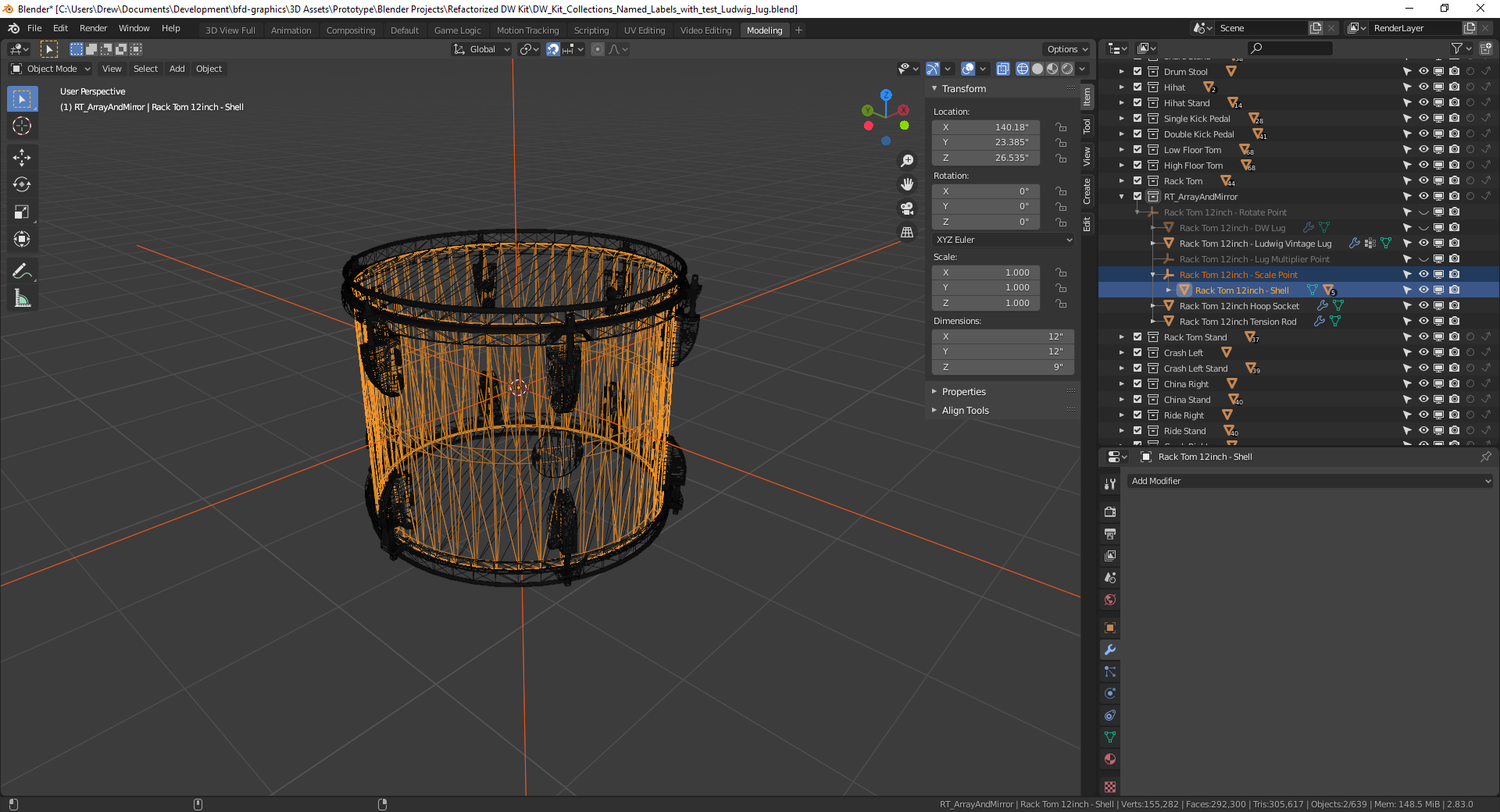 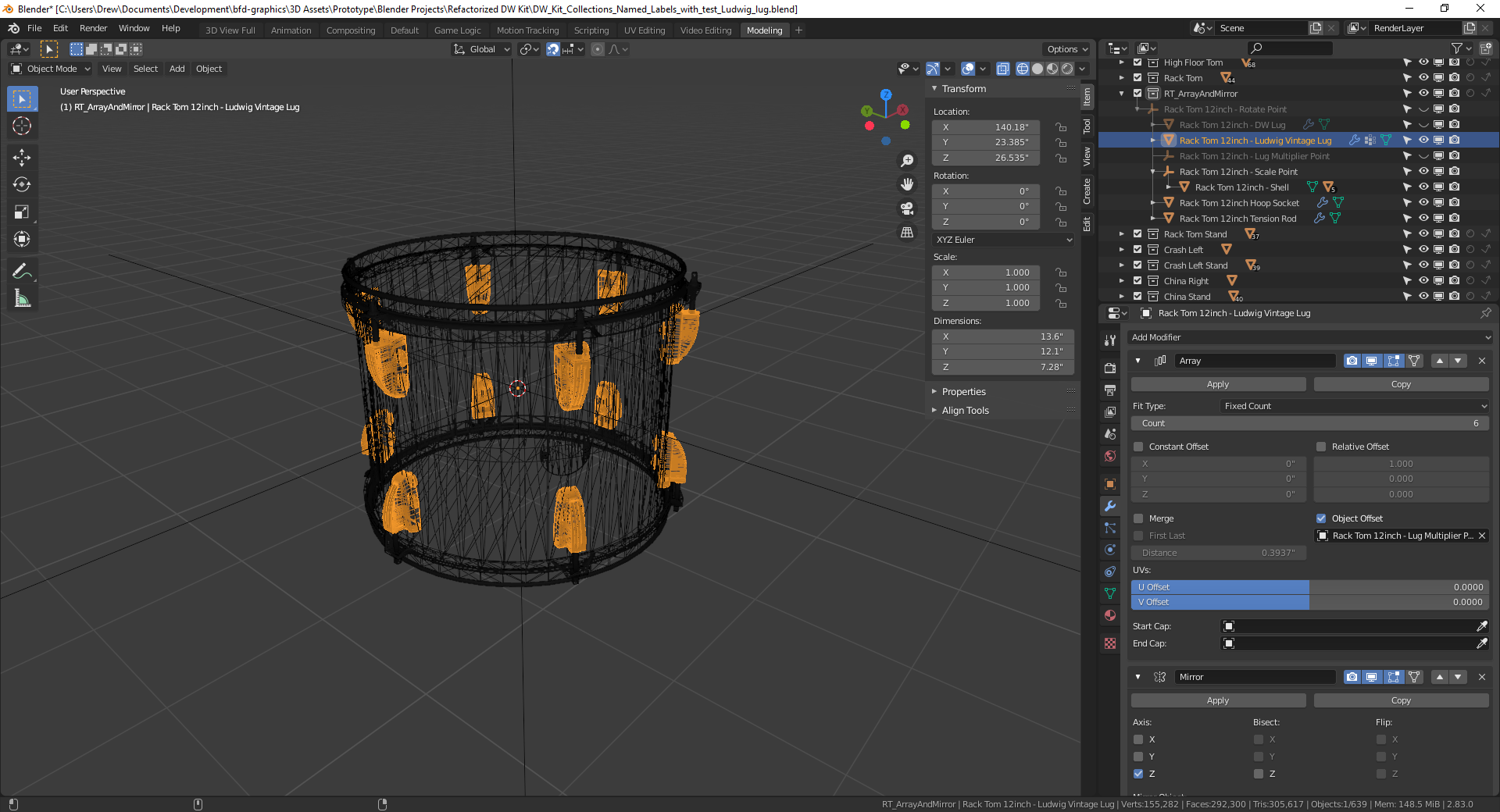 The lug is parented to a plain axes object (called the lug multiplier point in my scene), which is at the centre of the drum with a origin that is also at the centre of the drum. The array modifier for the lug also uses this as an object offset. This way, I can rotate this plain axes object in order to better position the lug duplicates around the drum - by dividing their count by 360 to get the Z-axis rotation value.

All of those elements are here: 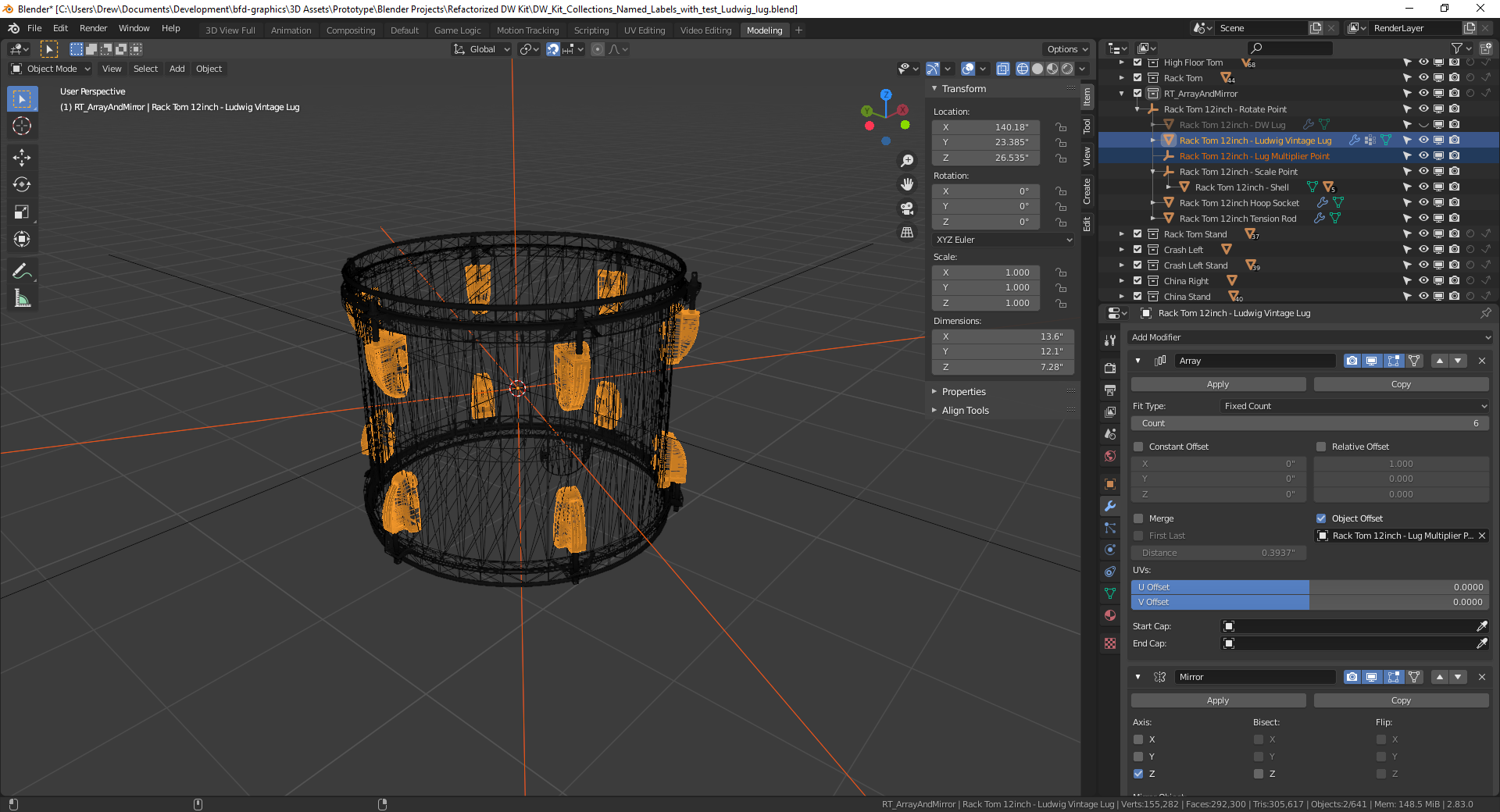 The same thing happens with the lug tension rod, and the lug holes on the drum hoop, as in the following image: 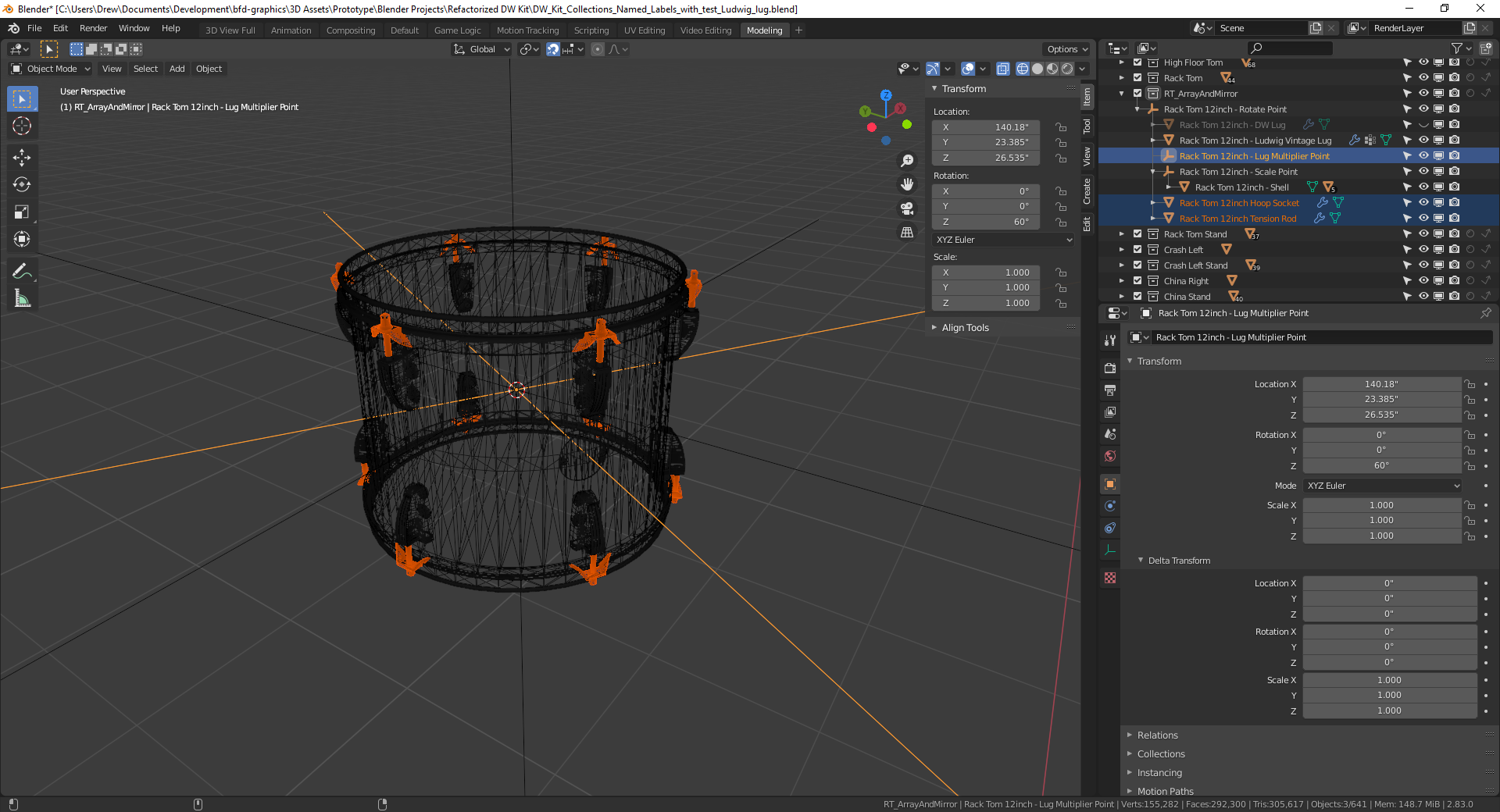 Finally, I have the drum shell, drum skin, and drum hoop all parented. The hoop and skins are mirrored also, to create their relevant counterparts on the bottom of the drum. 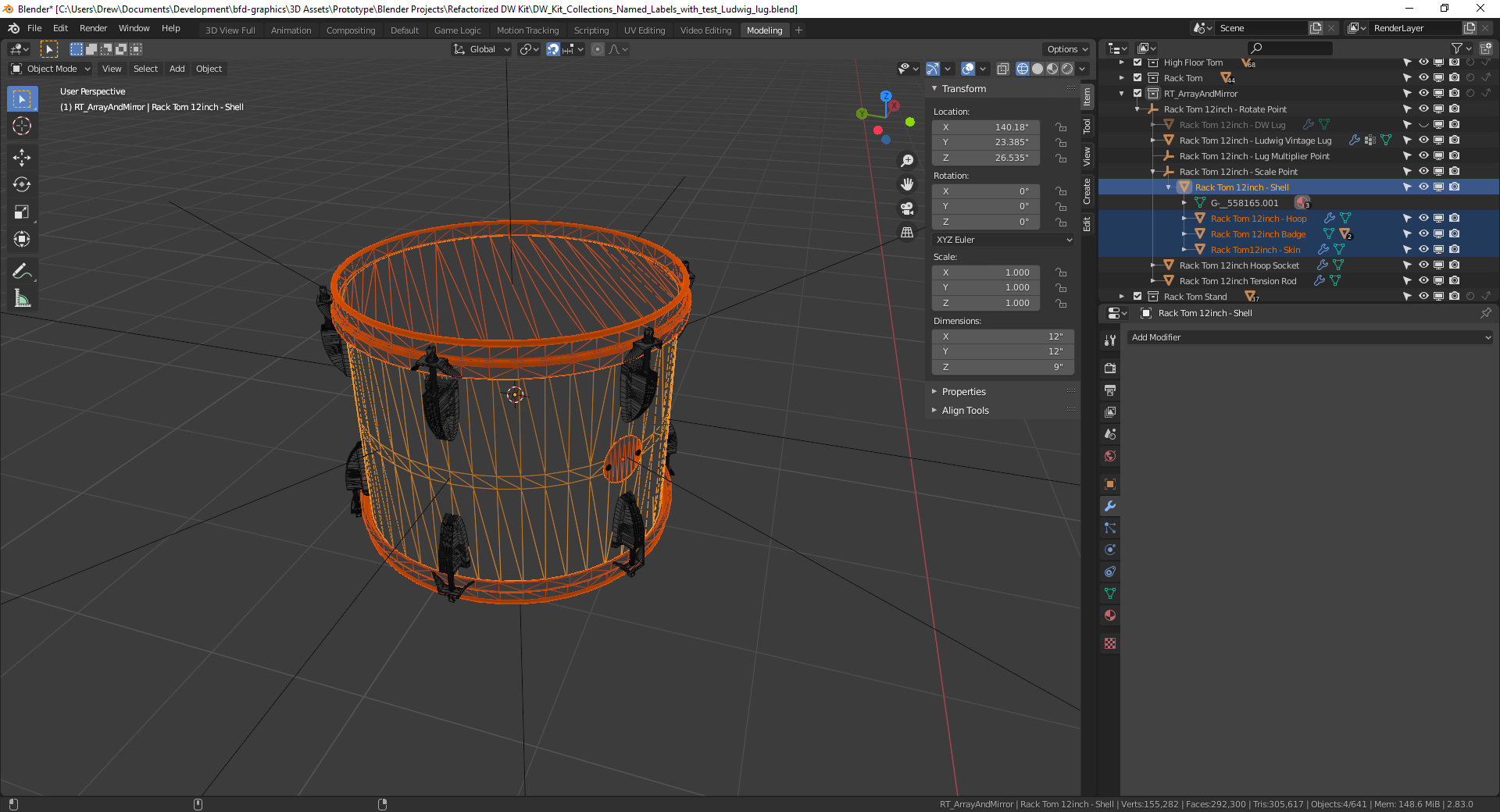 So all of this works pretty well. I can change the number of lugs, tension rods, and hoop lug holes easily enough. I can also scale the drum and change the size of the hoop and skins along with the shell.

What I now want to do is be able to change the positions of the outer elements when scaling the drum, so that everything maintains it's proportion - the outer elements should not scale their size, they should just change position. I can't quite get this to work.

Anyone got any advice on how to essentially shift the original lug elements across the X axis, away from it's origin point so that it maintains its distance from the outer shell? I'd like to do this based on scaling the shell if possible.

If I edit the lug in edit mode and shift the vertices manually across the X axis, then I get the repositioning behaviour I want.

You can actually parent to a vertex to achieve something like this.

I hope this makes sense - only limited time to submit this answer. I can add more detail if this seems helpful (unless someone else wants to add a more detailed answer along similar lines).

If you create a Child Of constraint for the child objects, you will have the option to decide which transforms come along with the parent and which are left independent. Below is a cube parented to another cube in this way. The Scale checkboxes have been unticked. 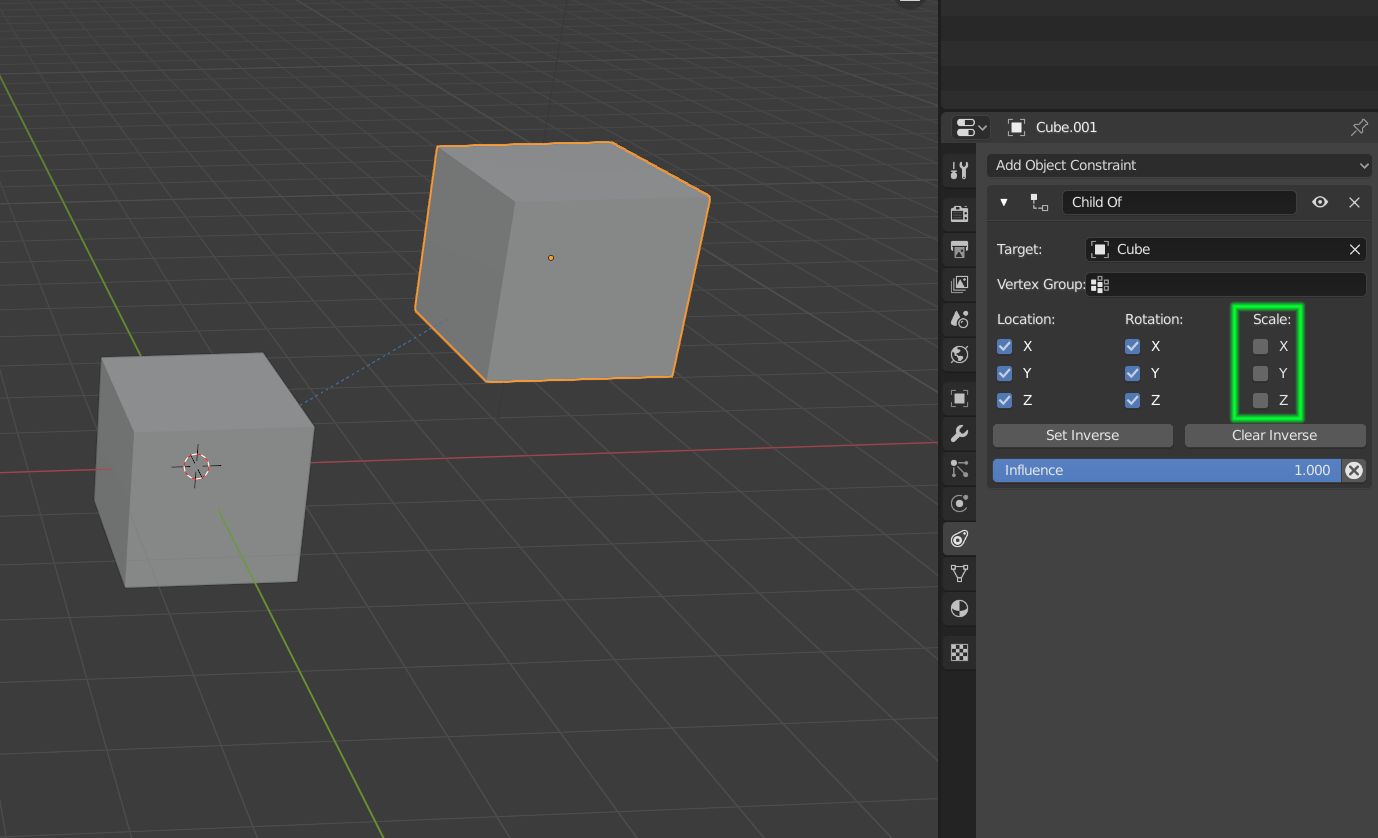 And the result is that the child moves when the parent moves...

... but the child doesn't scale when the parent scales.

Not the answer you're looking for? Browse other questions tagged modeling modifiers edit-mode geometry scale or ask your own question.

0
Object being squished when using object offset in array modifier
0
How to convert an object transformed by a Hook Modifier to an object with Loc,Rot,Scal Transformations?
1
Duplicating object along curve
0
Boolean modifier is not applied to the array objects
1
How to obtain a set of separate objects from an Array Modifier (or other method) and keep their rotation and scale?
0
Array modifier - duplicate around a circle produces strange results
1
Why can I see the inside but not the outside of some objects?