I've been attempting to recreate a game's cel shading and am currently stuck on making speculars function.

The main issue is that the speculars are done manually using both the red and blue channels of a specific texture, and that the Red channels determines "Intensity of Specular Highlight" and the Blue Channel determines "Ease of entering highlights".

Here's how it looks in the game in question with a model reference and the texture used for lighting: 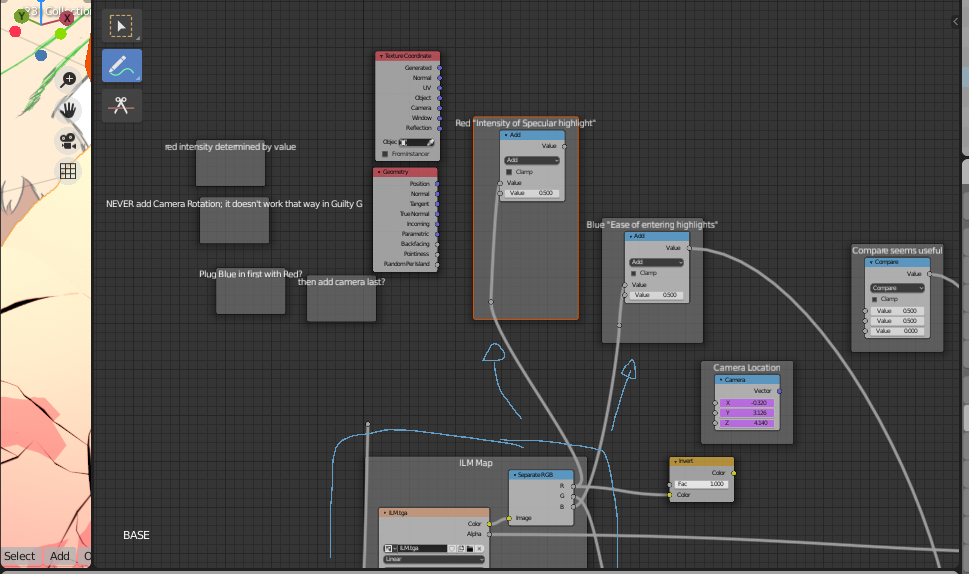 Not really sure how to go about this now, considering the lighting is not natural and actually tracks the camera in-game, though I thought I should plug the camera in last after the actual calculations are done first.

How should I go about this? Can I somehow "factor" the Blue with the Red somehow like a Mix RGB node?

Ok so I spent a lot of time on this last night, and I don't want to all go to waste, so I'm just gonna post it, in the hopes that you might find ANY part of it helpful. If this doesn't help you at all, let me know and i'll delete this answer - it is simply far too much to put in a comment.

I think I understand what you're trying to do, but without access to an image texture with shader values embedded in the color channels, I'm shooting blind somewhat. Hopefully this setup, or some close rearrangement, is able to give you what you are looking for. I'm not really familiar with defining specular highlights this way, so I'm doing my best to translate it to what I know.

Generally, when making cell shading, I simply drive a Diffuse BSDF through a Shader to RGB and into a ColorRamp set to constant, with three or four harsh cutoffs. 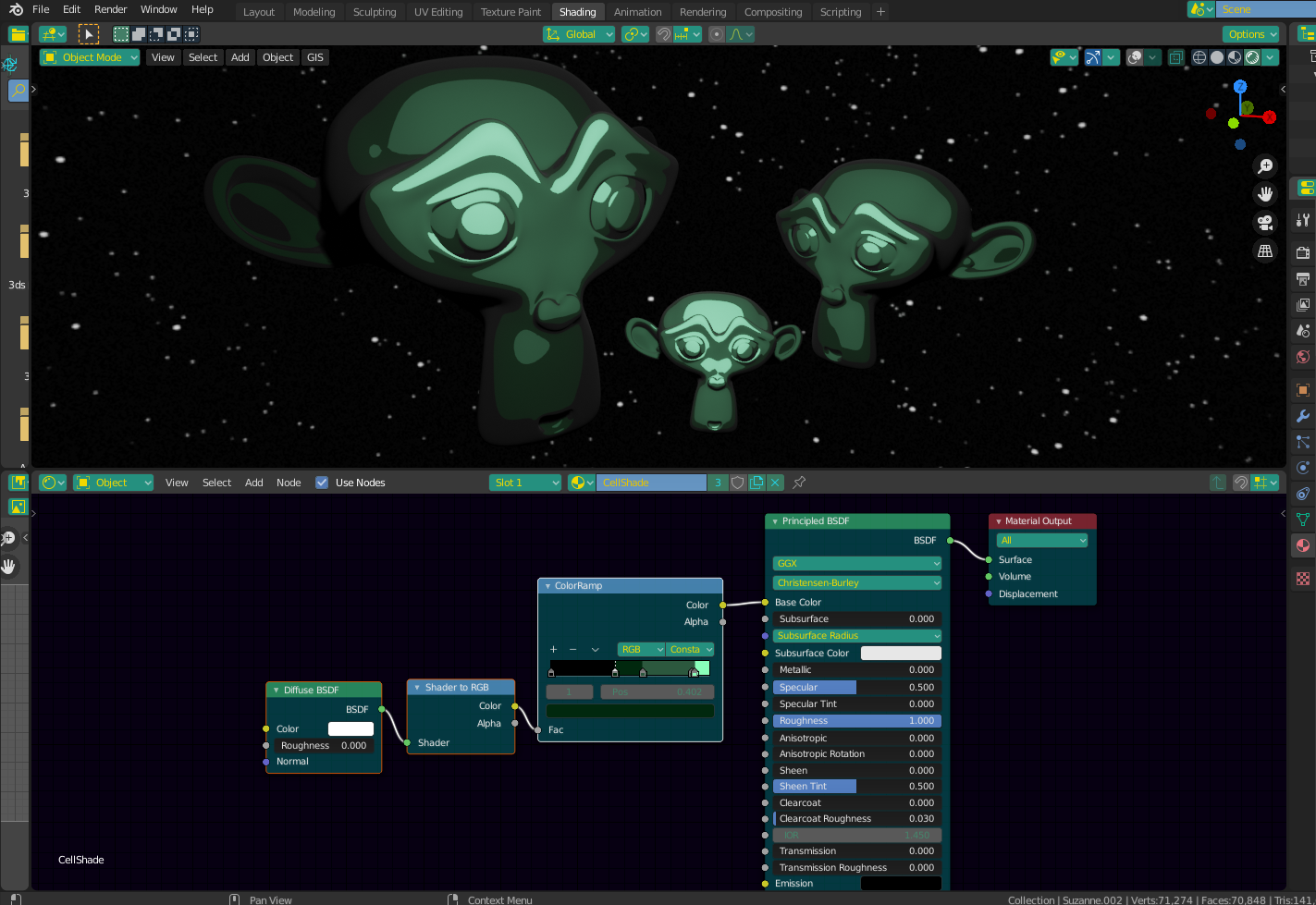 If I am trying to cell shade an existing texture, I use a MixRGB shader set on multiply and mix the texture with the result of this ColorRamp, to apply the "harsh shadows" from the cell shading to the texture. As you can see from this image, I multiplied the texture by the ColorRamp values twice so I could have an extra strong contrast for this example image. You may or may not need this. 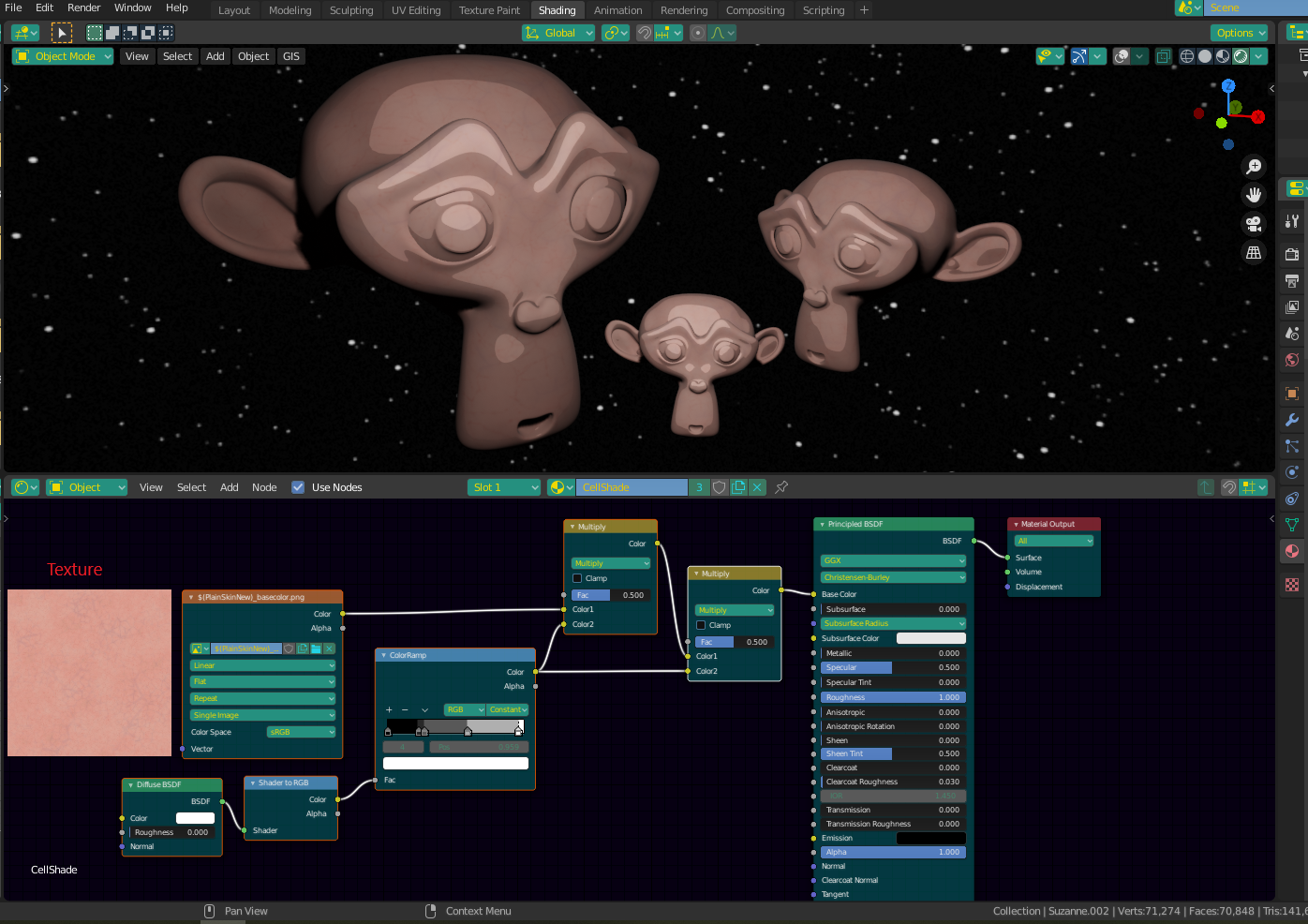 Now, on to your specific case (to the best of my abilities) You said the blue channel defines the "easing" of the highlights - I think this represents the shadow level cutoffs like I specified in the ColorRamp. Here's where I'm divided though. The wording (easing) suggests the presence (or lack therof) of a gradient between the different light levels - cell shading is generally defined by the lack of a gradient, therefore I think this would be represented by the "constant" cutoff I used on the ColorRamp, as opposed to "linear". However, I do not know how much this also includes where the light cutoff points are. This brings me to my next issue - the red channel - the "intensity" of the specular highlight. Does this mean the brightness at certain cutoff levels? if so, does this mean that the blue channel determines where the "light level containers" are, and the red channel determines what actual "light level" they each get filled with? I have to assume that it must be something like this, because the only other use of "specualr intensity" I can think of refers to how much the specular reflection takes on the hue of the diffuse color, which generally only applies to shiny metallic items, which I don't generally associate with cell shading. Maybe that's the case here - maybe they're trying to use metallic values to drive the hue of the "shaded" area - I don't know and if that's the case, I have no idea how to do it.

So, given all that I know, and all that I don't know, here's where I am: I was thinking some setup SOMETHING like this might get what you want, but I don't have the image with the separate channels, so you'll have to try it yourself. Maybe if you just switch up the node connections randomly you'll miraculously stumble upon the answer. I've done all I can - the more I look at it at this point, the more I feel like my eyes are bleeding. 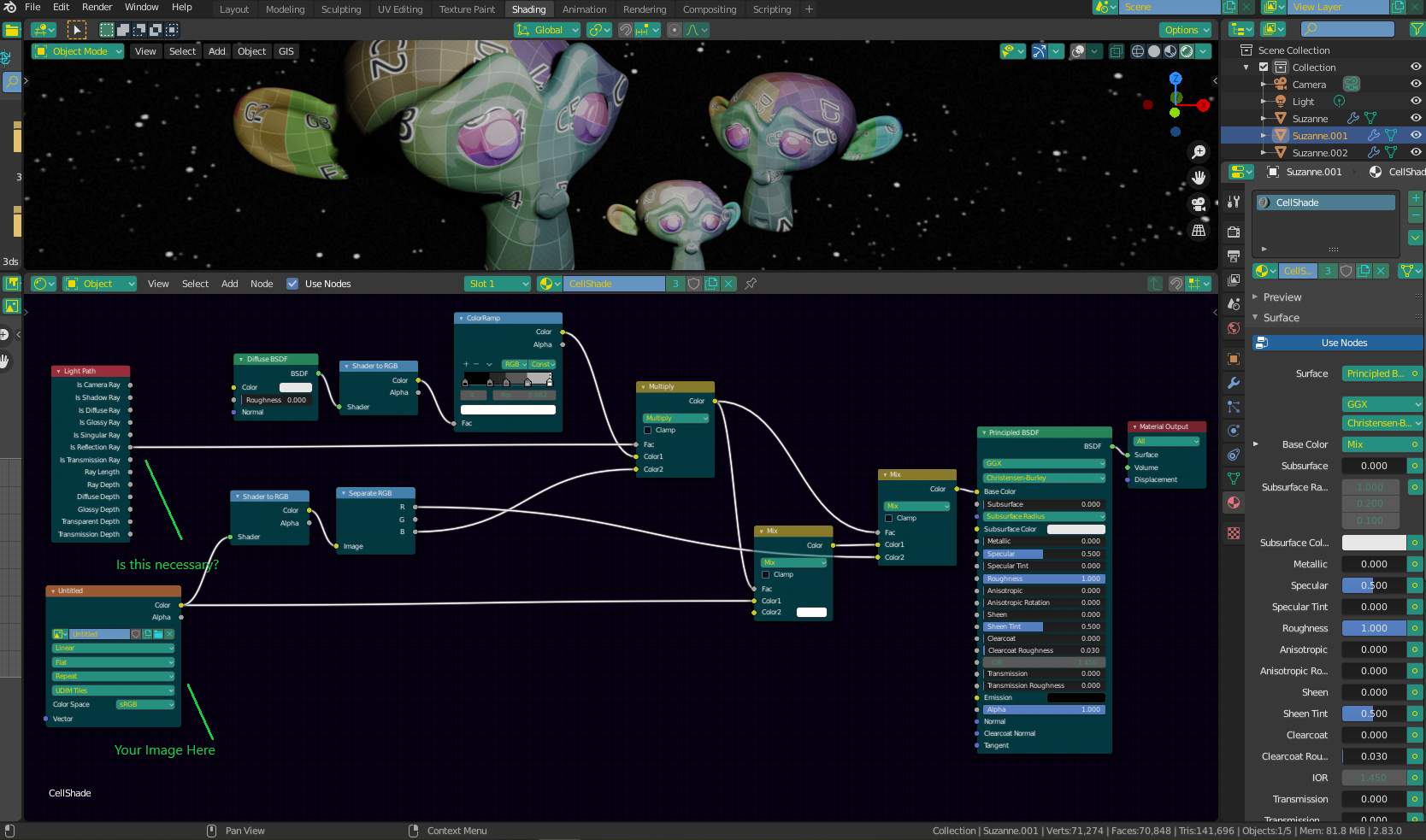 The brief explanation is this (though keep in mind I'm totally lost at this point). I used the reflection ray to drive the mix of the shadow cutoffs based on reflection angle with the "easings" in the blue channel. I have no idea if this is even necessary. Anyway, I then used this "shadow combo" with as a mix factor between the original image (if there is one) and white "highlights" . I have no idea what to do here if there is no "original image" texture to work with.

Anyway, I then combined this "shadow+image highlight" combo with the brightness and color values of the red channel, using the shadow values as a factor (because it gets info from the reflection ray - again I don't know if this is the right way). So that's it. Hopefully by playing with some arrangement of this setup you can come up with something at least workable.

Let me know if it works out.

Not the answer you're looking for? Browse other questions tagged node-editor light mathematics or ask your own question.

1
Diffuse color inheriting from background
0
Creating mesh on a surface with two variables
3
Creating sinusoidal struts using bpy
5
How to calculate Specular value for Principled BSDF node from IOR?
3
What is the math for the B-spline interpolation of a color ramp with two color stops?
0
Access color channels independently of alpha with Cycles?
1
Generating blue normal map channel from red and green channels
0
Mathematics behind creating shapes using math nodes
4
Metallic vs specular