Video Clip is Being Rotated in Movie Clip Editor

I've seen a question similar to this one, but it didn't answer my problem. I have a video that I took on my phone that I'm trying to open in the Video Clip Editor, but whenever I open it, it is rotated sideways. However, the video shouldn't be sideways, because when I play the video in a player like VLC, it is oriented correctly. It seems like Blender is changing the orientation of the image when its opened. I'm not sure why though. Is it because of Resolution settings? I've got the resolution X and Y values set to the dimensions of the phone picture size, so that shouldn't be the issue. Is there an easy way to rotate the video IN the movie clip editor? Thanks

After @moonboots' suggestion, I tried using the Video Sequence Editor to flip the video, following this video that @moonboots posted: youtube.com/watch?v=hfo-DRGvkgo

The result worked when I rendered the animation and loaded it into the Movie Editor. However, I had this issue where I had a sliver of video at the bottom which was just alpha. What did I do wrong? Here's an image of my settings. My video width x height is 480 x 800 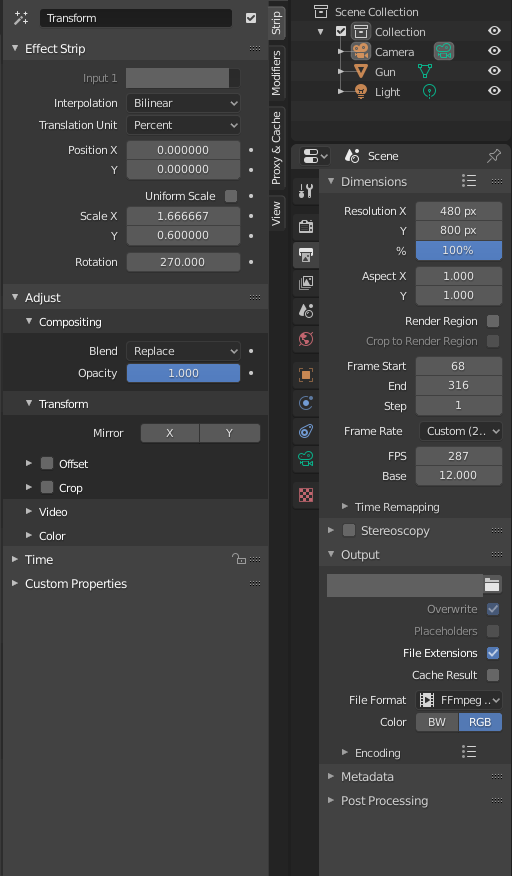 Browse other questions tagged tracking movie-clip-editor or ask your own question.

6
My markers in the movie clip editor keep “moving” around - what gives?
2
How to export a 2D stabilized movie clip?
1
How to show a tracked video in 3D view?
1
Movie clip editor playback problem
3
Movie Distortion Node in compositor does not respect optical shift values from Movie-Clip-Editor?
1
How to correctly LOCK motion tracking points so they don't move after reloading movie clip?
0
Can't Adjust View in Movie Clip Editor
0
Camera tracking; movie clip does not show up as background footage