I followed alot of hair tutorials but what I don't like about the hair is that it's always too perfect. It's like fresh from the stylist. So I wonder if it's possible to create more natural hair that's randomized into a more messy look with strands everywhere without having to create every strand manually. Is there a way to somehow randomize the messyness? I have tried with the wave and curly settings but they only create curly and wave over the whole hair body and not just single strands and these "flying" single hair fibres. 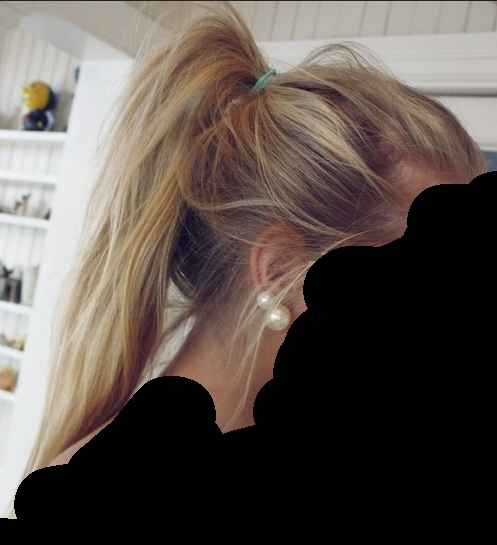 Use the technique by Nazar Noschenko in his Youtube Tutorials

Multiple Particle Systems for different parts of the scalp with few parents and many children to have maximum control.

Messy hair is the result of positional varation and well-placed hair strands (parents). I'd advise to use multiple systems for "types" of hair.

Messy realistic hair will have many additional properties (which can be easily researched on the internet and the manual):

I will only focus on the first positional variation. I would also limit the children to the simple method.

If you require the strands to end neatly as if trimmed by scissors, you will have it easier using interpolated children. If you want to be able to part the hair or create individual strands with greater control, you should use simple children. 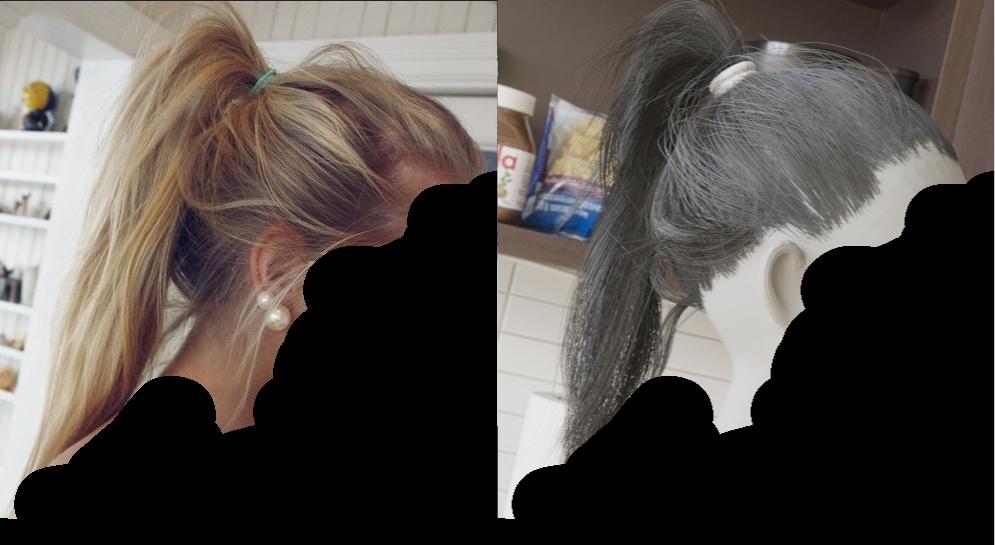 I have color coded the systems with different settings. Use at least seven segments for the hair to gain control when editing the strands shape in particle edit mode.

With only jittery (messy) hair, we will have difficulty covering all of the scalp. I added a base layer (scalpA and scalp B) to cover the scalp intially. 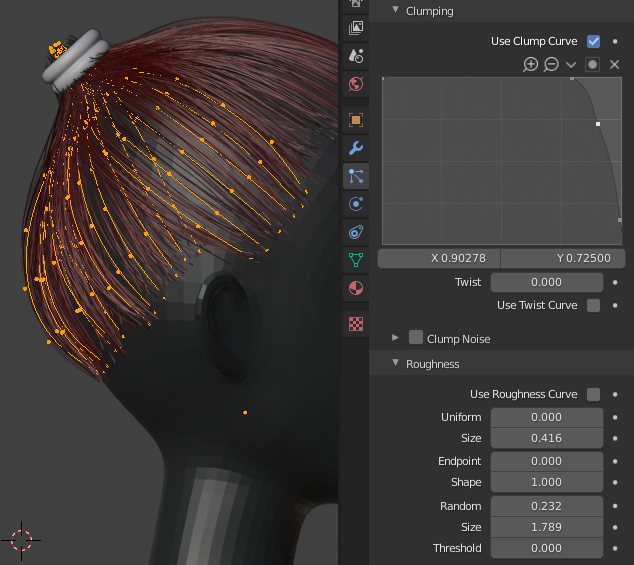 Use the Clump curve to clamp the ends of the hair together. This way, we can prevent stray hairs from penetrating the hairband. I also added a slight amount of roughness to randomize the hair. If you don't add roughness, the hair will be to uniform and quickly form bands around the parents, which almost look solid.

I added another particle system for the ponytail to have more control over it. The children for the ponytail have a larger Radius, since the hair at the ponytail is more loose. (The hair on the scalp is tightened by the hair band.) In particle edit mode, I varied the length of the parent strands. Using the clump curve, I clumped the particles together at the beginning to prevent the hair from intersecting the bands. This is the reverse of the scalp hair, which gets clumped at the end. I also increased the random value, but set the threshold to ~50%. This means, that only 50% of the hair will be randomly offset. The result are clear strands in the ponytail, with 50% of the hair jittered more randomly. This supports the notion of some hair beeing distributed when the ponytail is tightened due to friction and some hair straightened, because it gets pulled.

Moving on to the more messy jittered hair, let's overlay another system above the scalp systems. I used very few parents with very large children Radiuses. The clump curve decreases towards the end and a high random value is used. When combing the parents, I tried to introduce more variation in direction. Most strands conform with the scalp layers at the first segments, but go in other directions thereafter, which would come from the hand brushing against them and/or gravity pulling them downwards.

After the base layers, I would add more refined layers, which apply to the specifications of the character.

Hero Strands stick out. Using the clump curve, they initially grow thinner, which increases the density and makes them more refined. You can use them to set accents. They have to be distributed manually and with care, as they are easy to distinguish. Use varying length and shapes and don't put to many hero strands next to each other.

The messy strands aren't really strands, but rather parents which control a bunch of disconnected hair. Just like the hero strands, I would distribute them manually according to character specifications. They use high values for Random and for Endpoint. The endpoint property scatters the children at the ends. With this system, we can add singular hairs to multiple locations. I use it for short hairs or hair ends, where the hair did not fit into the hairband and is too disorganized.