Limit on MixRGB nodes per material? Or How to render out an image sequence

I was trying to figure out how to batch process out a bunch of different materials on an object.

I have multiple works that are the same size and I am trying to figure out how to quickly render them all out without having to change materials (art works) for each render.

I thought that I could set up an animation, with MixRBG nodes animated to change on each frame.

I can get 8 mix nodes and they seem to be working. On the 9th node, I get the pinkie of doom! It doesn't matter if it is a repeated image or new image. It still shows pink.

I did test to make sure that the last image was valid and accurate. I even switched to a different image/folder. Same issue.

Which suggests to me that I over stocked the memory, as @DuarteFarrajotaRamos suggested.

So I can do 8 frames and then rebuild the material. Or I can try doing 33 different planes and animating their visibility.Seems a bit excessive.

At 8 nodes it works: 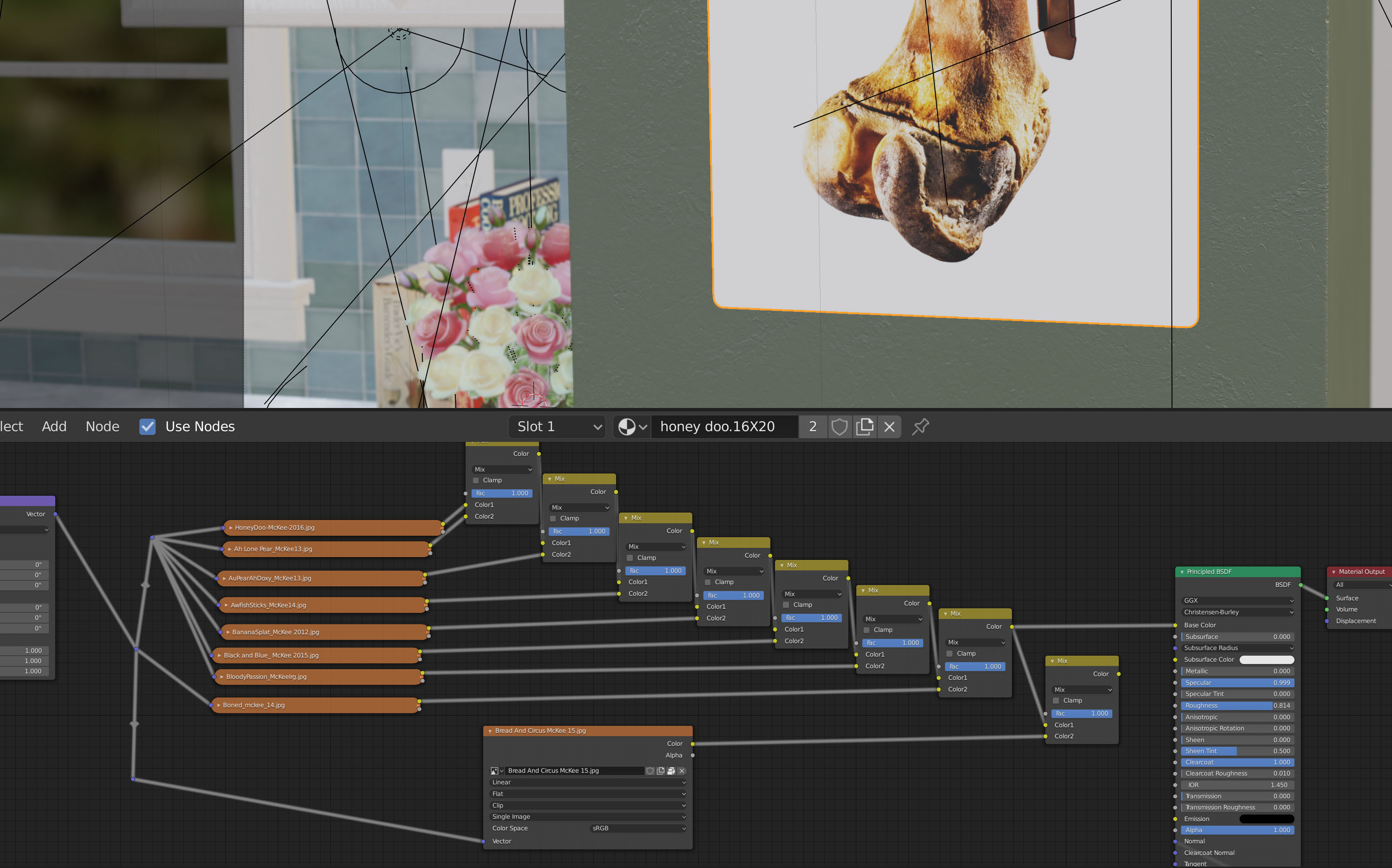 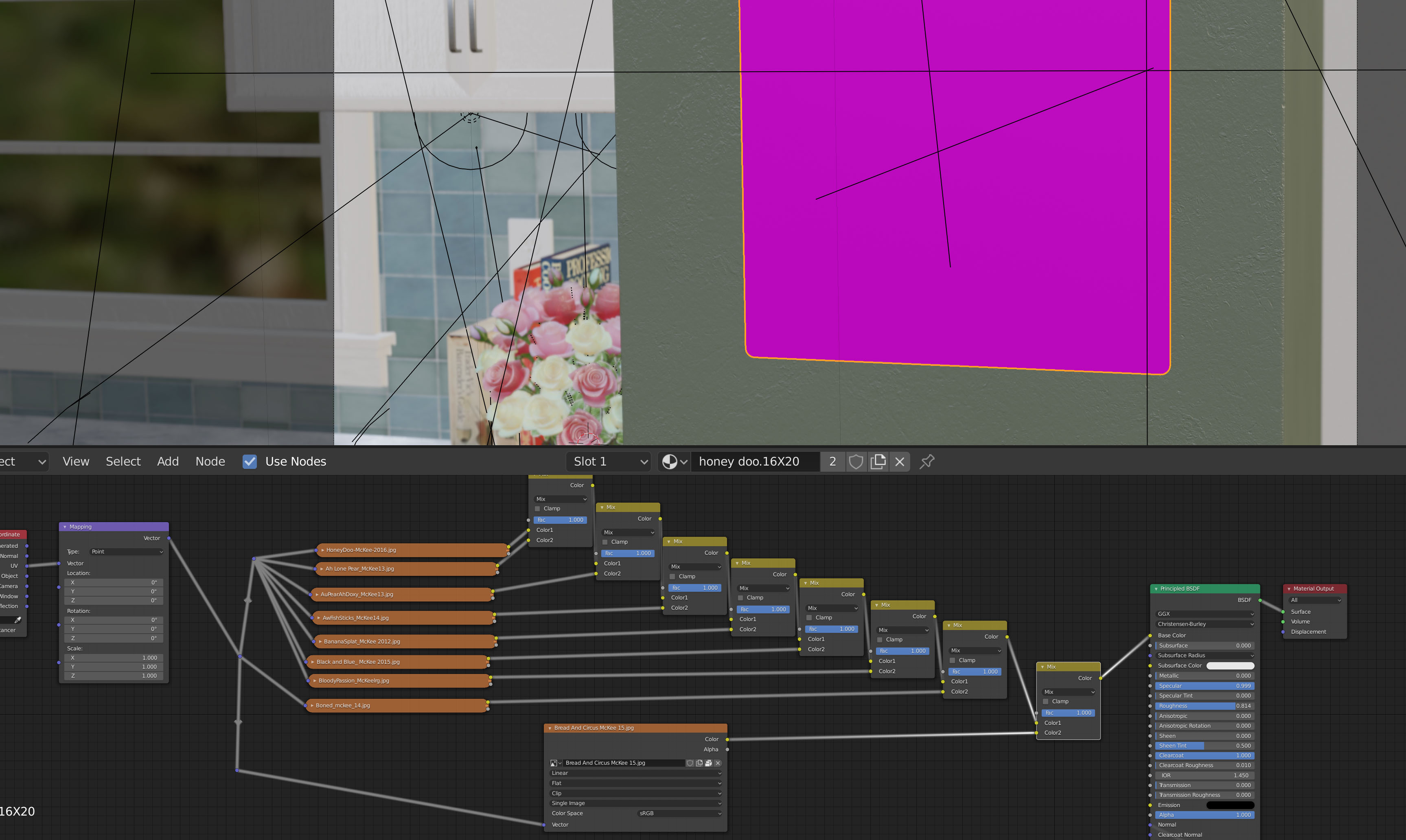 I tried running a test on No-Can-Do's concept. It really seems like it should work: In materials preview, I can see each image change as I scroll forward.

It works in the cycles preview as well.

But, Render Animation (and render frame too) disregards the image sequence completely. Immediately after attempting a render and getting just the metal surface, Blender seems to forget the image sequence all together and both the Material Preview and Cycles Preview no longer have the image sequence. It is still in the nodes, but not showing up.

I think I am missing a simple step somewhere but I am not sure what it is!

Image sequence in the material 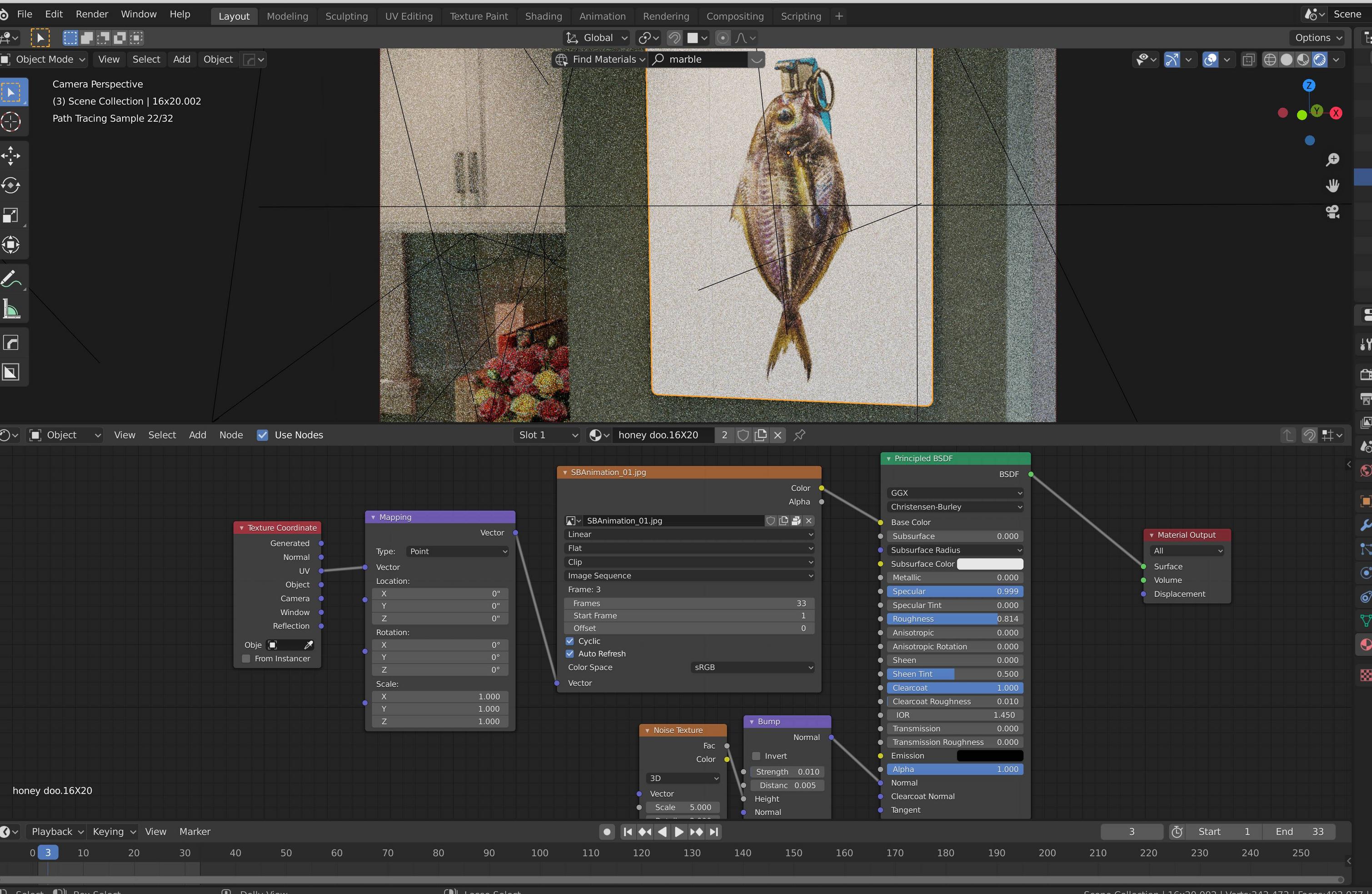 Rendering doesn't include the image sequence. 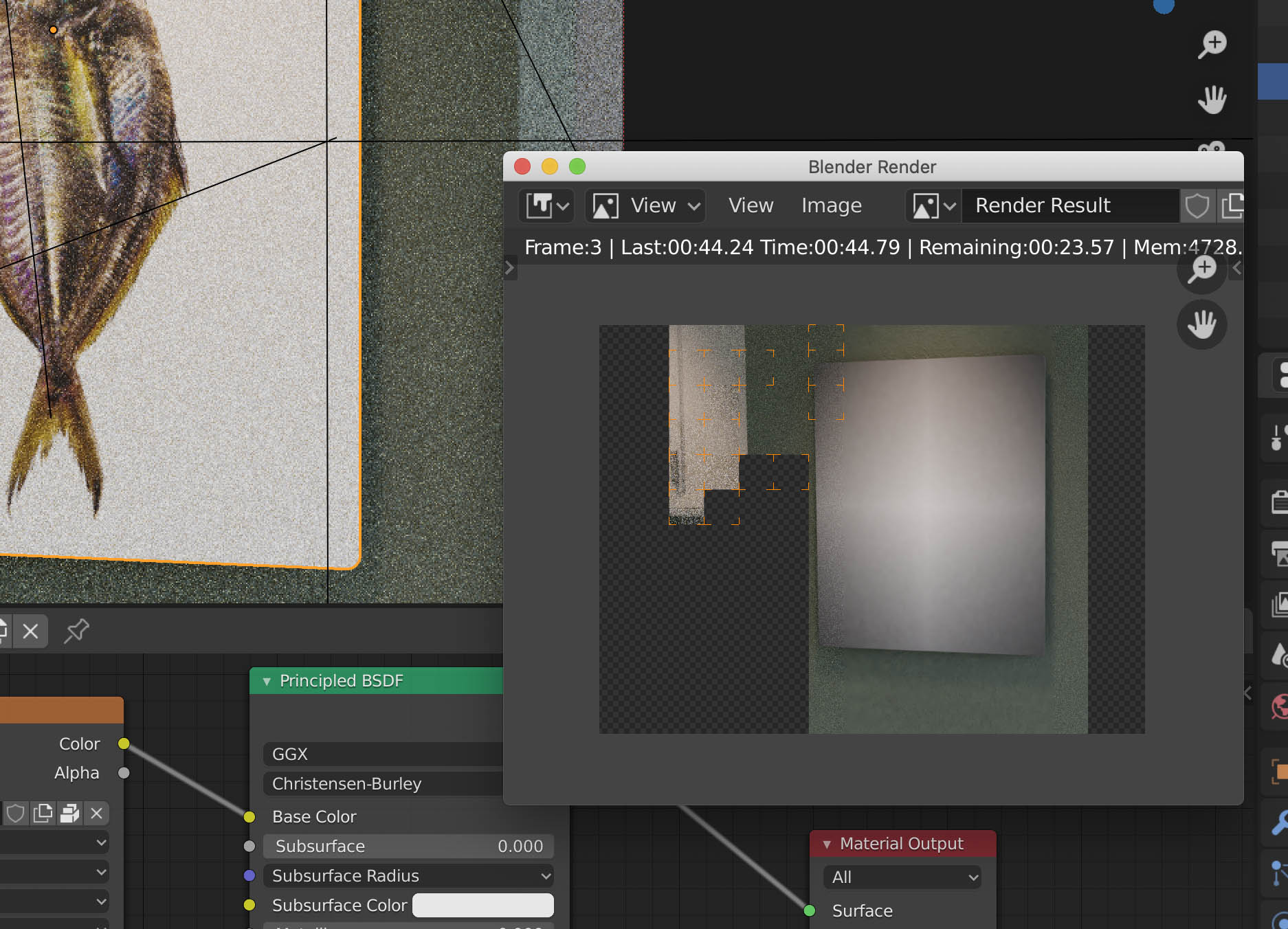 The image is gone in the preview as well. 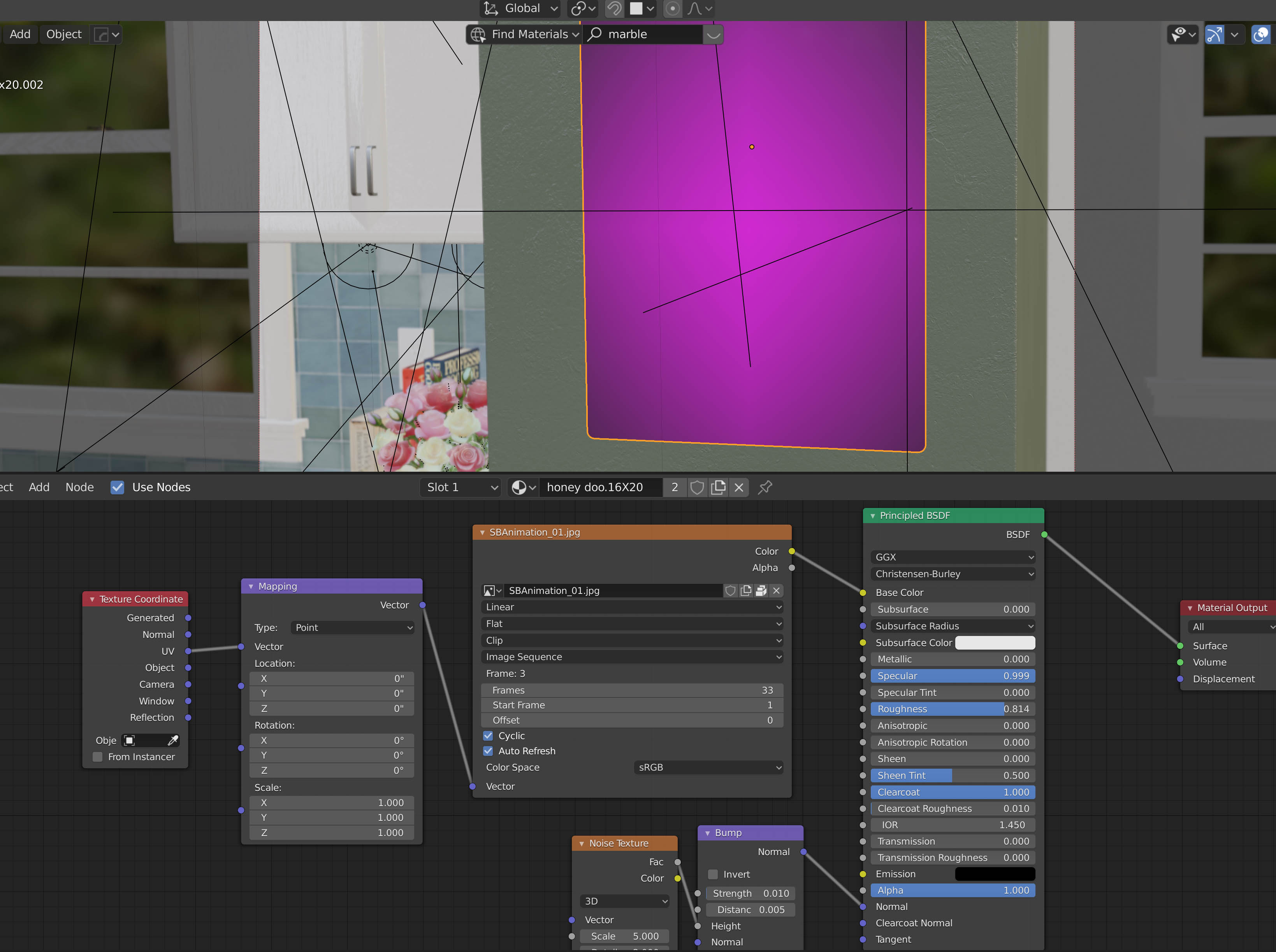 Okay, so the original challenge was to create a material that would change every frame, so that I would end up with 33 images that would have a different art piece on the wall.

First, I tried using a mixRGB shader animated to switch between images. But, I got stymied by a memory problem. Blender would only see the first 8 images before it seemed to lose its mind.

Then, on a recommendation from @no-can-do , I switched the image texture node from single to image sequence.

This seemed to work until I rendered, then it would lose the images again.

Image sequence is set up with the number of frames (number of images in the directory I was linking to), start frame of 1 with 0 offset. I also clicked the Auto Refresh on.

Here's my set up: 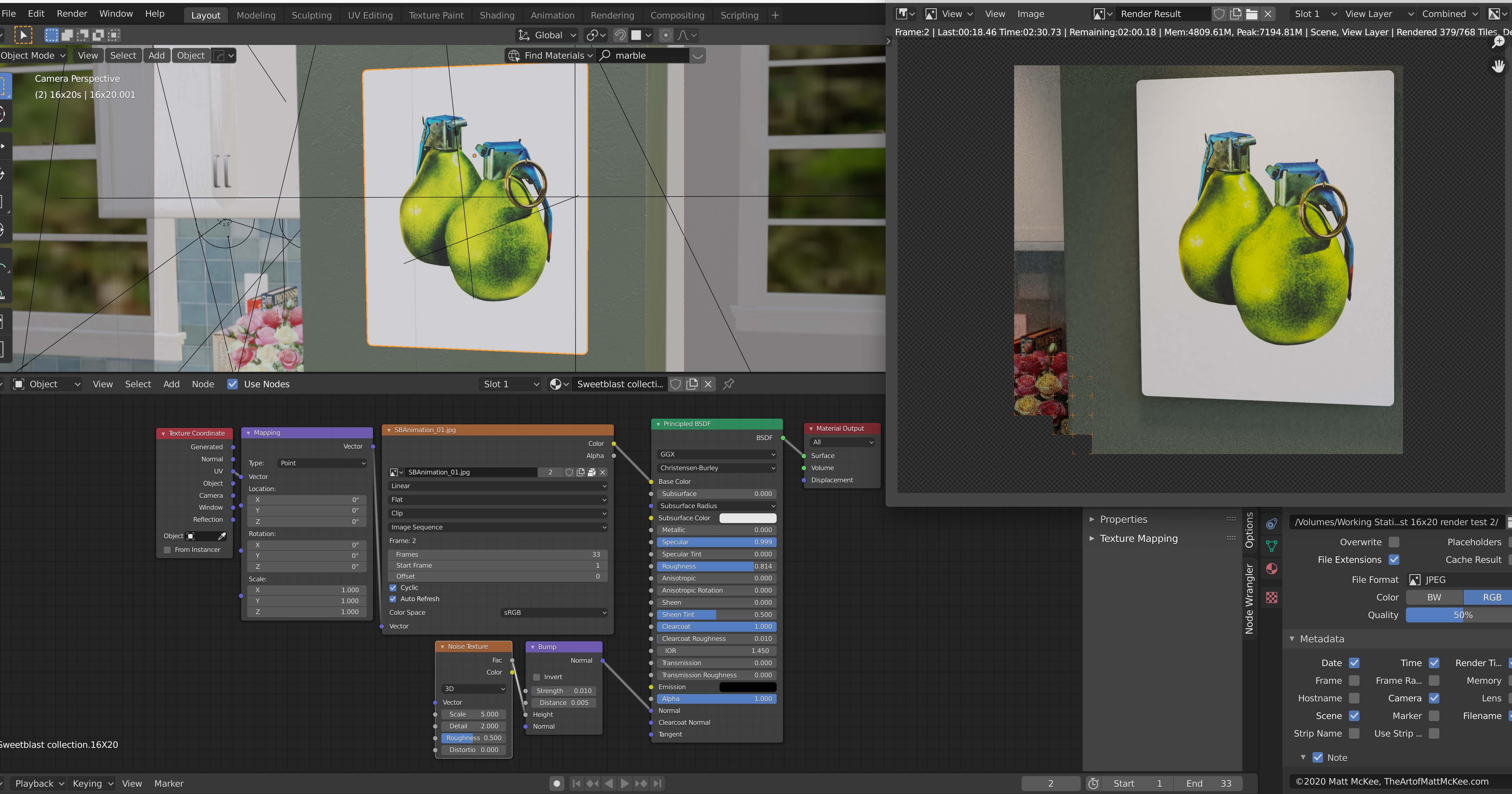 2
Can the blender game engine render diffuse material nodes?
1
How can I get a random number that is constant per object in a material
4
How does one use cycle's image sequence?
3
Are billboard particles with animated textures possible?
0
How to stack/layer two textures with alpha over each other with Material nodes?
0
How to keyframe changes to assigned materials in Cycles
4
Image sequence texture: no preview?
0
How to change a material texture per object?