How to make a simple plane slightly transparent?

I've got the following Octant Cube and would like to make the planes slightly transparent so that I can see what's behind them. 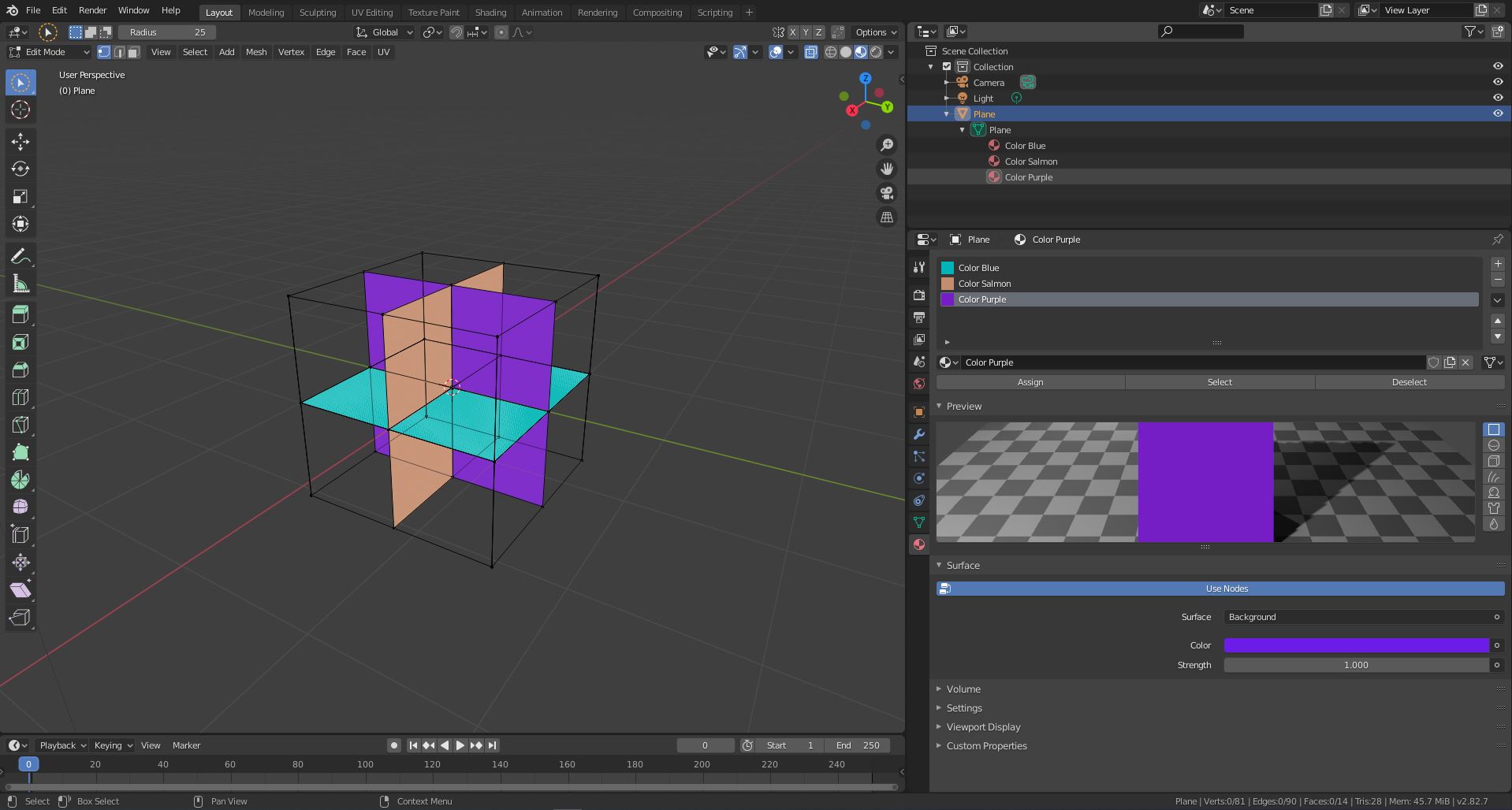 I've gone to Plane > Plane > Color Blue > material section of the Navigation Bar. There, as you can see in the previous image, there's a Surface: Background with a specific color.

Tried in a brute force way changing the Surface to different values other than background and shifting its properties to see if in at least one could get that slight transparency but no success yet.

How to make a simple plane slightly transparent to see the other planes behind?

As per Frederik Steinmetz's suggestion, I've created a new material called Transparent and assigned but can't see any difference. 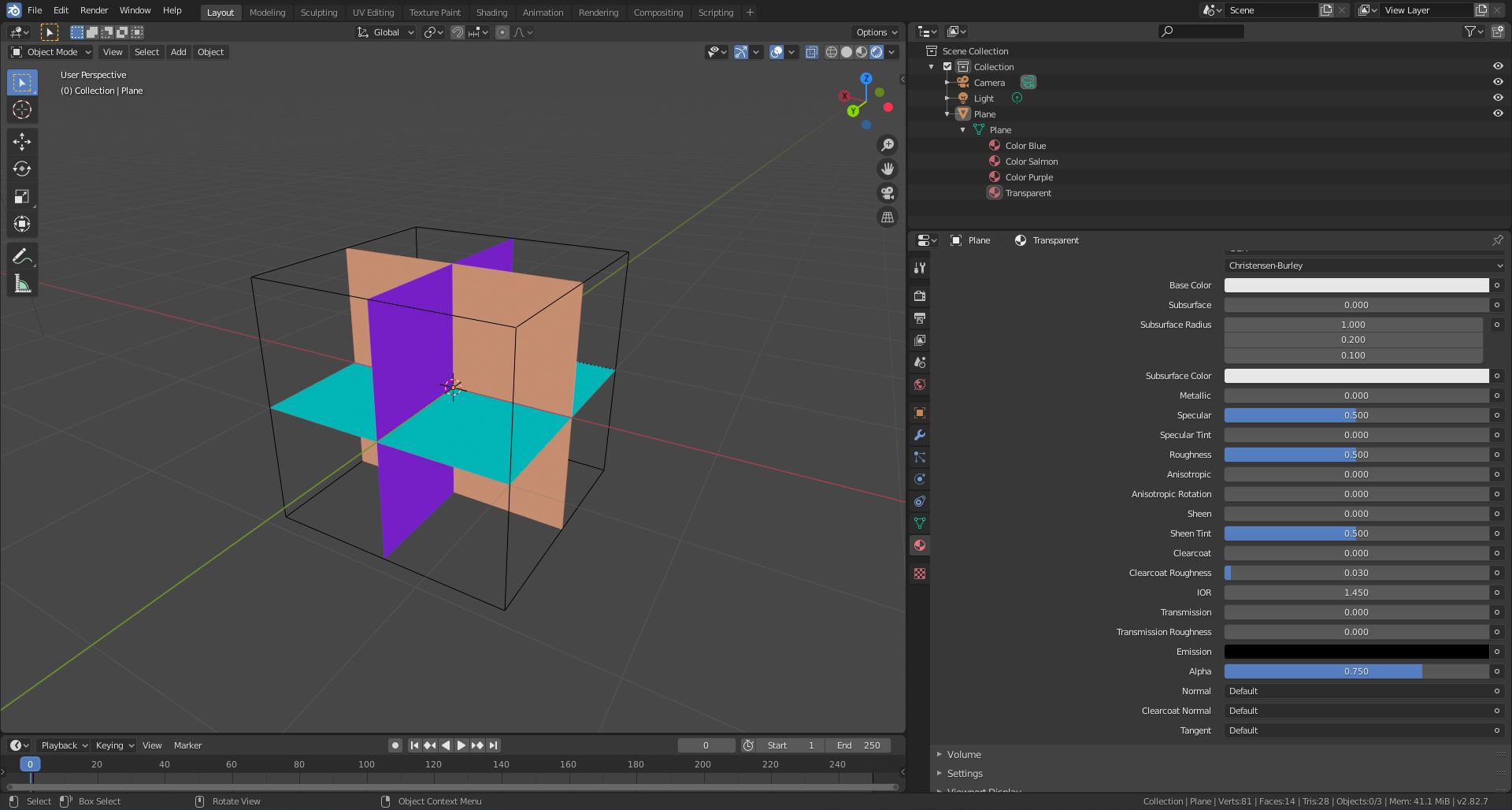 As per Emir's feedback, I've gone to View > Area > Select Vertical Split. On the new new Viewport, went to Editor Type and selected Shader editor. Inside the Shader Editor Press Shift + A then S and Type "Transparent BSDF". Shift + A Then S again and now type Mix Shader. ConnectED the Transparent Node to the mixer and also connected the Principled BSDF, making sure alpha has 0.750. Connected that Mix Shader Node to de output. 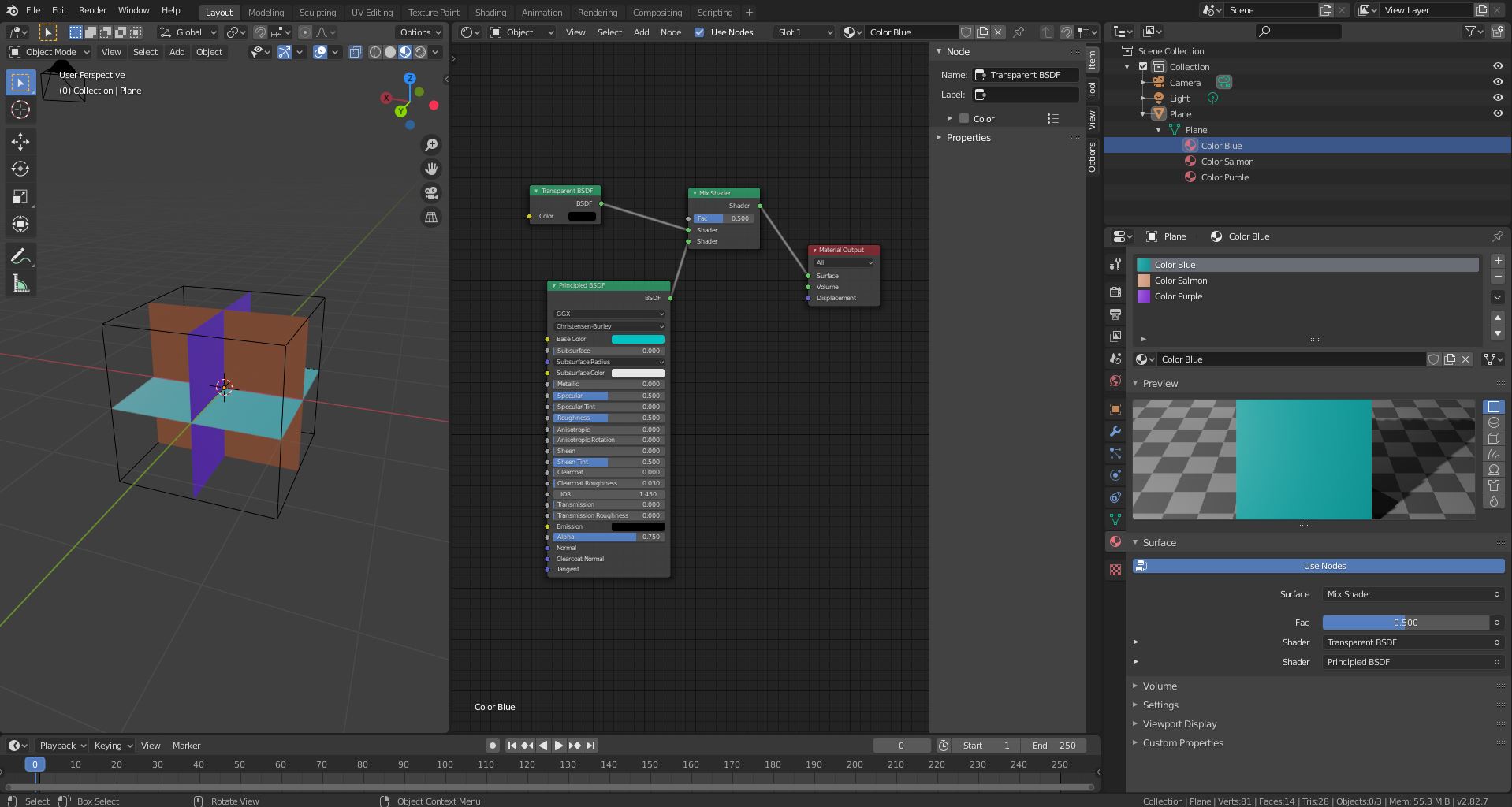 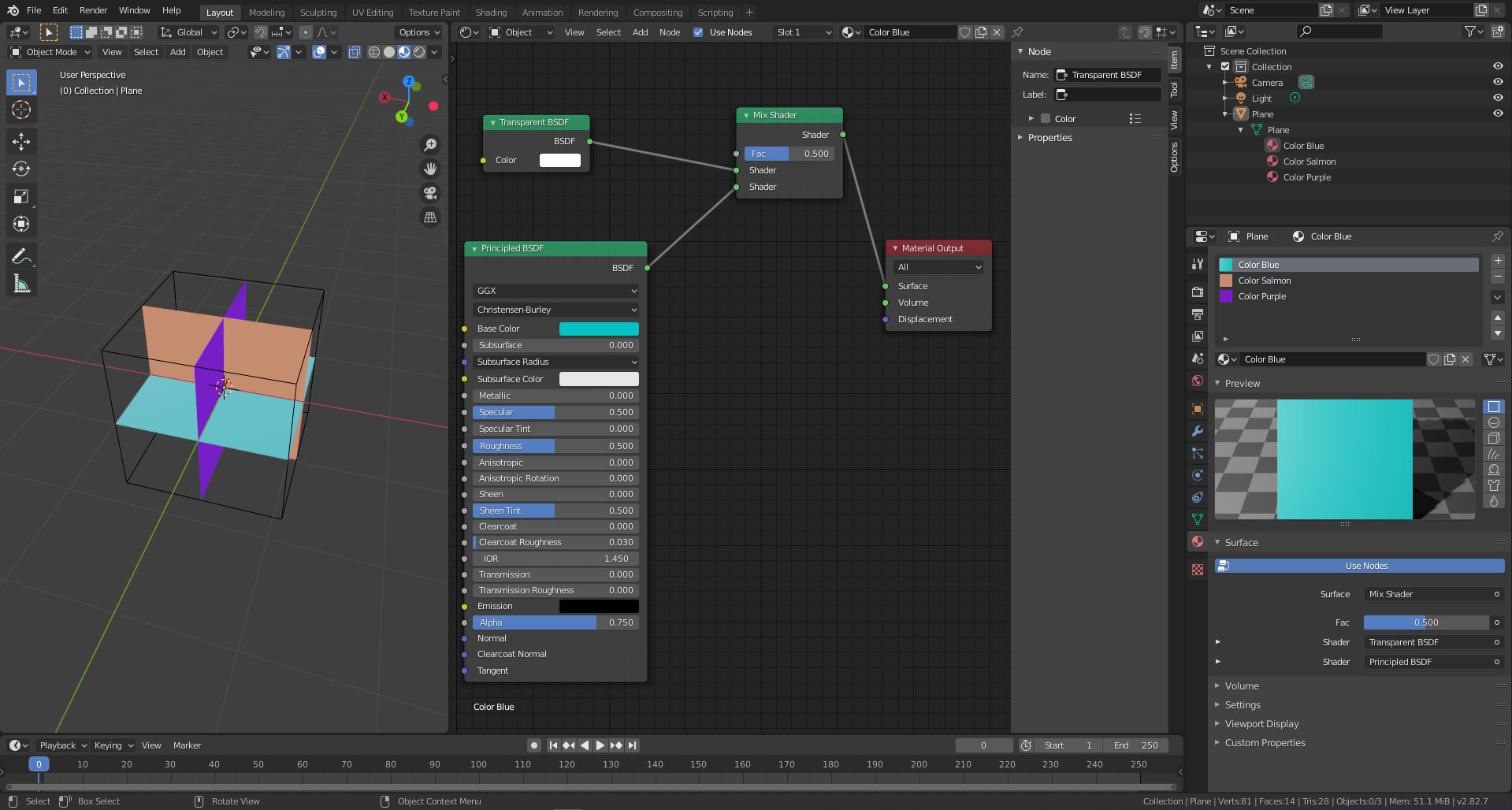 In order to see if the problem was due to me joining the planes before, created them again and follow the procedure mentioned by Emir but still no success in making it transparent. 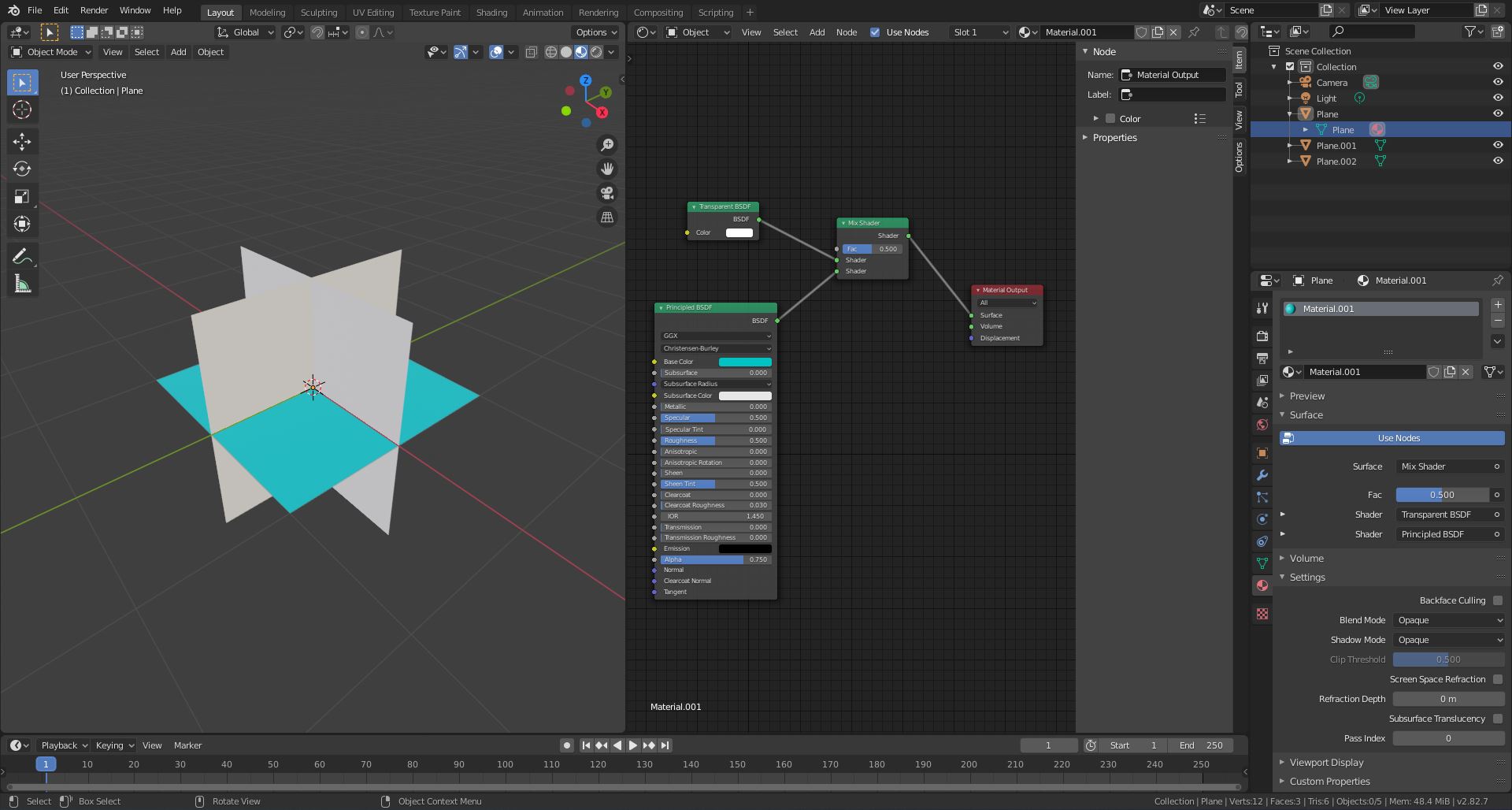 One option is to use Transparent Node

-On this new Viewport go to Editor Type and select Shader editor.

-Inside the Shader Editor Press Shift + A then S and Type "Transparent".

-Shift + A Then S again and now type Mix Shader.

-Connect your Transparent Node to this mixer and also connect the Principled BSDF.

If up to this point you don't get transparent plane, go to Material Properties > Settings > Blend Mode and change that property to Alpha Blend.

Just to be on the safe side: Create a new material, assign it to one of your planes. in the Shader editor you get: 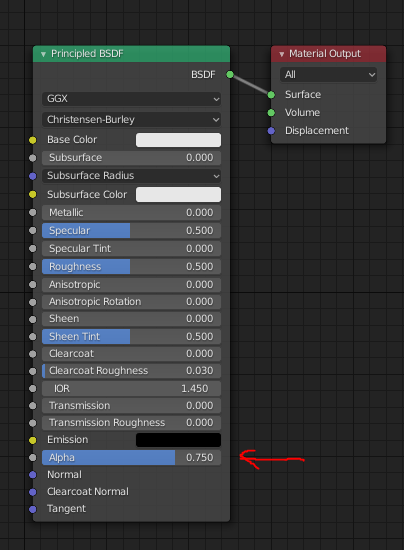 Adjust the alpha to your likings.
You should be able to see the same options in the material properties, when you clicked use nodes. You need to be in rendered view to preview any transparency effects. Make sure to check 'use nodes'.
[Big EDIT]
If you want to see the effect in preview: 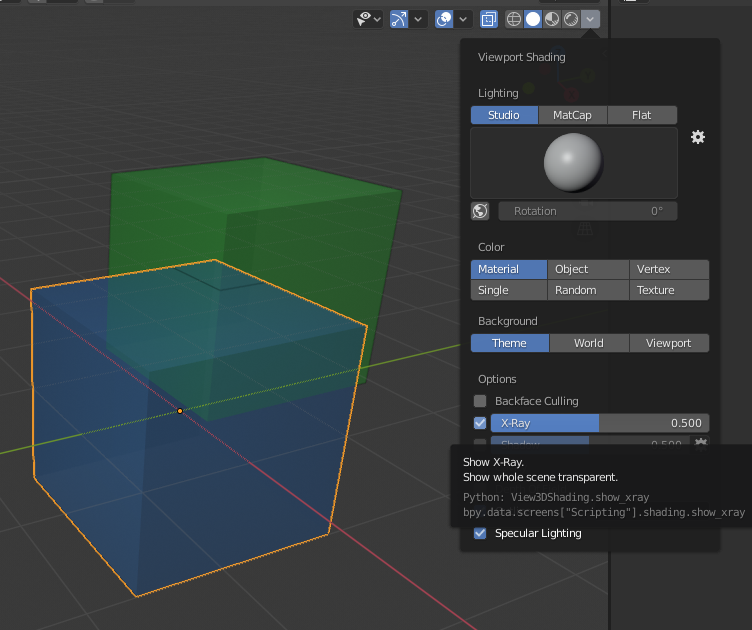 This way you can't set the transparency per object, just for all. You will soon be able to use these settings for individual objects in solid view: 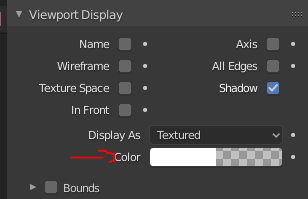 Not the answer you're looking for? Browse other questions tagged modeling transparency or ask your own question.