I am trying to make an animation of closing/opening of a Book. For this I'm using bones to control the same. I have added the bones as shown in the image, the closing of the covers are controlled by a controller bone on top. But I have an issue in completing the animation with the constraints.

Process followed to achieve it: (Note: Careful with the naming of the bones, check the image)

THE PROBLEM: As I added the constraints of limit rotation to covers, the Cover.L works well in its boundaries, but the Cover.R weirdly flips its direction the moment it nears the 180 degrees. SO I want to fix this issue 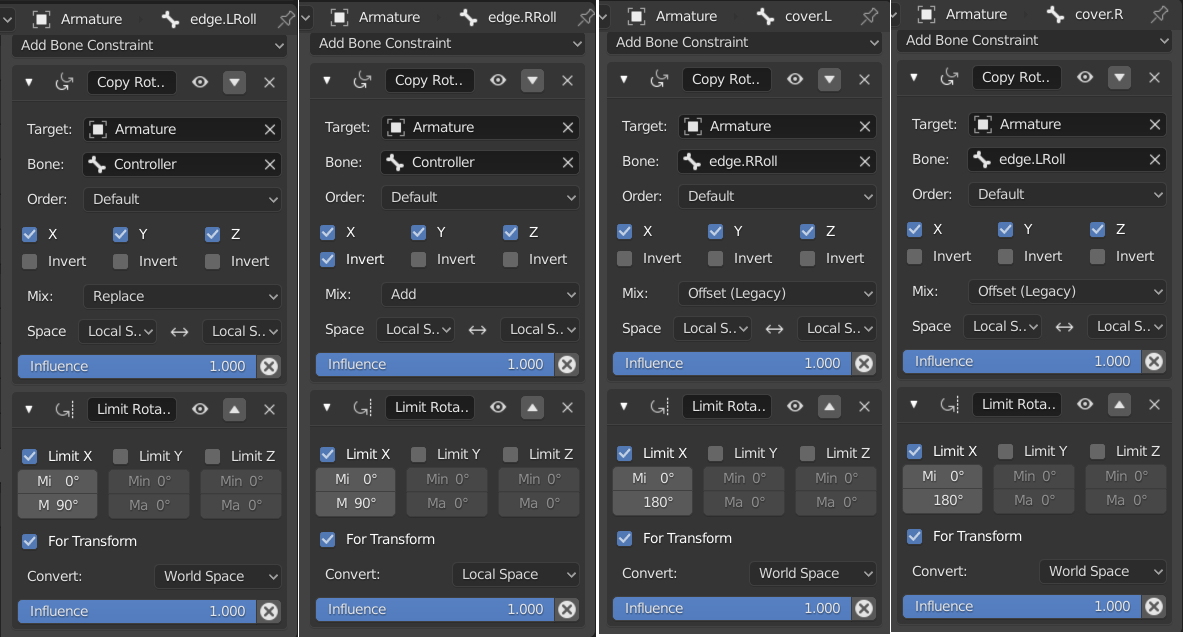 So, I am unable to understand what is wrong with this. Please guide me how to fix this issue?? Im I doing wrong somewhere? or is it a bug?

WHAT I HAVE TRIED - I have tried limiting the rotation with respect to the local space, changing the limit angles but this doesn't give proper limits. - I saw somewhere that the "roll" of the bones can sometimes cause rotation issues, so I even kept all the rolls to Z axis.

Btw: I am new to the working on Armature, that is the reason I might have been asking very basic issue. I have been following this tut https://www.youtube.com/watch?v=hjZa-h_f5Ts&t=6s

armature bones constraints
Share
Improve this question
asked May 30, 2020 at 7:48

After researching this issue, I get the impression that there is something problematic about how Blender calculates rotations internally which makes rotation constraints reset bone values to zero whenever exceeding +/-180 degrees. It turns out that Blender continues calculating rotations even within ranges for which constraints are currently limiting rotations, and that these internal rotation calculations can continue after passing the constraint thresholds. What I find particularly baffling is that unchecking the For Transform checkbox for a Limit Rotation constraint stops "out of bounds" rotation values from being reported in the Transform panel, yet this doesn't actually stop the calculations themselves, which will still go on to create flips when transforming past +/- 180 degrees. This leads me to wonder what changing this setting meaningfully, operationally achieves, because it doesn't do anything to change this insufferable behavior.

I noticed in the video that the author doesn't seem to have your issue. But then again, I don't think he ever rotated the control bone far enough at any point to tell me for sure that his rig wouldn't have done what yours is doing. So it's not clear that his rig would behave differently than yours if pushed past +/- 180 degrees.

Some elsewhere have suggested creating drivers to address this problem, which seems to me like a very labor intensive workaround for something that shouldn't even be a problem. I noticed that the author creates drivers toward the end of the video, and I don't see any drivers in your file. I don't know that adding these drivers would have solved your issue, as I only skimmed the video. But I found it of possible interest that you didn't have any drivers set up before reporting this issue.

I can't find any problems with the rig itself, but I could have missed something. I have found other links to similar questions which either go without answers or explicitly report that there is no solution.

I would really like to see a satisfactory solution presented, personally.

I solved this problem by making sure both Cover.R and Cover.L had Mix: Offset (Legacy) in the Copy Rotation constraint property. Then, I moved Limit Rotation to the top of the stack (above Copy Rotation) for both.