Light-emitting object on transparent background, rendered as .PNG has "low bitrate" artifact in video. What can I do? [EEVEE]

I'm making a horizontal frequency-visualizer in Blender Eevee (because it's fast and it has a nice bloom effect, which will be important later) using the Bizualizer add-on. Since I intend to put it on a video, I figured that a PNG with transparent background would be the easiest to do. Since I wasn't familiar with Eevee, I looked up how to make the world transparent in the render, while maintaining the bloom effect. I ended up using these nodes, and it worked (not my screenshot).

I rendered out some frames for testing, imported the pics into Premiere Pro, And what I noticed was that the "bloom-part" of them had this weird "choppiness" 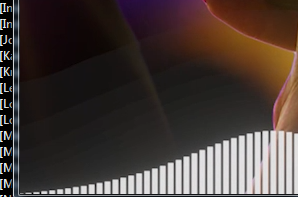 which I know happens when an image has a bit-depth of only 8 bits (or at least I think that's what it is). So I tried to render it out in 16 bits, but the result was roughly the same. Then I tried adding some dither in the mix, but it didn't really make it better.

Now, I guess I could just do the whole thing in Blender, I mean, I could put the visualizer on the video inside Blender, but it would be easier for me to just render it out as images and then do the rest in Premiere. And also, I'm simply curious what could cause this issue.

Thanks, Susu, it worked! I rendered out a couple of frames in OpenEXR, imported it into Premiere, and after messing around a little bit with the blend modes, I found that the one called "Lighten" seems to be working perfectly, the bending is gone. Thank you!

Not the answer you're looking for? Browse other questions tagged eevee-render-engine video or ask your own question.

2
What are the best settings for a video export to Adobe Premiere (CS6)?
1
Only one object has bloom when Z combining
0
How to render transparent background for png image texture with eevee?
12
Blender Eevee how to render Bloom effect when using transparent background
1
In blender 2.9 how do I get freestyle to ignore transparent materials on a vroid character
0
Flashes of light escaping through solid objects in rendered animation
0
Eevee: Background-texture is reflected, but light-emitting text-object is not - how to fix?