In opening an older model in 2.81, a couple of the bones show a red curve in pose mode: 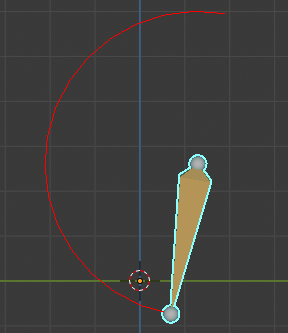 As you can see, it happens to conform with the positioning of this bone's tip when rotating 180 degrees to the left and upward, in the axis perpendicular to this view.

The bone previously had an IK on it; the red line remains even after removing such. Other than that, comparing all properties between it and other bones, I see no other explainable differences.

Curiosity has me. What property displays this indication curve in pose mode?

It's probably because when you assigned it an IK, you also gave it a rotation limit, you'll find it in the Properties panel > Bone > Inverse Kinematics. As you can see if the Limit X rotation box is still activated, it is just greyed because the bone doesn't have any IK constraint anymore, and the red line still appears on the 3D view. 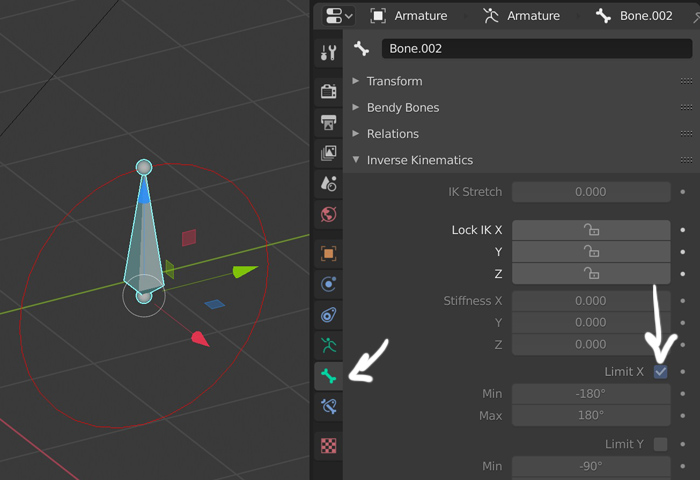 Not the answer you're looking for? Browse other questions tagged pose-mode or ask your own question.

1
Use Pose Mode or Object Mode to move whole model
1
Pose mode isn't working
0
Make character and plane interact in pose mode?
0
Inverted axis in pose mode
0
Why does parenting Heel IK to Thigh Bone cause jittering in right leg but not left leg?
2
How do I enter Pose Mode in Blender 2.81?
0
Lags in pose mode
0
Skinify Rig Options Not Visible in Pose Mode Blender 2.8