Understanding what “dependency cycle” means, why it happens, and if it is a cause of concern [MWE provided with cloth]

I am using Blender 2.82a. My code seems to be working but creates "Dependency Cycle" messages from the command line, so I hope to understand why they are happening and if they are a cause of concern.

My particular use case is dropping a ball into a bag, where both the ball and bag (implemented as a half-sphere) have the cloth and collision modifiers, based on one of my answers here, but the use case is less important to me than understanding what causes dependency cycles. Here's what Blender looks like after running my Minimal Working Example: 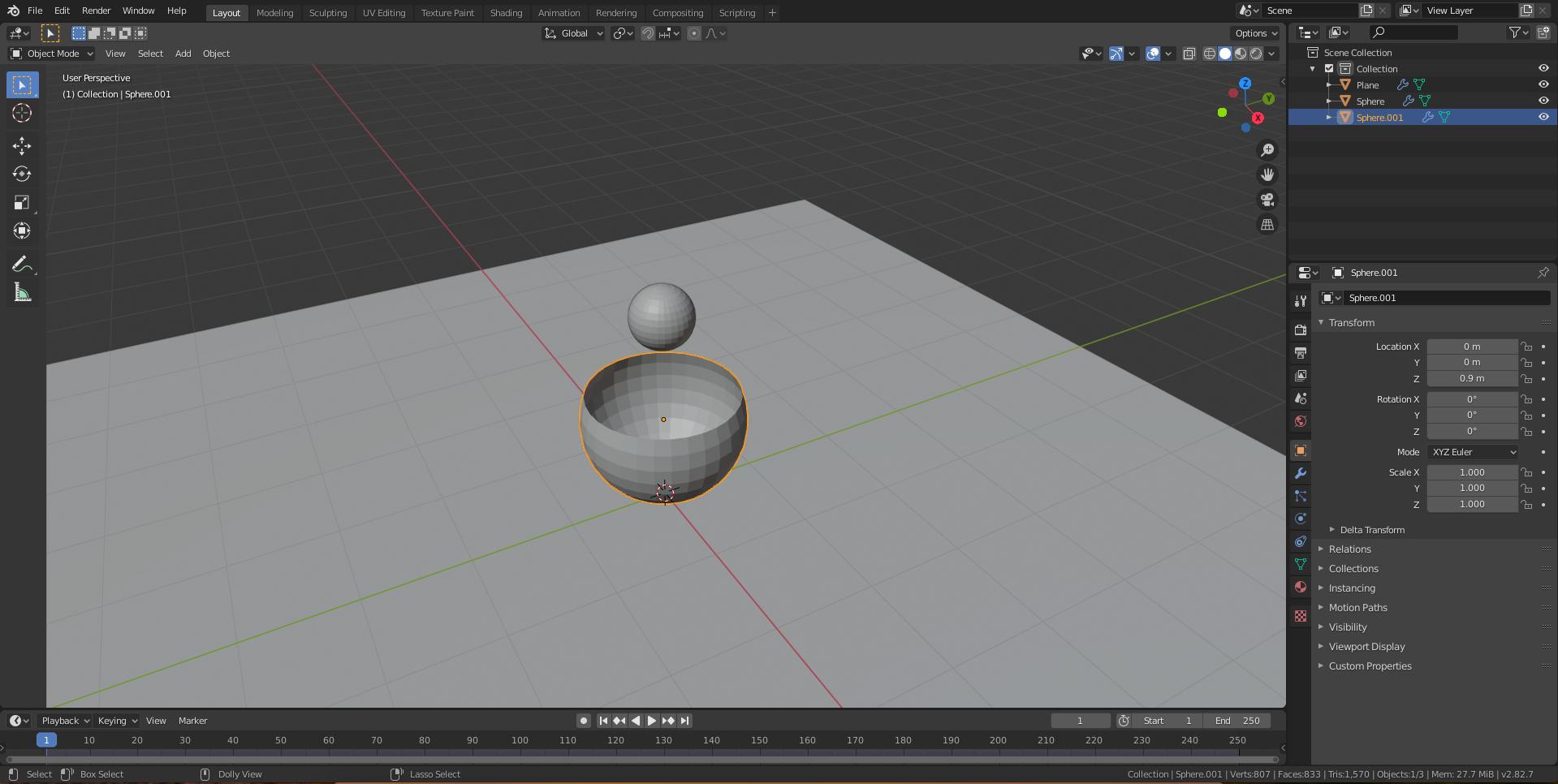 Here is the Minimal Working Example script I am running:

I am curious why these messages appear and if they are harmful. I'm having difficulty figuring this out based on various references. These are what Google shows me when I search for dependency cycles in Blender:

Thanks for any feedback you may provide.

In practice, having a dependency cycle means that Blender's internal evaluation order will matter and values may take a couple frames to converge on a valid solution, or diverge altogether.

Usually it will eventually converge on a valid solution, like A=2,B=1, but some cases will diverge altogether.

Animated values will generally always lag behind by a couple of frames, because the values can only be evaluated using their results on the last frame.

For physics sims, I tentatively assume dependency cycles will be smoothed out by the solver iterations unless I can see a visible problem.

Having a dependency cycle means that somewhere in the Blender file is a circular sequence of values that all require each other to be calculated first, with no end, so there is a "Catch-22" in that there is no valid starting point for figuring out any of the values in the cycle.

A normal (non-circular) scene may go something like this:

Once you step through and calculate all the steps of a non-cyclical dependency graph, all values will match their definitions.

But what happens if you have cyclical dependencies?

In this example, because the two objects circularly depend on each other, there is no valid way to calculate the values in question and be sure they match how they're defined. You need to know Object2.location in order to figure out Object1.location, but you need to already know Object1.location in order to figure out Object2.location, so you're screwed, basically.

Under conditions like this, Blender will still try to figure out the required values by plugging in the last known values for their dependencies (usually from the previous frame). But it cannot guarantee that the results will be consistent with how the values are defined. In fact, in some cases like the above example, there may not be a consistent solution (or at least not one that can be found through naïve iteration).

You don't actually need to set up a physics sim for a MWE of a scene with a dependency cycle. IMO, the easiest way to create a dependency cycle is to just have two objects with constraints (or modifiers) that point towards each other. In this case, the transformation of the first object depends on the second object, but the second object depends on the first, so there is no valid starting point for calculating the scene. (Depending on the type of constraint, you may even be able to see the latency introduced by Blender's using values from the previous frame when you move one of the objects around.)

Or for an example that's easier to play with and dissect, you could also set up two drivers that both use the evaluated values from each other.

Will Chen's answer has some detailed info that I'm not going to repeat (on why a dependency cycle happens, what it means), but I think there are some remaining questions you have that I'll do my best to answer.

I'm also going to call dependency cycles "loops", because that's what they are: loops in controls. And because I think it makes it easier to think about them when using a plainer name, something less technical-sounding.

While it is possible to have loops-- Blender won't just error out on you-- it is almost never wise. It will make it irritating to animate anything. And you will probably end up with render/preview disagreement, which is maybe the worst thing in the world for a rendering engine where each frame could take hours to render.

However, that's talking about the general case of these dependency cycles, which are a lot more likely to come about via rigging or something. You've got a very specific kind of loop: a physics-collision loop. This is basically unavoidable when combining collision and physics (presumably, collision to affect other physical objects, which makes that loop clear: clothA depends on clothB which depends on clothA.)

Physics-collision loops have historically been okay, and have been used by a lot of Blender users to create interactions between physical objects. Physics create render/preview disagreement all on their own, until you bake physics-- at which point the loops disappear anyways. And if you're running physics, you're very specifically not hand animating stuff, so there's no difficulty in controlling the animation. They may even act at a higher frame rate (the physics subframe), thus "evening out" their dependency problems. I'm not sure; I haven't delved into the code or anything, and questions I've asked on devtalk regarding this particular problem have gone unanswered.

Not the answer you're looking for? Browse other questions tagged scripting rigging armature cloth-simulation collision or ask your own question.

18
What is the technical difference between softbody and cloth simulation?
6
Script for Placing Mesh on Sphere with Provided Latitude and Longitude
3
Create a sail with cloth and curves acting as softbodies
0
Issue with Cloth and Hook Connection for Animation
2
Whenever I run my cloth simulation, the cloth collides with the 'static' pose of my character, and not the animated poses of that character