I've got a highly-detailed mesh of curtains, similar to what you'd find on a stage. The mesh currently has eight objects/materials (1 material per object), but in reality it only needs two - the large middle curtain and the gathered curtains on each side. The two side curtains use the same texture, and the four objects comprising the middle curtain all use the same texture.

Is there a way to combine multiple objects into a single one?

Also, is there a way to reduce the overall number of vertices and/or faces? The entire mesh currently has around 700k faces, and so far decimate can only get it down to around 350k before the mesh starts deforming.

BTW: Losing UVs isn't a big deal for me. Since we're only talking eight materials here, I can easily remap everything if I have to. My primary concern is that the exported mesh is as simple/optimized as possible while still looking good.

EDIT: If it will help, here's a link to the 3DS file I started with: Curtain Mesh

LINK: Here's a link to my blend file.

I noticed that your file was made in 2.49. This is a very old version of blender, and I very highly recommend that you update to a new version if possible.

Using some rather aggressive decimate modifiers, I got it down to 75k while still looking fairly reasonable: 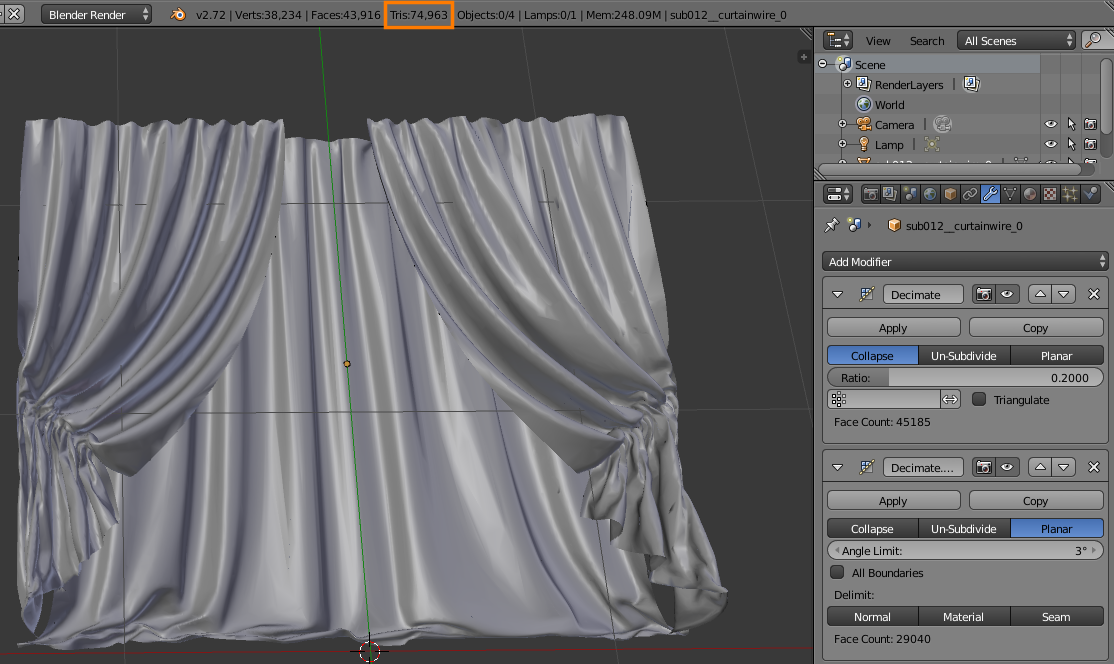 There are a few dark spots where there seems to be some weirdly positioned vertices messing with the normals, but these should be pretty easy to fix with a touch of the smooth brush or the simplify brush.

Here is the resulting .blend. I've applied the modifiers, so it should open in 2.49 just fine.

54
Why is it important to apply transformation to an objects data?
33
Why are the longer edges being beveled more?
30
Is it possible to automatically simplify geometry in blender without losing object shape?
13
Is it advisable to update Blender to the newest version as soon as possible each time?
9
Reducing vertex density as distance from point increases
15
How do I decimate part of a mesh?
0
How to lower the polygon number but keep smoothness?

3
How to join booleaned objects without leaving seams?
3
How can I merge these two spherical objects into a single smooth mesh?
0
merging two objects for sculpting
1
Objects exported from Blender contain extraneous wing-like flat faces that don't display in Blender layout and modeling views
1
How to fix warped faces when using boolean modifier on curved objects?