Updated: The main goal of the wind simulation is to test the cloth simulation of the cape. I have done both a cloth simulation, which yielded no results when baked with the wind, and a soft body simulation, which pushed the non-pinned cape away from the model but did not have the cape react as a cloth, just as a stiff object that translated across the view port. I feel like I am missing something more fundamental to this process, but I'm not sure what it is.

The entire object, was in triangles which also were separated. A cloth simulation with this would never work to start with, neither would a soft-body simulation. Both are based on a interconnected structure/mesh.

Learning something new along the way, this is what i got, i hope it's somewhat close to your goal.

Now regarding what is needed to get there, or at least to a cape that simulates like cloth: 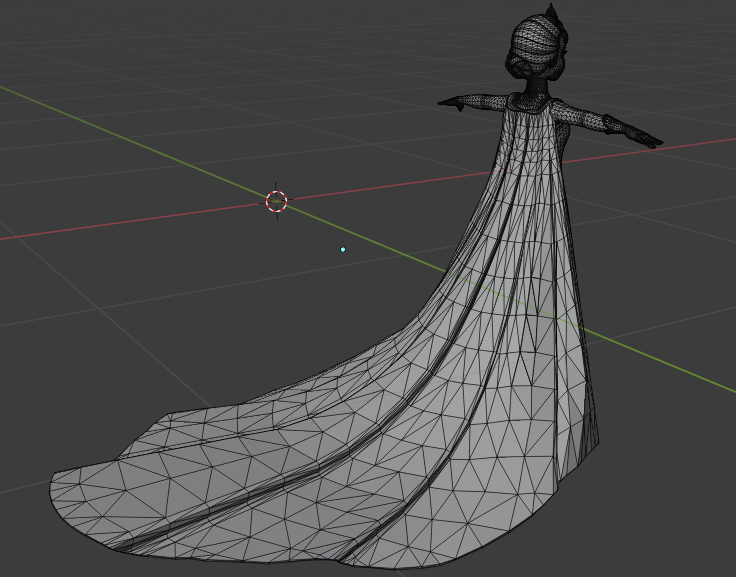 The final result can be dissected here Princess_with_cape (I didn't use Blend-exchange as original owner did not use it either, should i get the ok, i'll change to Blend-Exchange)

The cleanup steps i'm gonna add some more info later, hope in the meantime you can work with this.

Not the answer you're looking for? Browse other questions tagged mesh physics cloth-simulation vertex-groups or ask your own question.

3
Mesh with cloth simulation and particle instance modifiers (used in a particle system) not responding to wind
2
Exporting cloth simulation to Collada results in static cloth instead of a waving one
7
Cloth collision with an object
2
Cloth Simulation Not Rendering Correctly Over Network
1
Items on top of cloth, and dragging the cloth to move those items [blend files attached]