Why are there so many denoising passes?

I just wanted to ask how should I use the other denoising passes (except for the normal and albedo ones):variance, shadowing, denoising depth and intensity, because nobody talks about them and I don't know how they could be used. 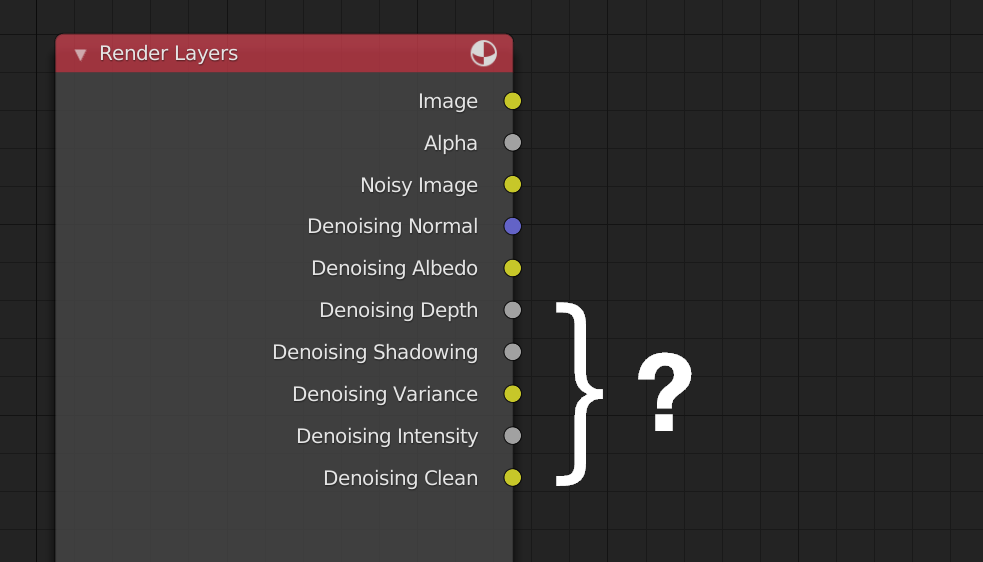 compositor denoise
Share
Improve this question
edited May 6 '20 at 12:53

I have a feeling that these passes are used for testing/troubleshooting purposes.

Let's take the Denoising Intensity pass for example. If plugged into a viewer node, you will see a black and white image. An entirely black pixel means that denoising has been applied at maximum strength, and completely white would mean that the denoiser did not touch that area.

I think this would be very useful in figuring out how to fix faulty compositor setups. If there are some strange artifacts, the Denoising Intensity value can be used to let the viewer see if the denoiser is causing the problem, as smart tech like this can be unpredictable. You can even use it to your advantage to smartly blur out the artifacts.

Additionally, because denoising intensities as automatically generated to optimally denoise the scene, the user can also use it to see which parts of the scene are more noise-prone.

This is just my speculated idea of the usage of one denoising pass. I have a strong feeling that the other ones will be of assistance in a similar way. In most cases, however, they would be useless.

14
What are the denoising passes useful for in 2.79 experimental feature set?

5
Creating depth of field from Beauty+Depth passes (rendered in another software)
2
Preserving depth when rendering in multipe layers (Cycles)
1
How to make the compositing to use the Z Channel in Blender?
14
What are the denoising passes useful for in 2.79 experimental feature set?
17
How to get a smooth curvature map from a normal map?
2
Denoising options in latest 2.91 nightly builds