How to install import_3dm add-on properly?

I'm totally new to blender - mostly work in Rhino, but am wanting to use it to render models that I build in rhino so am trying to install the "import 3dm" addon.

I had blender 2.80 installed. Tried installing the addon from the .zip file on my desktop (import_3dm-master) it shows a message in blue in the bottom right of the screen stating that it has installed that addon but it doesn't show in the addon menu under any of the categories.

I tried extracting the file and copying it directly into the addon folder. Still nothing. Tried installing the import_3dm-v0.0.2 version. This shows up in the menu but has an error (shown in screenshot below). I even installed blender 2.82a in the hopes that this would somehow solve the problem but no luck... Here is the error message I get: 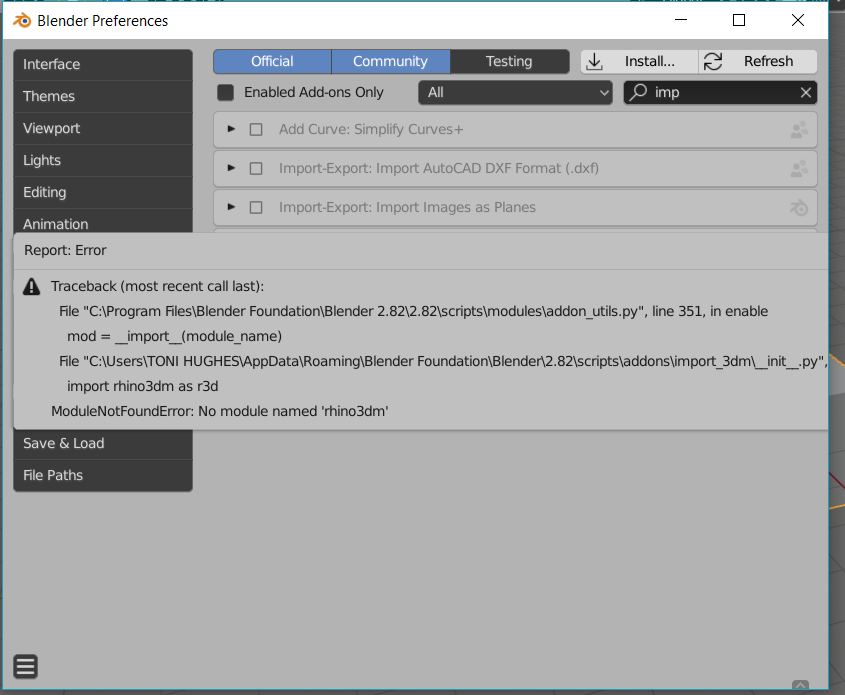 Q: How to install this add-on properly?

The 3dm importer depends on the rhino3dm package that has to be installed as well. In order to get the add-on working:

The first step can be accomplished by running the following script. Open Blender, switch to the Scripting workspace, copy and paste the script into the text editor and execute it. Make sure to check the output on the console for any error messages (Window > Toggle System Console). If everything works properly it should print the version of the installed package.

In case your Blender installation is located in C:\Program Files\ you will have to start Blender as administrator. Otherwise, it doesn't have the permission to install the package.

Next download and install the most recent release of add-on. With the required dependency installed it should activate without any issues.

Important: In case you intend to use the code above in an add-on, it's common courtesy to not connect to the internet or install packages without the explicit consent of the user.

Not the answer you're looking for? Browse other questions tagged add-on installation external-applications or ask your own question.

0
problem importing .obj file from rhino, only dots no surface

2
Install blender on Windows XP
0
how to install bprojection addon
2
Trying to install Animation Nodes - How to make Blender forget?
0
Add on - rhino import not working
1
How to install the add-on to import Rhino .3dm files