Items on top of cloth, and dragging the cloth to move those items [blend files attached]

Using Blender 2.82a, I'm simulating items on top of cloth (which itself is on top of a larger plane) and then using the cloth to drag the items. I have a method that works reasonably well, but I'm wondering if anyone has advice on improving it or extending it to rigid objects. Here's the setup at a high level:

Right now, the main hyperparameter that I have tuned which shows successful results is the Collision -> Softbody And Cloth -> Friction value: 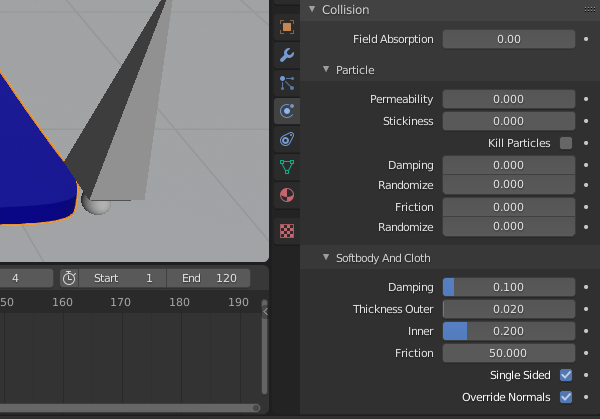 This is for the cloth, not the cubes.

This setup seems to be working reasonably well. Now, I am wondering if it's possible to have rigid objects on the cloth. (The cubes have the cloth modifier.) If I make the following changes:

Ah, but unfortunately now that the middle block is rigid, it no longer interacts with the cloth. This is definitely hard to simulate with physics. Does Blender have a solution for this? Here is the .blend for the above gif.

So, to summarize: (a) rigid objects on top of fabric, and (b) which hyperparameters to further tune? Thanks everyone.

Much like rigid body physics, the cloth modifier in vers,2.77a at least, won't allow the cloth to be animated or shapekeyed whilst the physics cache is active.

The cache's frame range can be set however (physics properties) so we turn that off at frame 140 when the cloth has settled down.

Whilst the cloth physics is still active, two 'cloth shapers' are underneath the table that physically 'lift' the cloth ends. The cylinder moves to the right between frames 91 & 98, the other end's triangular cube, from frame 98 to 105.

Both lifters are given Collision Physics. They don't interfere with other collision objects such as the table and are invisible when rendered. (eye & camera icons in the Outliner)

In order to animate the cloth, we'd need to "Apply" the cloth modifier at frame 140 when it's settled down and therefore 'freeze' it in it's current shape, allowing keyframed animation.

In this example we don't need to animate the cloth at all. Instead we duplicate the table and get rid of the copy's inherited physics so it's just scenery.

The original table is made invisible in the Outliner and remains stationary to support the cloth.

As the falling cubes physics are baked we can add keyframes to simulate their inertia. All three are parented to an empty so they can be moved as one.

Should there be other objects and scenery behind, simply render the tables, cloth etc. out with a transparent background and render that as one clip. Render the background objects as another and mix them in the VSE.

6
How Can I Deform a Cloth During Simulation?
4
Pin cloth vertices at a specific set of frames, and un-pin otherwise (in python)
4
How to make particles stick to mesh when Molecular Script is enabled?

7
How Does Cloth Friction Work?
0
Attempting to link a plane with cloth sim to an object with rigid body
10
Pointy meshes pierce cloth sim. How can I get around this while also keeping the physical qualities of my cloth (e.g. mass, stiffness, etc.)?
1
Why does this cloth go down past the top surface of the cube?
0
Cloth physics not updating the passive rigid body component
1
Cloth Simulation intersects with collision object