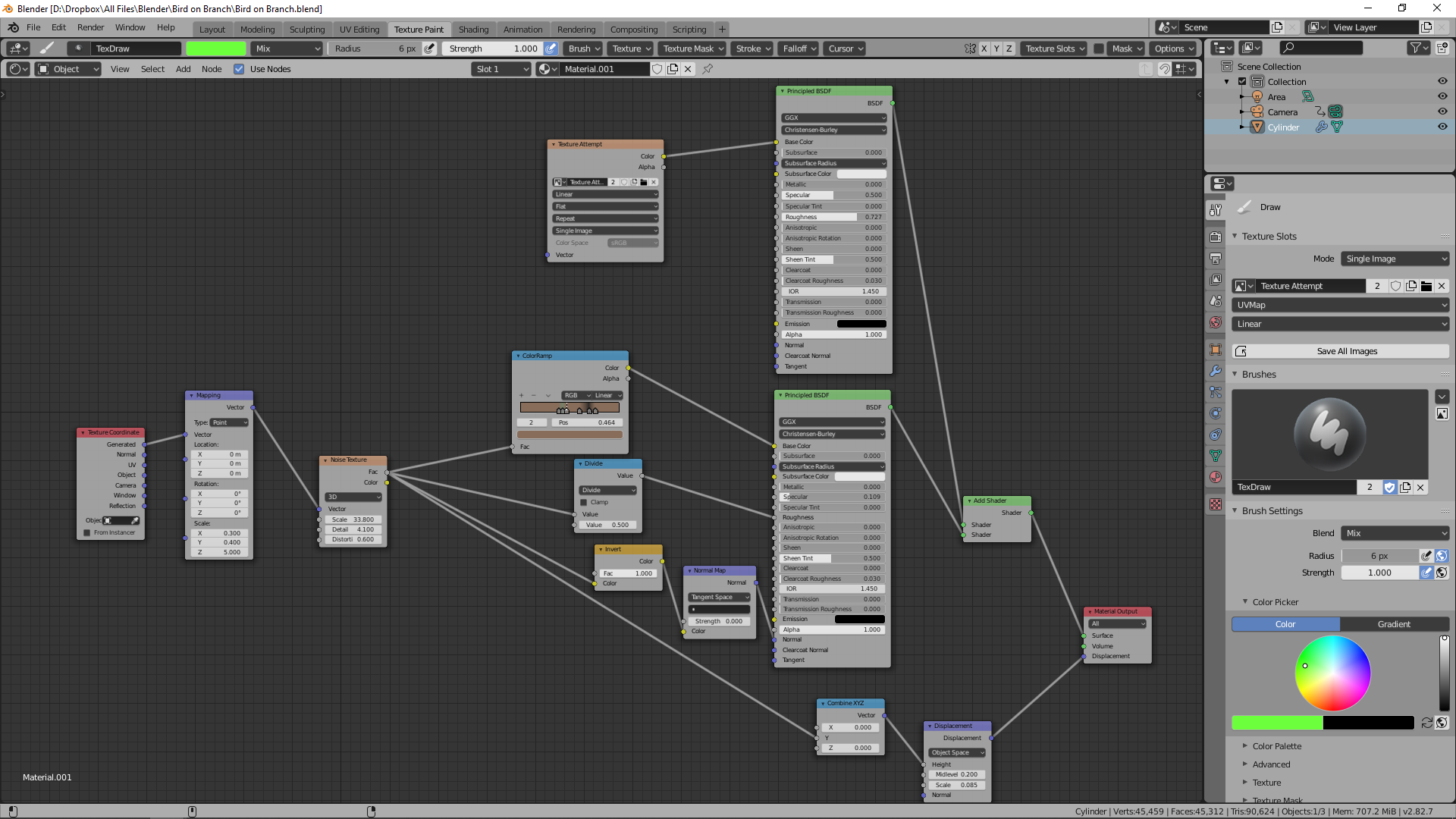 For some reason, I cannot figure out how to paint on my texture layer, neither in the 3D Viewport nor the Image Editor. I have a paintbrush and a texture layer, have it UV unwrapped, have it in the Texture Slots as the texture image ("Texture Attempt").... But it won't let me paint. 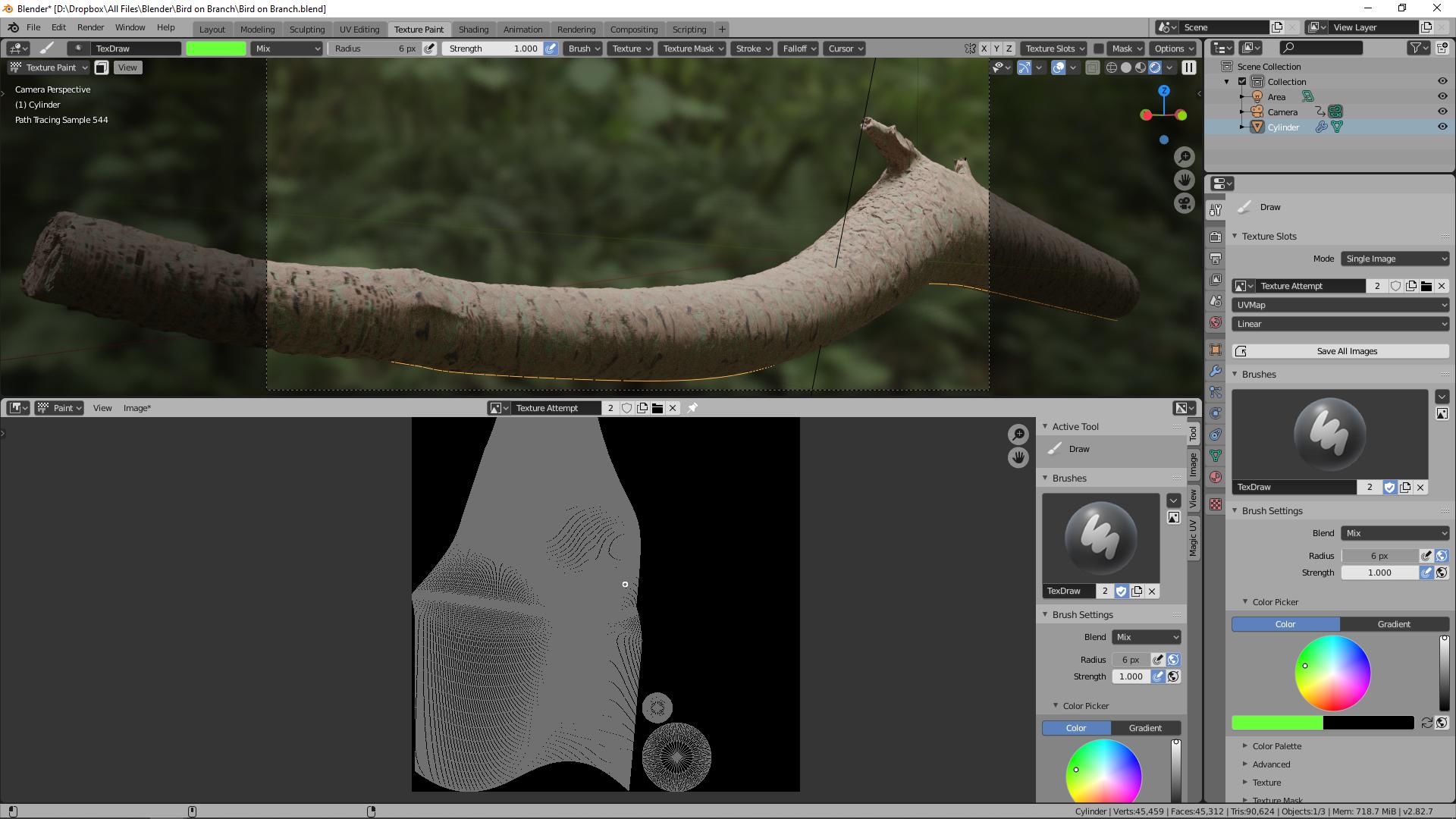 I made a test Blend file where I reproduced a simpler version of what I'm making - a plane with a noise texture and an image texture going into an add shader, and I can paint on the image texture. At some point, I had to start switching from Rendered view to Lookdev and back to get the paint stroke to update, but at least I can paint! If anyone could also speak to that issue, that would also be nice! 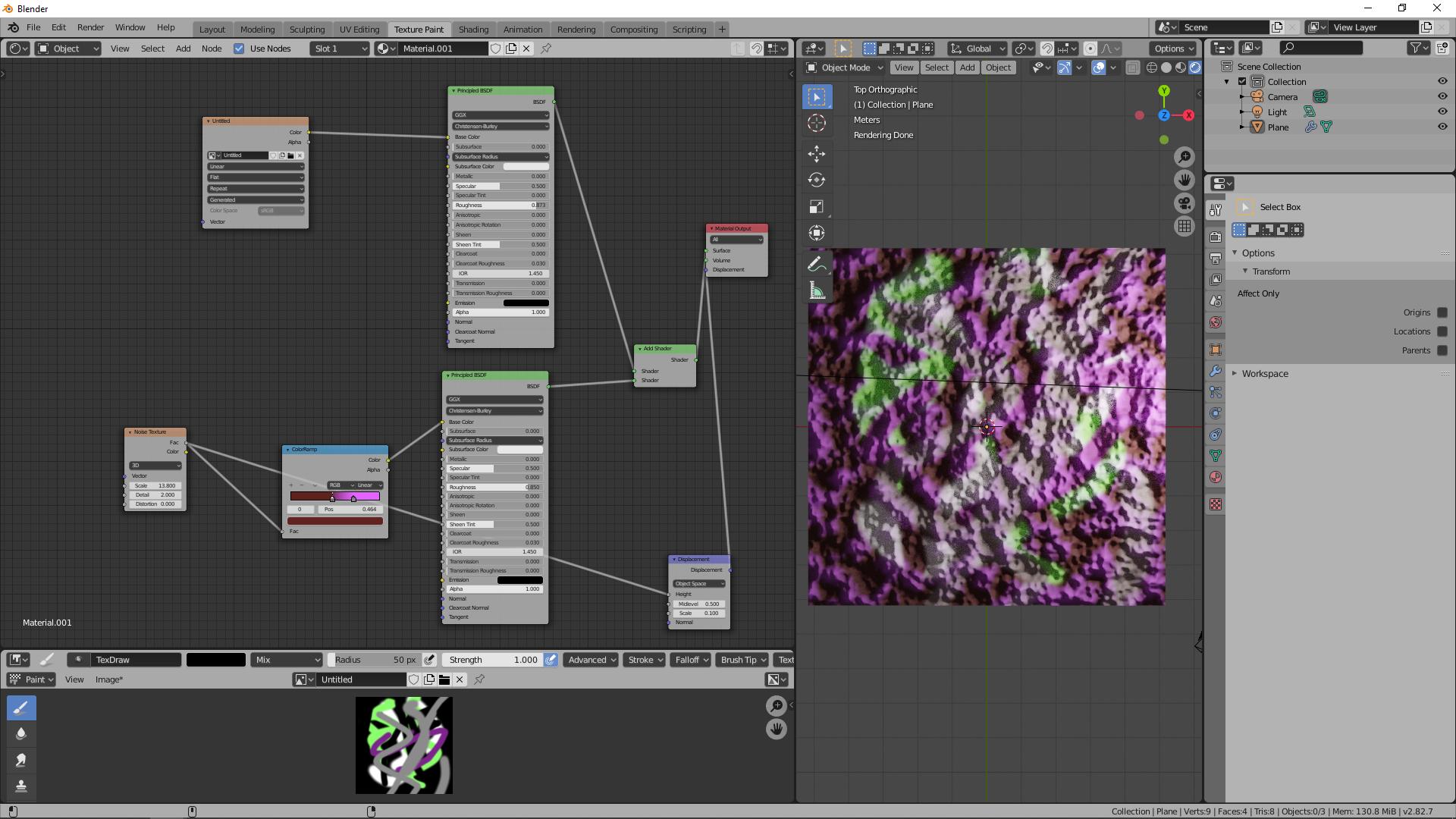 I've watched a ton of tutorials, read a ton of threads, googled a bunch of stuff - I can't find the broken part of my file.

Can you find what's wrong?

I think that after looking at this, you can simplify your approach to a Color Mix node in front of the Principled Shader node to combine the texture paint and noise texture in ways you can't here with your set up. In the Color Mix node, you can actually choose from a drop down of multiple mix modes similar to a Photoshop layer blending mode like Add, Subtract, Mix(Normal), Multiply, etc. 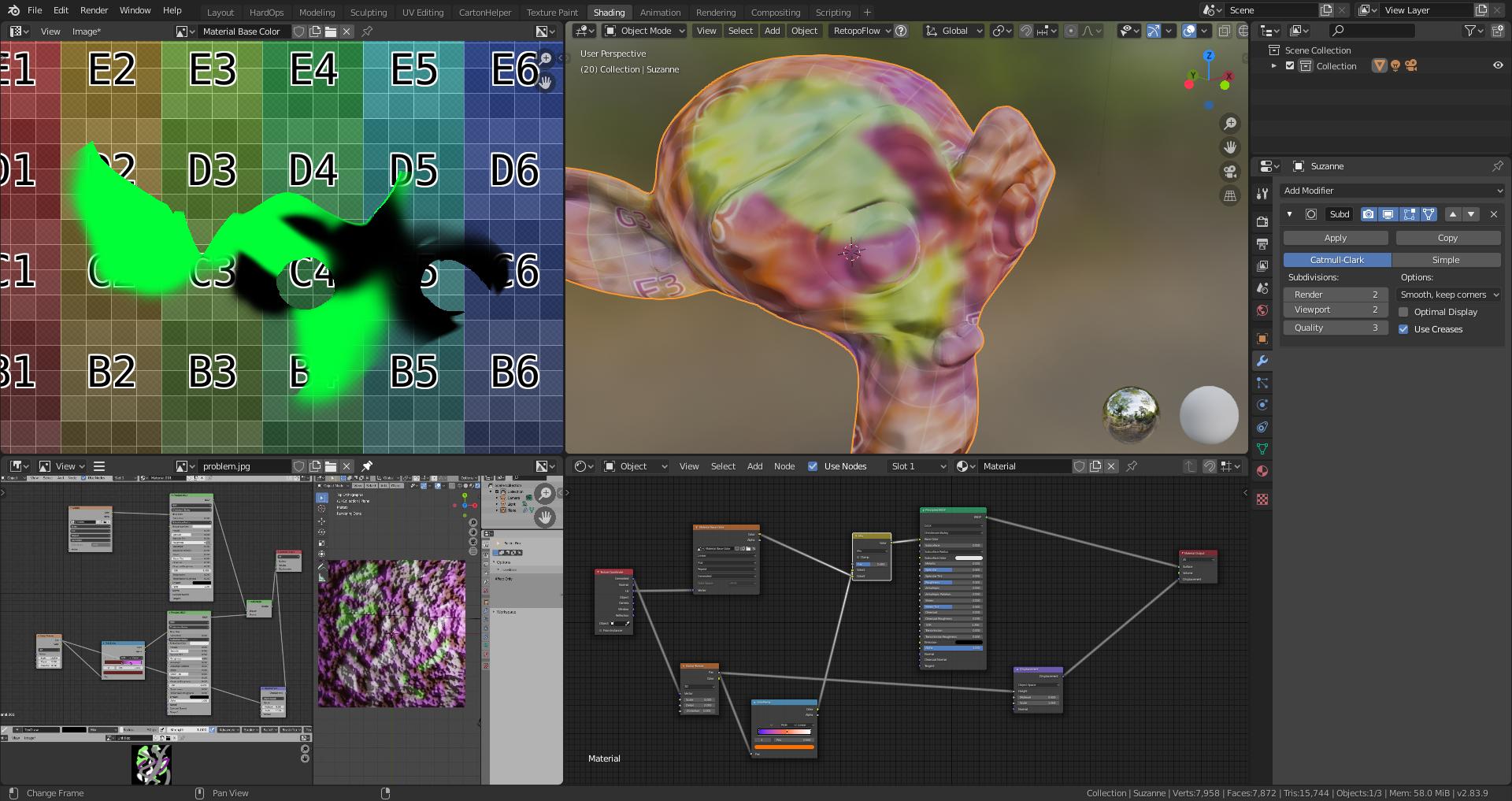 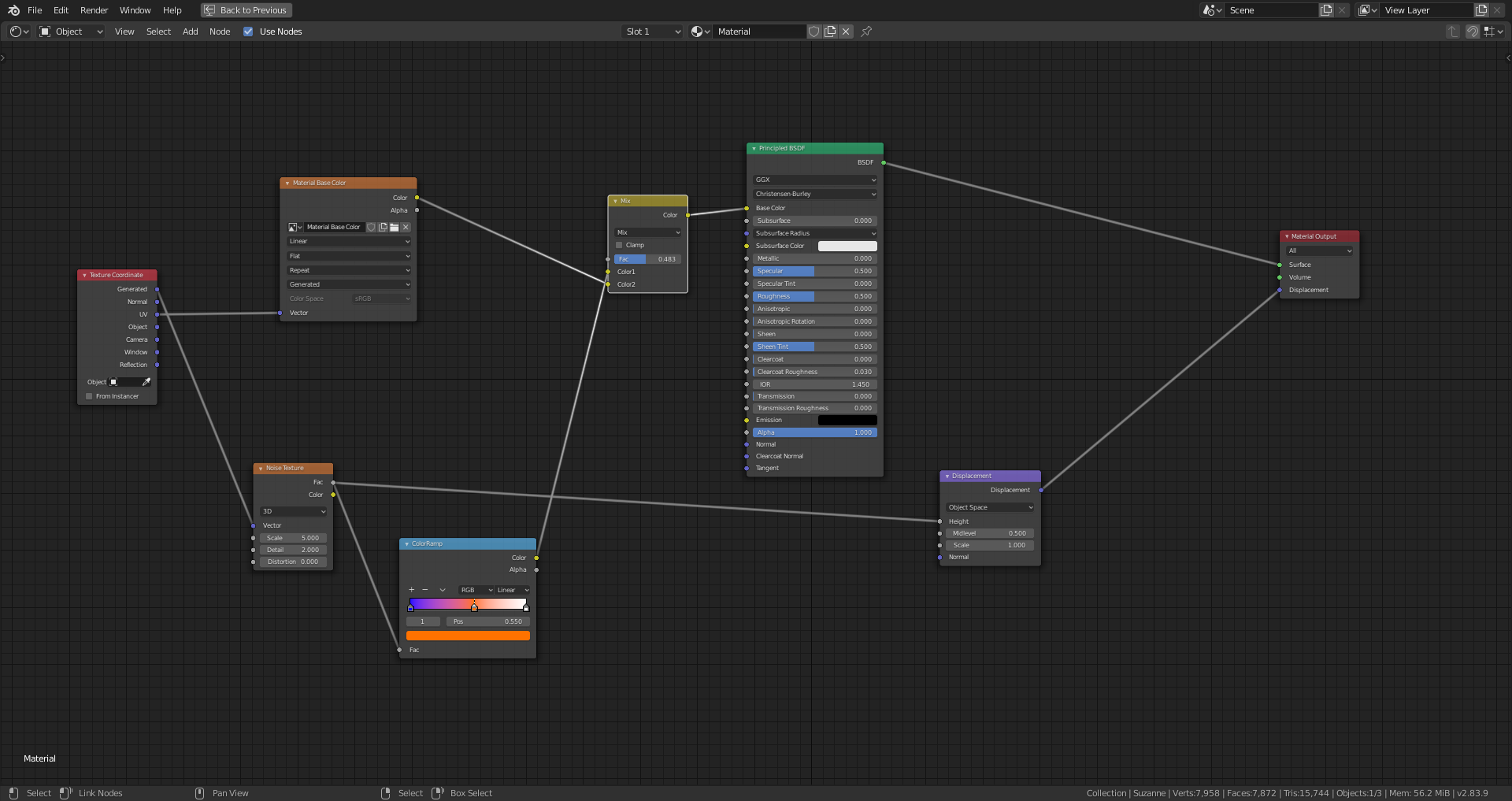 If you have to use the two shader method because they are different materials, I woudl expect you would be mixing them with a stencil to make them show up in different parts - adding them together only cause them to wash out and is a waste of processing in the node tree using two Principled BSDF nodes like that.

I figured it out - this thread helped: Can't paint texture

It was some combination of these issues: In the TexDraw default brush, there were textures under the Texture AND Texture Mask tabs, so I had to delete both of those to be able to paint. I also toggled pressure sensitivity off for the Strength of the brush - I'm not sure if that was necessary.

Craig's answer also helped because I saw that I needed to use the UV Texture Coordinate for my texture!

Not the answer you're looking for? Browse other questions tagged node-editor texture-painting or ask your own question.