How to merge all vertices by distance and remove all inner faces?

I have a bunch of 3D objects adjacent one to another (they all have a coincident face). I want to merge them all without having inner faces. I can achieve this by doing the following:

That way I end up with a single object with no inner faces.

I would like to do the same exact thing but through a Python Script. I have thought about a couple of options which I do not know how to apply:

Any help will be highly appreciated, thank you very much in advance! :)

First of all if you want to write your own basic scripts you should go to Edit -> Preferences -> Interface and enable "Python Tooltips".

After that you will see pop-up hints with python references for certain buttons, menus and values commands every time you place a mouse cursor over them. Also you can press Ctrl+C (or Cmd+C on mac) when your cursor is over the button and it will copy the python command for that button to the buffer, so you can paste it in your script.

A little bit of theory before the script. Note that in most cases copying python commands from the buttons will give you a Blender operator starting with bpy.ops. It is not prohibited to use those operators in the scripts, but it is not very stable and may cause errors because all Blender operators rely on context (exact window, screen, area and region from which it is called). There are hints to override a context, here for example. But generally the more efficient way is to use direct access to blender data and change it directly without using the operators. Unfortunately direct editing of the mesh data with Blender API is pretty... let's call it strange and unpredictable (in my opinion). There is bmesh module which has been written specially for this purpose, but I'd say it is pretty complex especially if you are a beginner not recommended. Anyway, if you are not writing a very complex program, using bpy.ops is ok.

According to your algorithm a script may look like this:

UPD. Info Window and Python Console Window can be opened as any other window in Blender: 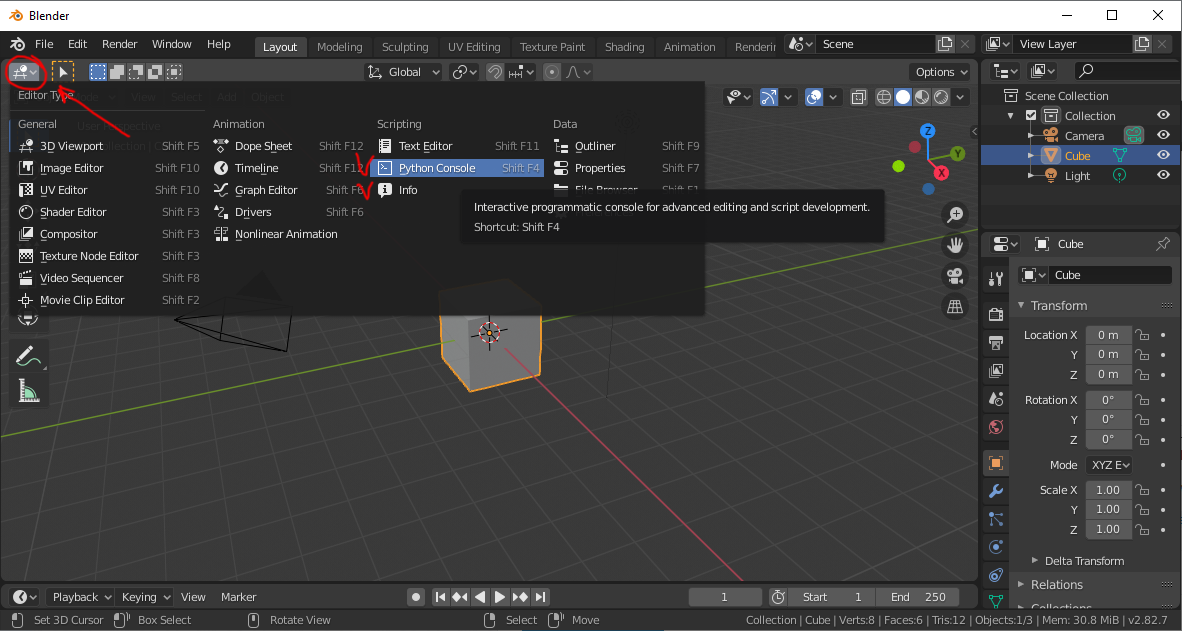 Toggle System Console in Windows opens up a system console where you can find detailed information about errors, results of your print() functions, etc.

Not the answer you're looking for? Browse other questions tagged python mesh scripting objects workflow or ask your own question.

9
Remove Doubles on multiple objects
9
How do I override context for bpy.ops.mesh.loopcut?

10
An easy way to remove all children in a parent-child relation?
1
How do I split the edges on all objects in a scene with a script?
0
Selecting object show nothing in info pane
1
How can I unsubdivide regions of flat faces with Python?
1
Problem with selecting faces vertices edges and texturing
0
Seperate objects by loose parts automatically in python
0
How to reduce mesh vertices to obtain homogenous density while maintaining manifoldness
1
Combine objects and remove interior faces?