I have this mesh with these faces that I want to "punch holes into" following a specific pattern:

I have the pattern as SVG. It has different hole shapes: 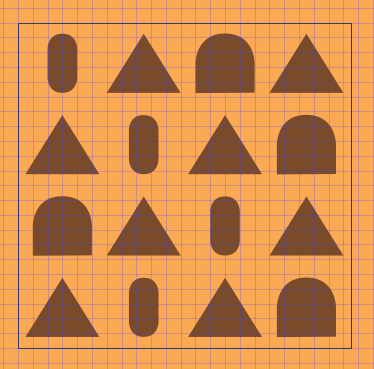 I imported the pattern, converted it into a mesh, extruded it, then applied array modifiers to repeat it: 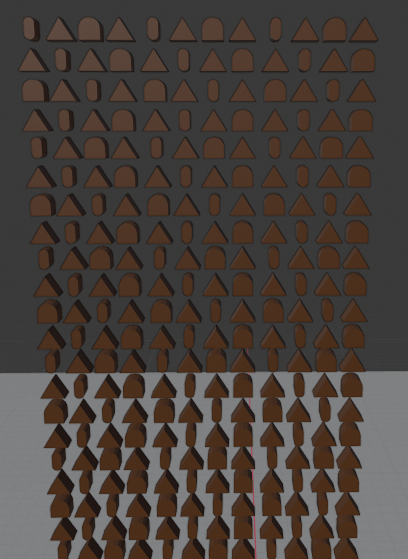 Then, I tried with one side of the mesh to keep it simple in the beginning. I separated the faces of that side, then I gave them thickness by extrusion. I applied a boolean modifier on them with the pattern mesh, then joined them back to the original mesh, and manually joined the edges (which took quite some time and I'd like not to have to do it). This is the resulting mesh: 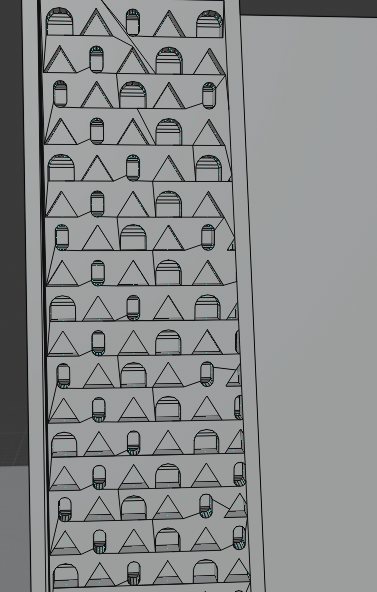 It has ngons everywhere, and has many thin tris at the edges. It also had some broken faces that I had to fix manually.

What would be a better way to achieve this, while maintaining relatively good topology?

I think this question is the opposite of this, where the hole pattern is simple with all holes being the same shape and size, while the surface is more complicated.

If the pattern is tiling then maybe create a small section first.

If it were me, I would rather import the "white portions/ not the holes" svg as a plane, remesh that plane (example used is Text but SVG acts like a text object, same topology problems https://www.youtube.com/watch?v=16_Xhzg6bRQ and/or https://www.youtube.com/watch?v=7ZDwMzjVBi0) and then solidify it. Then apply a horizontal and vertical array. After creating a big enough plane, use your desired object as the intersect boolean of the arrayed pattern.

Alternatively, you can try learning how to do bools while avoiding messy topology. I recommend Arrimus 3D's Master Booleans in Blender https://www.youtube.com/channel/UCSLLdTBwLMfTKWS56tOiQpw/search?query=master+booleans+in+blender

3
Snap to mesh issues with Z and X axis constraints
8
How can I find holes in a mesh?
0
How can I fix an unintended hole in my mesh?
2
Can I Automate Converting Groups of Triangles to Quads?
2
Boolean operation destroying topology-deleting faces
1
Clean topology with holes in a mesh with bevel modifier?
1
Maintaining Good Topology When Part of a Mesh Becomes Non-Quad
3
Turn ngons left after beveling into quads
1
Join meshes together without lining up edges