How do I remove doubled faces? Merge by Distance isn't behaving properly

I keep running into this problem. I have tried to rebuild this mesh three times now... I'm building a flat mesh on the X + Y Axis only using extrusion Ctrl + E, Shift + Zetc. When I finish I keep getting doubled faces, indicated by the different shading on the affected faces. (I'll attach screengrabs). What is the best way to fix this?

I have tried Clean Up > Merge by Distance, but it removes loads of faces entirely, not just the doubles, and then bizarrely I can't add the face back by selecting the vertices and pressing F. If I select all the affected vertices and delete faces it deletes both faces.

Help in this matter would be greatly appreciated, thank you. 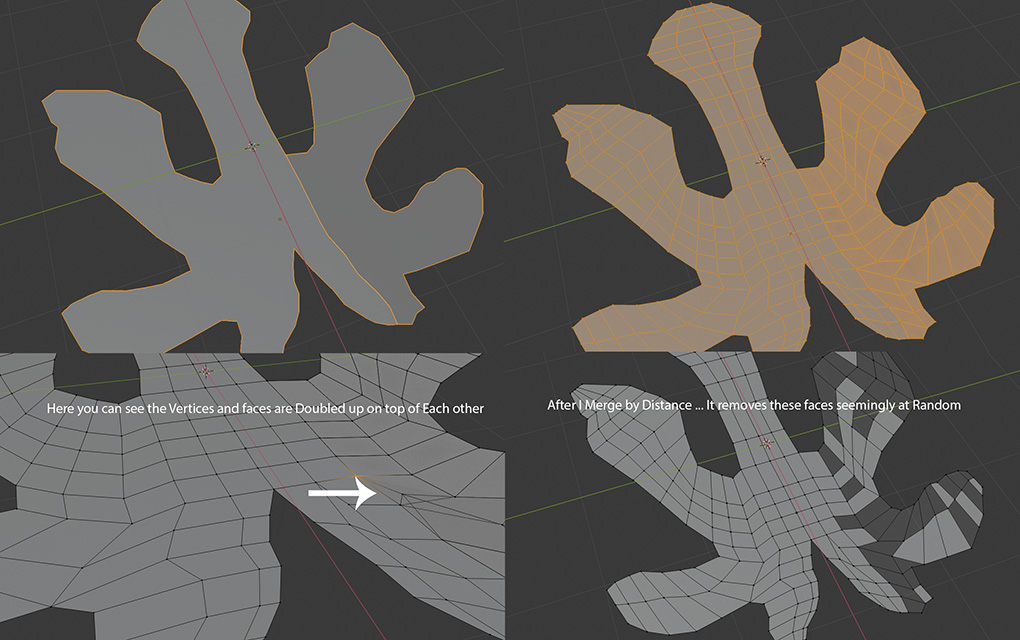 Revisiting this for continuity. And answering my own question. I continued to have this issue, with doubled faces and inconsistent 'shading' on the faces on further mesh builds, using Extraction E to build a flat (2D) mesh.

There were two problems: Duplicate vertices and Normals direction of the faces.

Because it was a simple mesh I was able to remove the doubled vertices manually. But it can also be solved using the command from the 'Mesh' Drop down: Clean Up > Merge by Distance. Although this doesn't always seem to behave perfectly and may still require some manual work.

This didn't always result in accurately recalculating the normals either. One can recalculate normals from the same Menu 'Mesh' > Normals > Flip, Recalculate, Rotate etc. But to do individual faces they need to be manually selected I believe.

To choose individual faces use Face Select mode 3 and Recalculate or Flip only selected faces.

In all of this I wasn't able to figure out why Blender sometimes (seemingly randomly) flips the normals or duplicates vertices, but with a little diligence they can be adjusted as one is building the mesh.

I hope that helps someone who is encountering a similar problem in their early days getting their head round Blender.

1
How can I join meshes that are separated by dotted lines?
1
How can I delete overlapping faces when the faces are in multiple objects?
1
How to delete internal intesected faces?
2
Repairing a Mirror Modifier centre-line non-manifold edges (2.8)
1
How to fix warped faces when using boolean modifier on curved objects?
0
serious extrusion tool problem - why multiple additional vertices are created at one coordinate after cancelling extrusion?
1
Extrude curve into 'shell', evenly thicken shell