Using Blender with wider gamut than 709 primaries (like ACES)

There is a similar old unanswered question on this site with some vague comments (ACES workflow in Blender), so I'll ask it differently:

Is it possible to work in blender 2.8 with color spaces that use a wider gamut than Rec709?

Is blender's cycles still limited to Rec709 primaries only, or can it render images with wider gamuts?

Is the information on this link: Blender & ACES 1.2 accurate?, meaning that all it takes is to have a different config.ocio and the corresponding LUTS and set a system variable for OCIO, as stated also in ACES setup for blender using OCIO?

Additionally, I've found this article on how to work with Alexa Wide Gamut color space. Is that the only color wide gamut space that is usable today?

I hope someone (like @troy_s) can shed some light on this. Thanks.

Yes you can use ACES OCIO config in Blender, but...

@troy_s don't hesitate to correct mistakes or add infos to what follows.

I've just try it since 2 days, I've seen the new ACES 1.2 OCIO config pop up and decided to give it a try. At the begining I was quite enthusiastic, made some tests, more saturated, ACES config need adapting color values.

Since you can't change the colorspace of the color wheels, they are going completely crazy, click on a color of the wheel, then in HUE change the saturation, or click and drag on the wheel, it speaks for itself, if a dev read this, we really need to have color managed RGB color wheels as well as a better color picker... if we want to work with other colorspaces.

Knowing that I thought, ok I know this limitation, so I can be carefull and use only RGB channels to set my colors (a pain but I've tried it and managed to make an ACES test scene)

I was quite happy with the render result even if it looks a bit too saturated and then I realised that the glossiness looks less present, perhaps it's like Filmic that looks to desaturated at the beginning because we weren't used to it, for this part I don't know if it's something expected and normal or not.

However, today I've made tests with a chart image to see if it is correctly interpreted.

Images aren't correctly converted. I have this sRGB chart as a base to see what a transfer from ACEScg color space to sRGB should look (sorry I never know if it's EOTF or OETF): 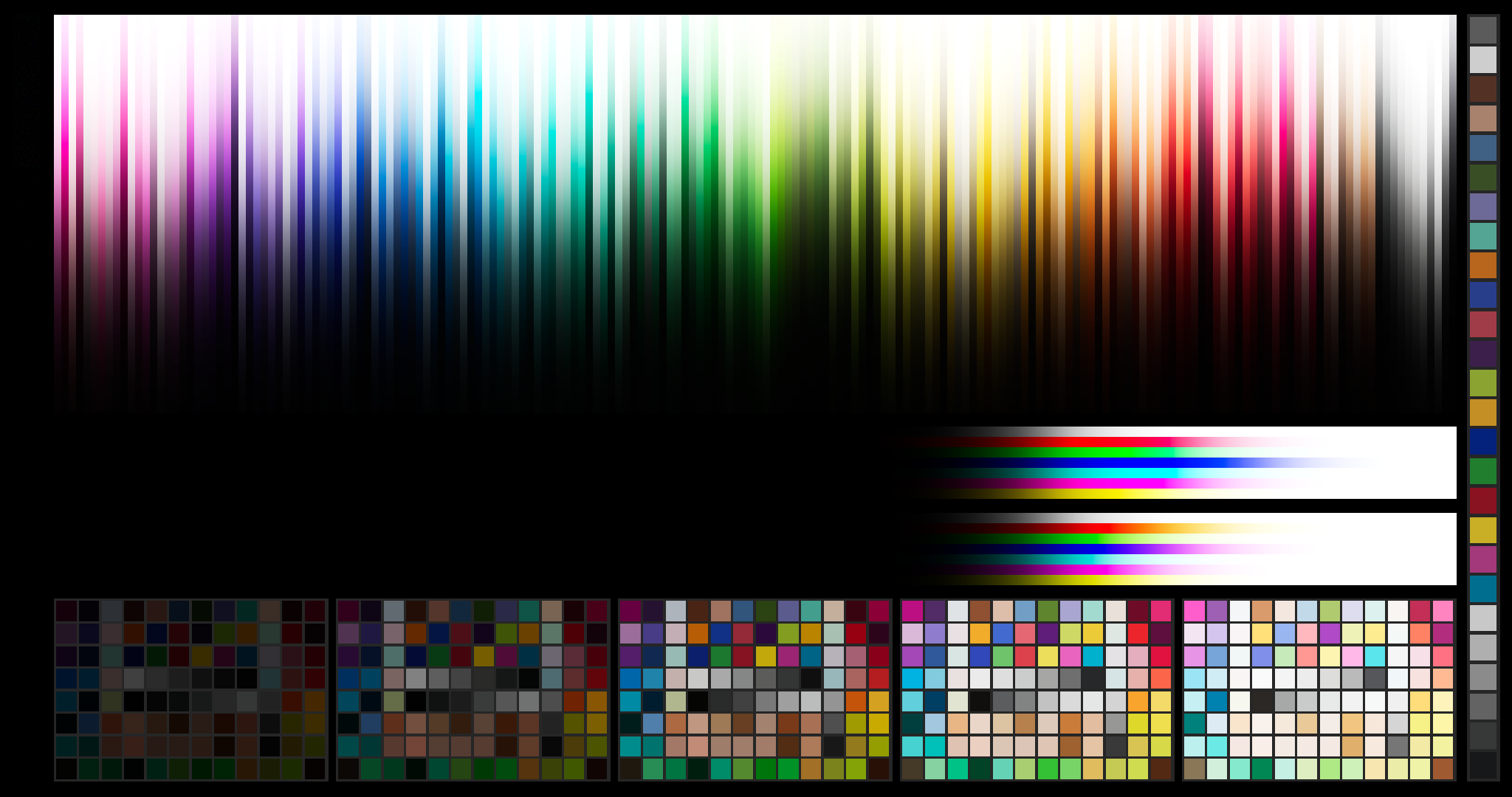 A screenshot of the convertion from ACEScg to sRGB, we can see is that it don't react very well: 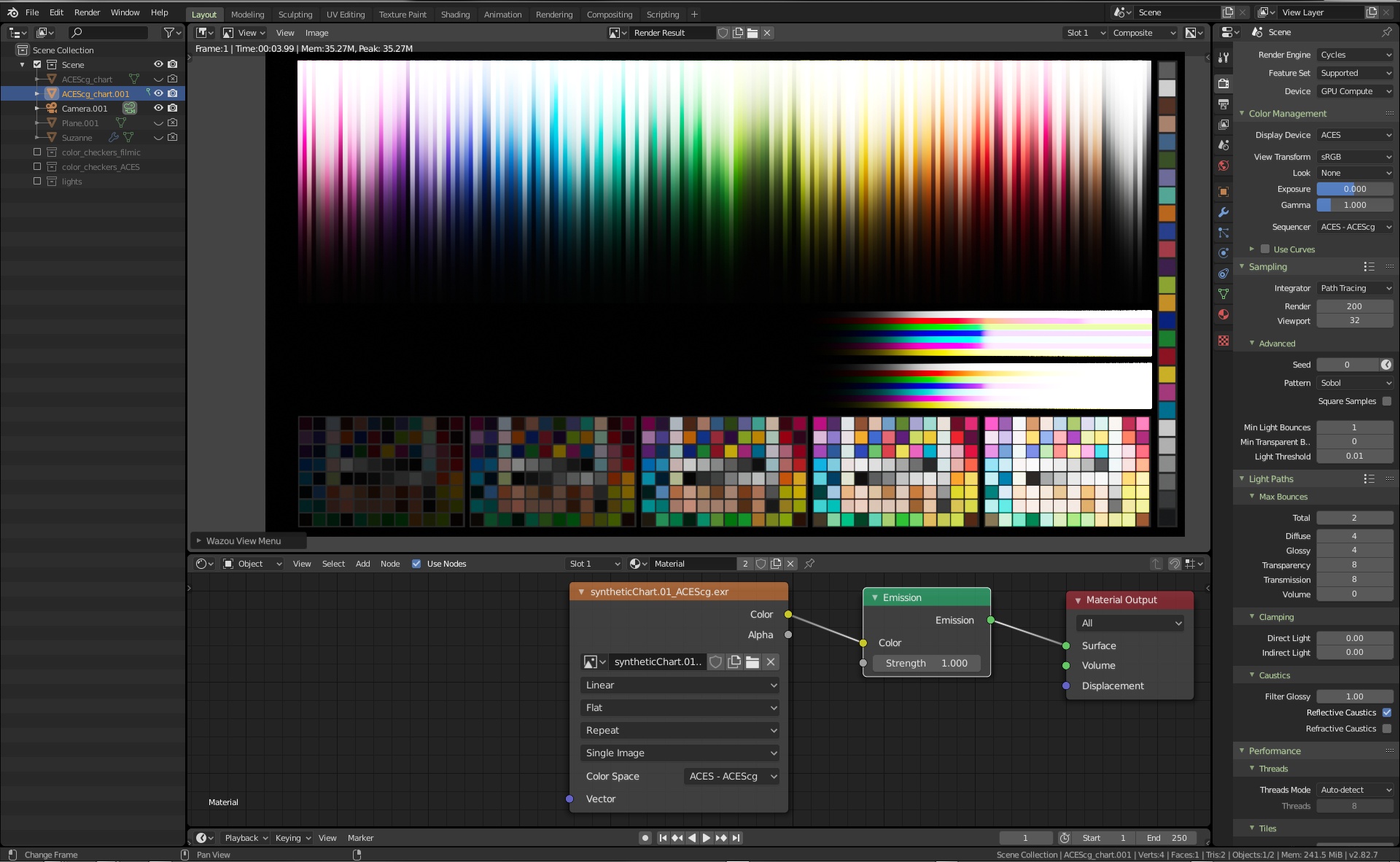 Even in Resolve/Fusion it's not 100% correct: 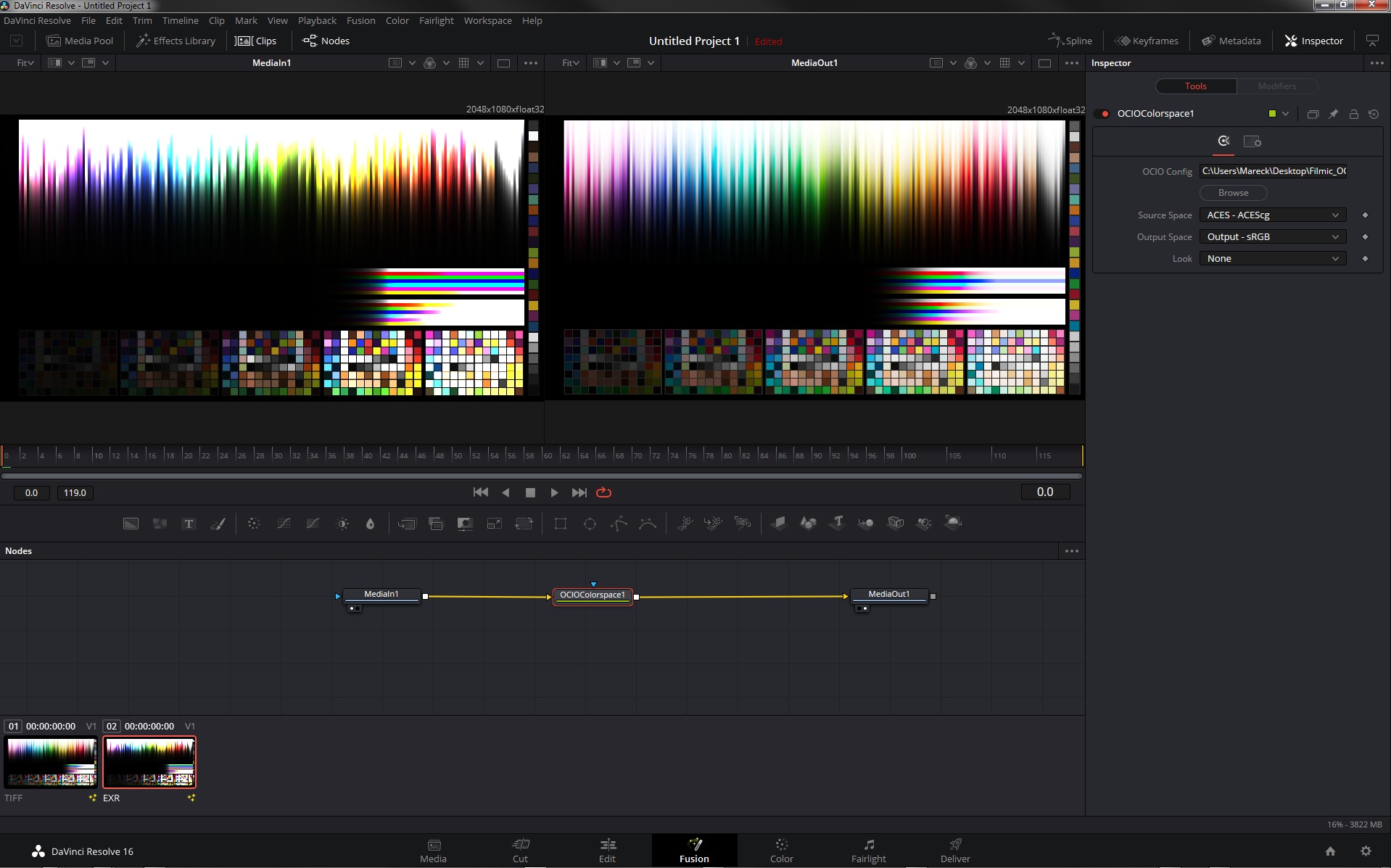 I don't know if the color difference is a big deal for a normal scene, but it makes me doubt that it's a valid workflow inside Blender, for now. If someone see a mistake in my test let me know.

I will perhaps try a real scene to confirm all of that, but looks like for the time being, there is nothing better than this great Filmic OCIO config we already have.

In fact all of this makes me think that I understand a bit better my fist test with ACES.
I've made a simple scene only with shader colors, no textures, resulting in an oversaturated image. What made me thought that, like Filmic at the begining we would have to adapt a bit the workflow, but now that I look at the wrong desaturation of the bars of the chart, it feels normal that I have an oversaturated image, and that it's not a workflow to adapt but that I'm fighting a wrong colorspace convertion. 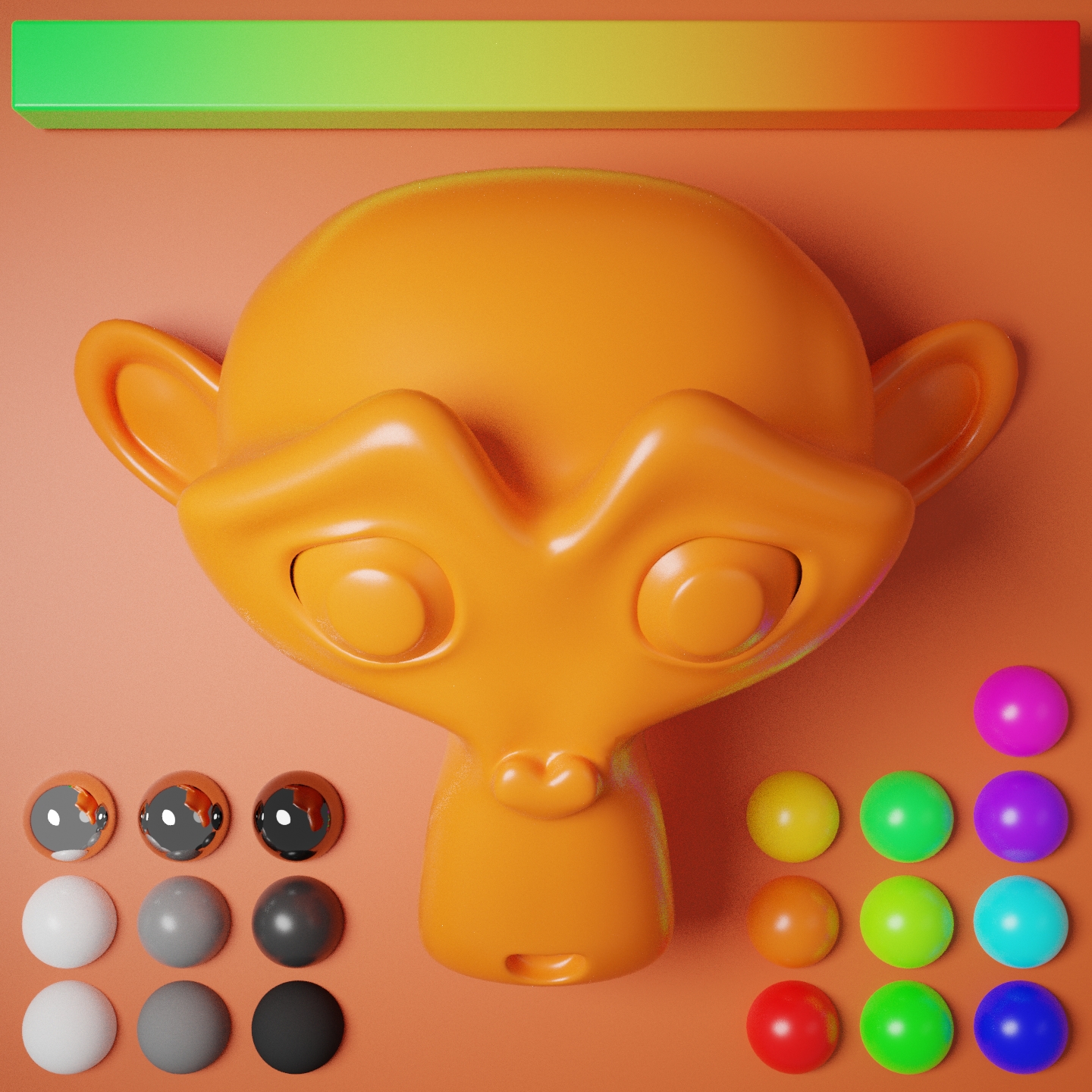 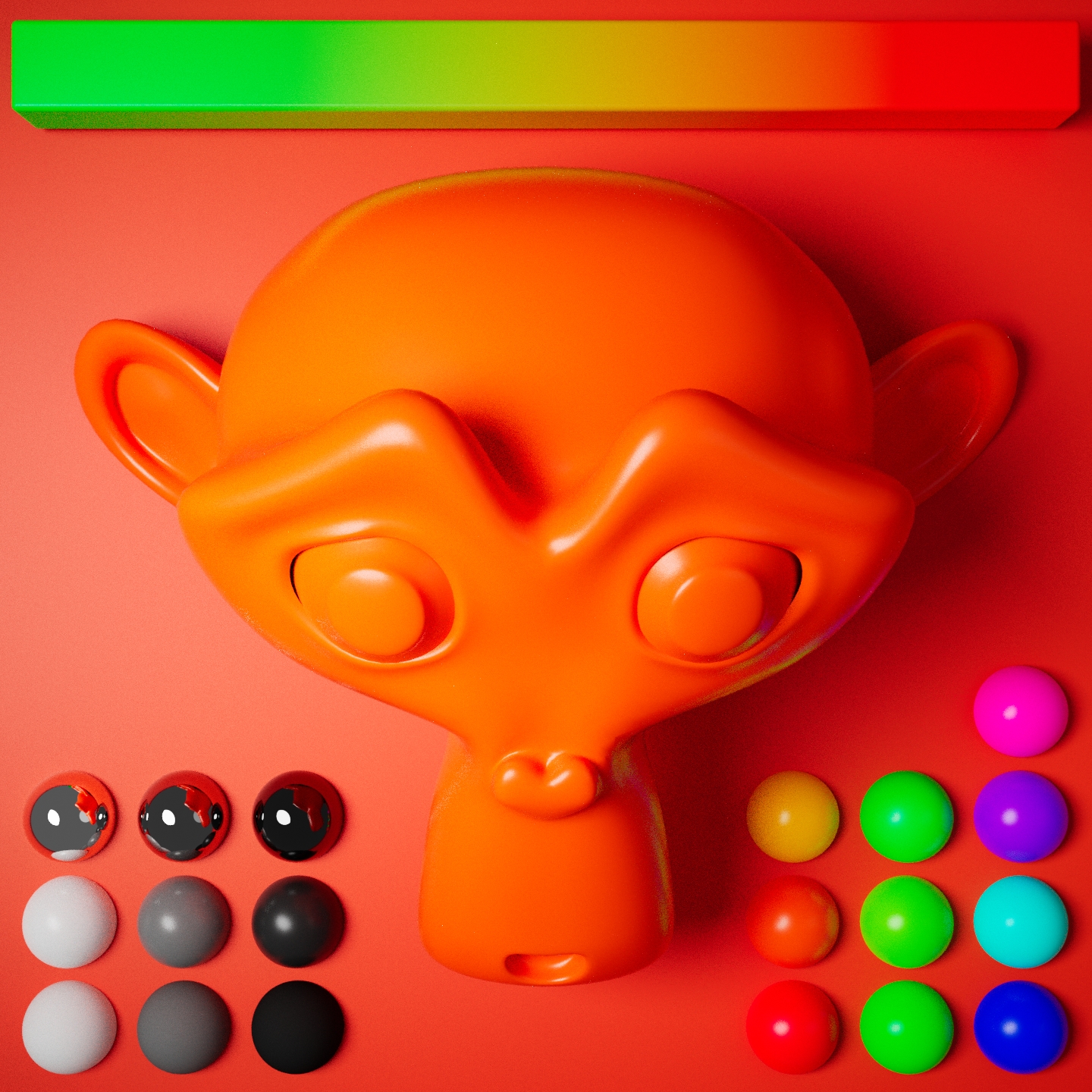 I've just understood some fundamentals things, and then read Troy's comment that confirm it.
I've made mistakes, and like he said I've learned a lot from them.
I will surely make more but perhapse all of this will help other to understand this so complicated topic.

What I've just realised is that ACES OCIO config doesn't map primaries to rec709 ones, it clamps them. So the desaturation of the top horizontal bars can't be something else, in fact I've ask someone to try with an other render engin (he tries with Guerilla render) I was shocked that it was the same.

And what we see on my test scene rendered in ACEScg is just that, clamped gamut, a bit like the clamped intensity of Blender's standard(sRGB) view transform but with gamut.

One other thing I've realised is that wider gamut isn't about having better color display on a standard monitor but having more colors to display to a wide gamut monitor and surely internals calculations. Perhaps it looks obvious but this topic has so much confusing part that I was thinking, converting from a colorspace to an other was also to match primaries from the first one to the other but it's not what ACES does.

So, can you use ACES OCIO config in Blender, yes, would I use it to have better images than with filmic, hell no. Even if Filmic isn't perfect, I think it's still better than to fight clamping gamut, unmanaged color wheels... and I don't think the cases where you would see a gain compare to Filmic worth the pain. If you need ACES it's for other reasons.

I'll surely add more stuff here later when my knowledge grows, or perhaps add a new question on Stack Exchange, like for exemple converting rec709 values (or pointer's gamut ones) to ACEScg colorspace.

Blender uses OpenColorIO therefore it is possible to use the OCIO configuration and view transforms for ACES. This is documented in Blender's manual.

The standard Blender configuration includes support for saving and loading images in ACES (code and documentation) color spaces. However, the ACES gamut is larger than the Rec. 709 gamut, so for best results, an ACES specific configuration file should be used. OpenColorIO provides an ACES configuration file, though it may need a few more tweaks to be usable in production.

Please note that I haven't used ACES and there may be parts of Blender that don't work well with this modification, e.g. Video Sequence Editor, Compositor, color pickers or add-ons that rely on color spaces from the original OCIO configuration. 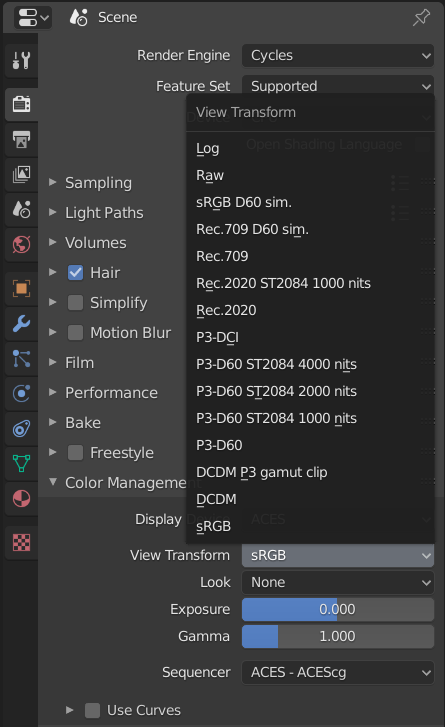 Not the answer you're looking for? Browse other questions tagged rendering color-management lut or ask your own question.

1
Color Management: Linear ACES to After Effects
5
Integrating CG imagery with footage from cameras using ACES
4
How do I output to HDR10 Movie format in Blender?
4
ACES workflow in Blender

3
How do I configure ocio to use an existing Premiere .cube lut in Blender?
1
How do you create an aura, or halo effect, like what was possible with the internal Blender Render Engine, in 2.80
1
Blender 2.8 uses CPU rather than GPU, contradicting with settings
5
Integrating CG imagery with footage from cameras using ACES
0
Using Cycles Render engine with AMD GPU crashes Blender 2.83.5