In my fluid simulation all inflows are disabled until around frame 620. There is absolutely no fluid in the scene up until this point.

I would have thought that the fluid simulator would quickly process these frames and skip them since it would be trivial to determine that there is no fluid to simulate.

However, during baking these frames are taking as long to process as a frame full of fluid would. It seems like it is going to take blender an hour to "bake" 600 frames with zero fluid.

Is there any way to make blender skip the processing of these frames and only start the actual simulation at around frame 600?

The speedup is possible:

Update based on comment for Blender 2.81a:
(To my best knowledge, as it is a good bit more complex.) 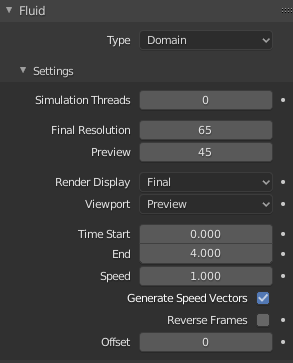 This older version does not use Mantaflow, means it's still using the older fluid solver, which takes it's Time Start and End values as Seconds and not frames.

There is a bit more to the simulation with the old solver:

Friendly suggestion, I'd update to the new stable Blender version 2.82a with Mantaflow if possible, as below shown the setting up became a lot easier: You may not only have to time the inflow(s), but also set the Frame Start in the domain. See picture below, the frames that will be calculated, be there fluid or not, are set in the Cache Section. All in frames. 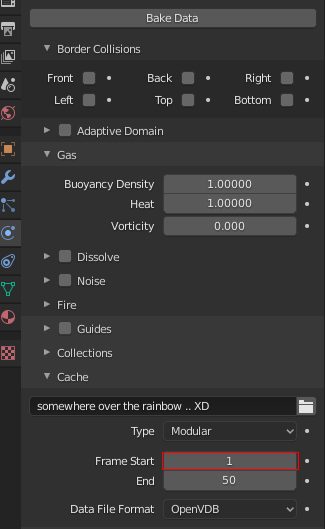 While you can always cut off the inflow, the simulation is stubborn and goes through all frames between Frame Start and End when you bake.

Not the answer you're looking for? Browse other questions tagged baking fluid-simulation or ask your own question.

3
I am trying to fill a bottle with liquid

2
How to determine the poly/vert counts of a fluid simulation?
1
Workaround for Resuming Fluid Simulation
2
capturing a frame simulation of cloth, particle as initial state