Why does the parent go haywire, when the child's rigid body physics is set to “animated”?

Backstory: Hey, I simulated a rollover-crash using rigid body physics. To top it all off, I wanted to smash one of the windows after the crash, using the fracture modifier.

The crash consists out of two parts: The animated part, and the simulated part. The crash goes from animated to simulated by animating the checkbox "animated" in the rigid-body-settings to unchecked.

My problem: When I executed the fracture on the window, It would start falling apart right at frame one. Since I wanted it to happen after the crash, I decided it shall go from animated to simulated much later than the main-parent. But once the main-parent goes into the simulated part, while the window is still in the animated, the car goes crazy. Like a glitch, or an extreme epileptic seizure.

I have no idea why it does that. When the window goes into the animated-part at the same time, or even before the main-parent, it's completly fine. I'm out of ideas, of why that happens.

I'm pretty sure it has something to do with the fracture modifer, but there aren't many settings I changed. I've set the shard count to 100, executed the fracture, and animated the checkbbox. That's it.

I still don't know why it does that, but I have found a way to perfectly avoid this bug.

Suprisingly, is has nothing to do with the fracture modifier, or the child, but instead with the rigid body simulation.

In order to avoid this bug, 2 small steps are required: 1) After simulating the rigid-body-physics, the simulation must be baked. The settings for that are not in the "Physics" tab, but in the "Scene" tab.

2) After baking, the simulation must be "baked to keyframes" The settings for that aren't in the "physics" tab nor in the "scene" tab, but in a place entirely else. Both tabs are in the Editor-type "Properties". But all the way on the other side in the so called "3D View Tools pane", in the "Physics tab" are the settings needed. 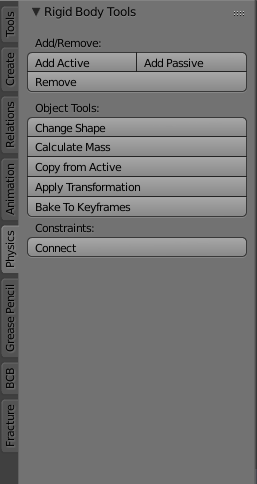 After these 2 steps are done, the rigid body settings in the "physics" tab can be closed, because the simulation is now an animation. The fracture modifier and the rigid-body phsyics on all children now work the way they schould.

Not the answer you're looking for? Browse other questions tagged rigid-body-simulation parent or ask your own question.