How can I improve my mesh imported from Sketchup?

I have created a mesh in Sketchup Pro, imported using a plugin in an older version of Blender, and then opened the file in the latest build. As you can see the Mesh looks awful. As I plan to use Brick and tile textures, I'm guessing I will need to do some cleaning of the mesh first?

Is there a better way to import the files that will give me a cleaner mesh? I have the pro version, so lots of options. Do I need to add Loopcuts and new edges everywhere to get rid of the triangle faces?

Any advice on where to go next to make texturing simpler would be appreciated. 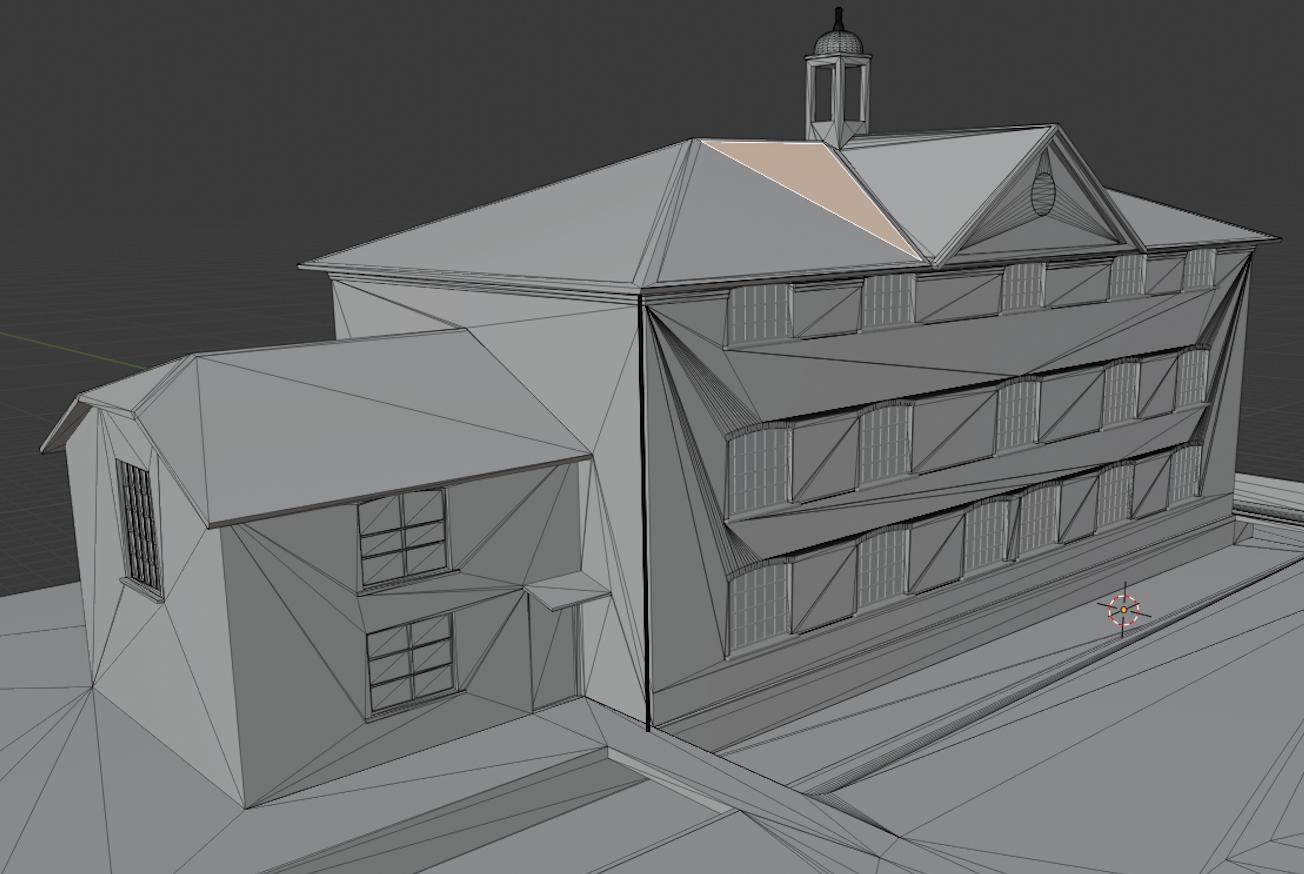 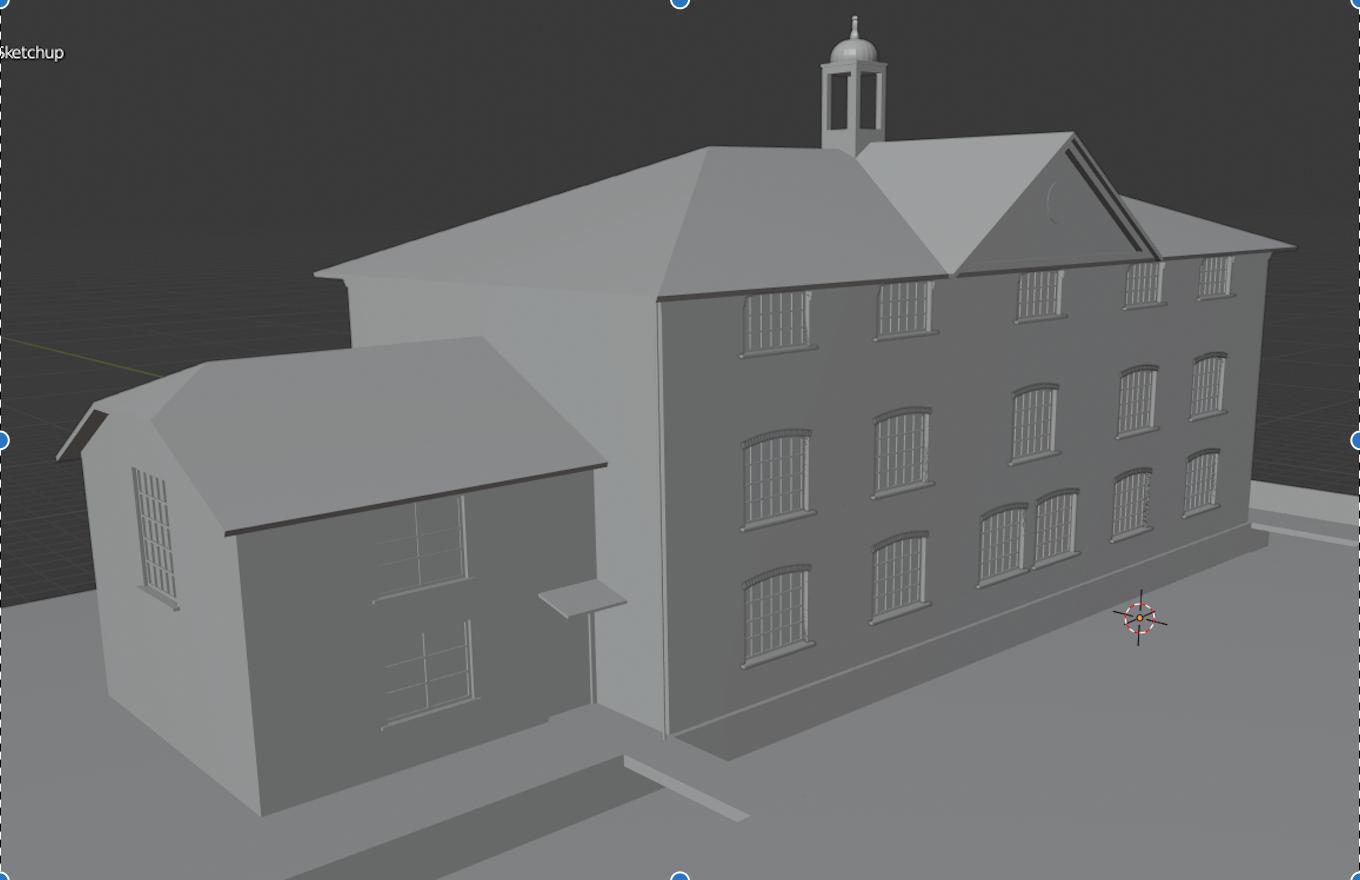 Is there a better way to import the files that will give me a cleaner mesh?

This is less a Blender question at this point than a Sketchup question; The import isn't making all the tris, Sketchup is. Perhaps see if there's a "quads" export option.

Assuming that isn't an option (because if it is, you can stop reading), you have two options;

1: Retopologize the mesh (either by modifying the current mesh, or by making a new mesh on top of that one with the intention of recreating the same shape with a different edge flow)

2: Don't model in Sketchup first (obviously not applicable for this model, this is future-looking).

If my memory of Sketchup holds true, it isn't concerned with per-vertex manipulation, it just allows you to make shapes and plunk them together. That said, you will always get haphazard meshes from it. If you start with Blender, you can keep edge-flow in mind from the get-go, and you can skip all the cleanup or remeshing.

Do I need to add Loopcuts and new edges everywhere to get rid of the triangle faces?

No. Yes. Kind of both, depending on what you need;

Also, in general, if you are working on hard surfaces (mostly non-biological, like a house, or a car) you can forgo loop cuts throughout the model by carving up a face, then terminating the edges locally. For example, let's say you started with this house (forgive the quick model); 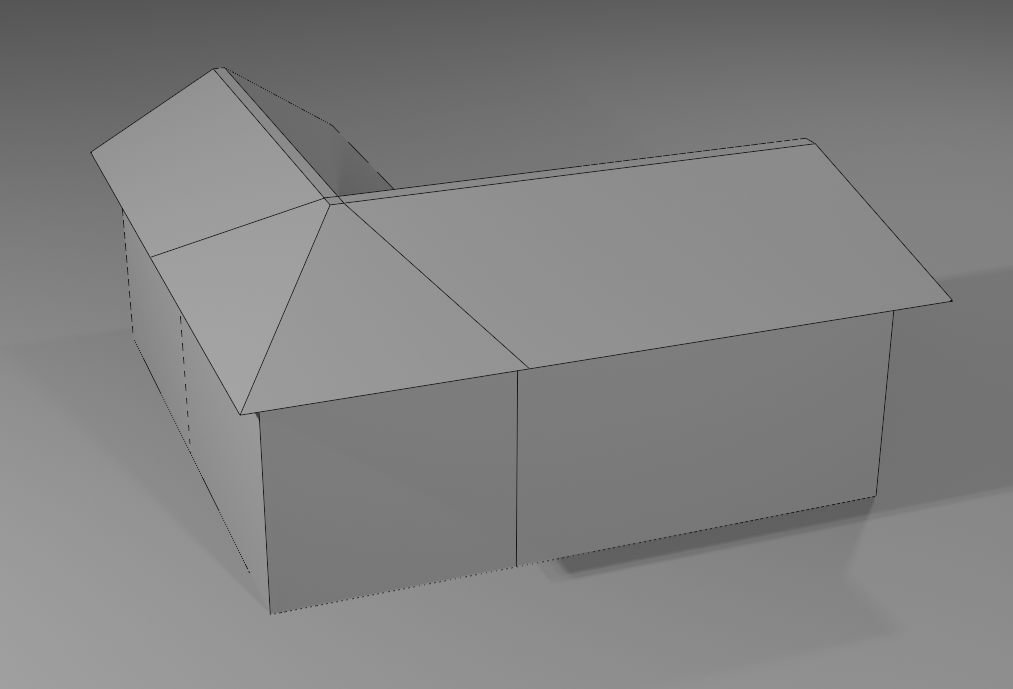 Now, you want to add a door here, but then these would be the loop cuts; 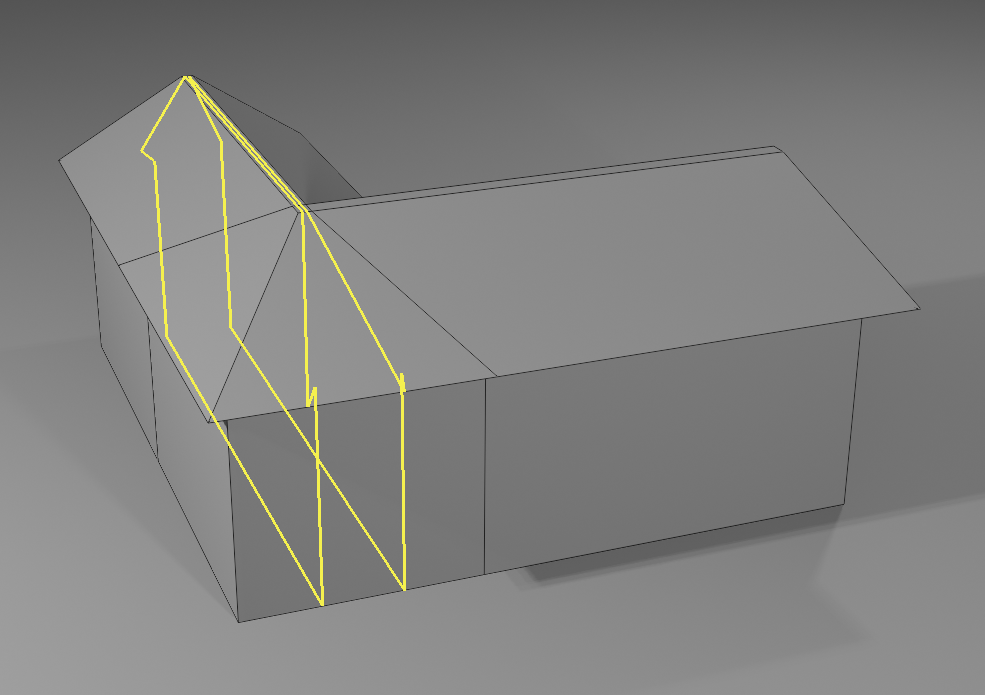 Yuk. Instead, you could add the following edges; 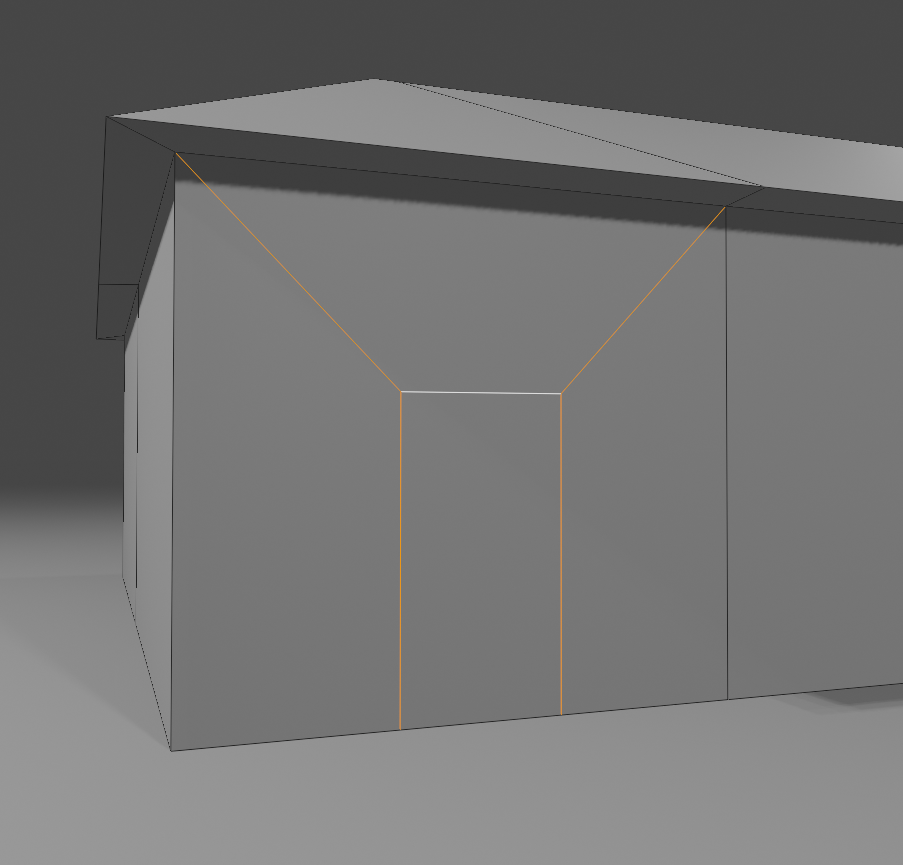 Now you can extrude out that one face, and you have the start of a door; 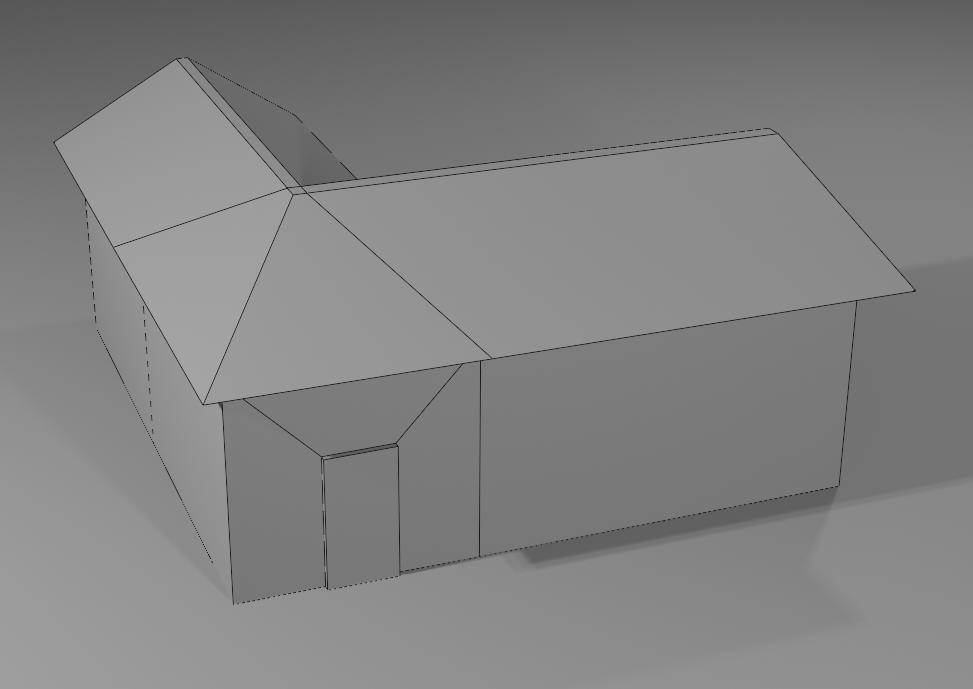 (Then maybe you add a door frame, get a little fancier, etc etc); 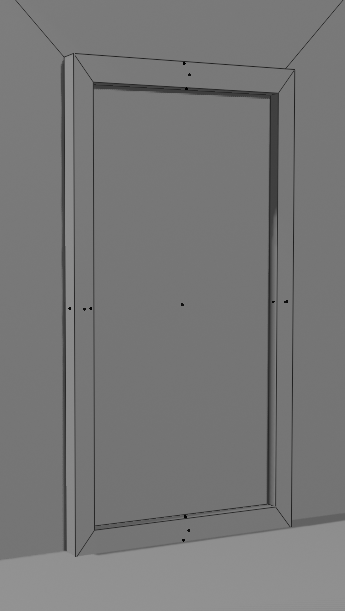 Of course, this is all well and good, and everything is still in quads, but it can be argued that you've traded one problem (bad edge flow) with another (poles). What's a pole? Any vertex with more than 4 edges. We've created 2; 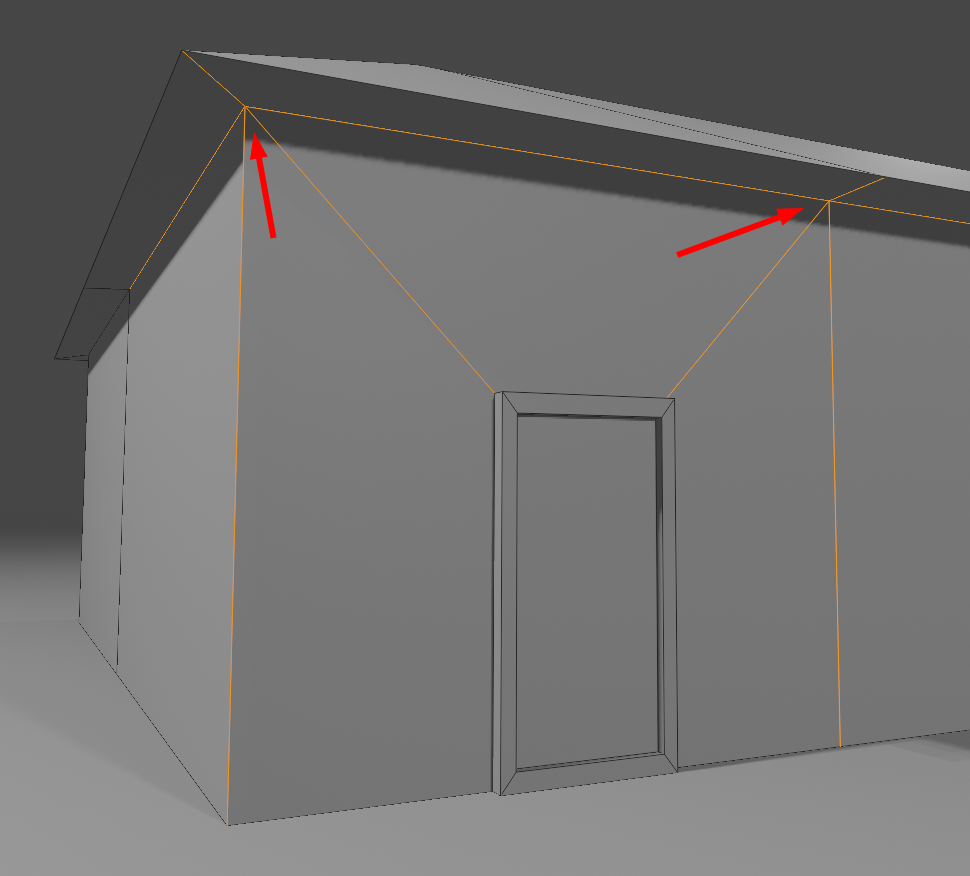 Now, this is a VERY wide topic, so you'll want to research both edge flow and poles, but the short version - in this specific case - is that

1: This is a solid structure that might be subdivided, but won't be distorted (like a human elbow or shoulder model might need to deform). So the poles shouldn't be an issue

2: We've hidden them in an out of the way area (which also applies to a human model). At some point or another, many models will end up with poles, even subdivided biological ones. The key is to hide the pole (and thus, the potential artifacting and UV issues) somewhere out of the way (like a rafter, or an arm-pit, or a nostril).

The above example works on windows as well. Not only would you have cut through the roof; 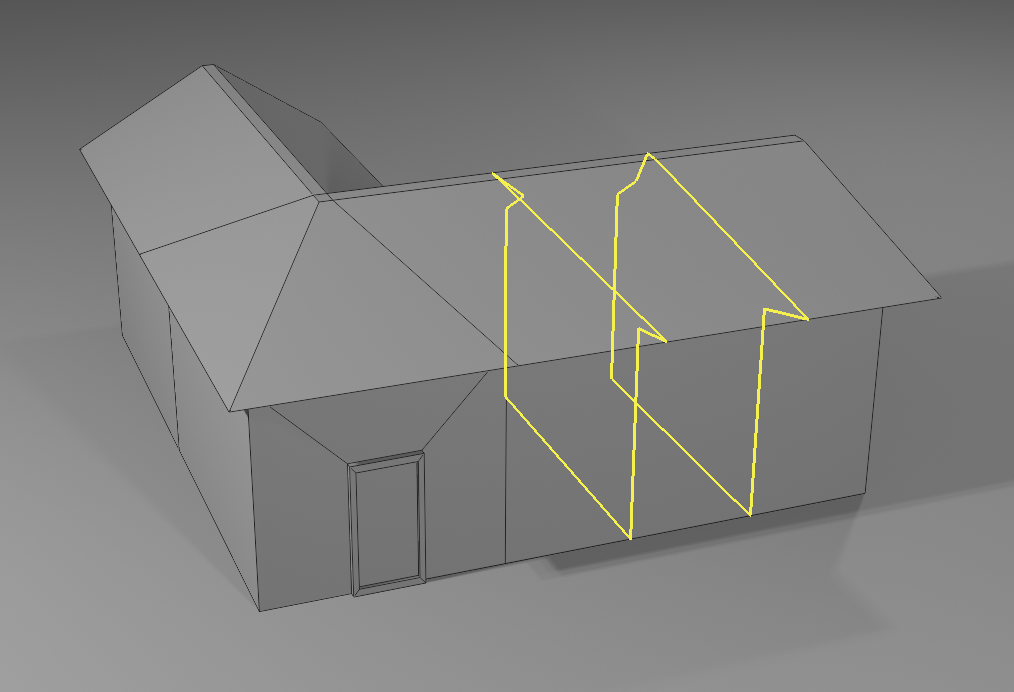 You would have cut through the entire middle of the house (and any other details along the way); 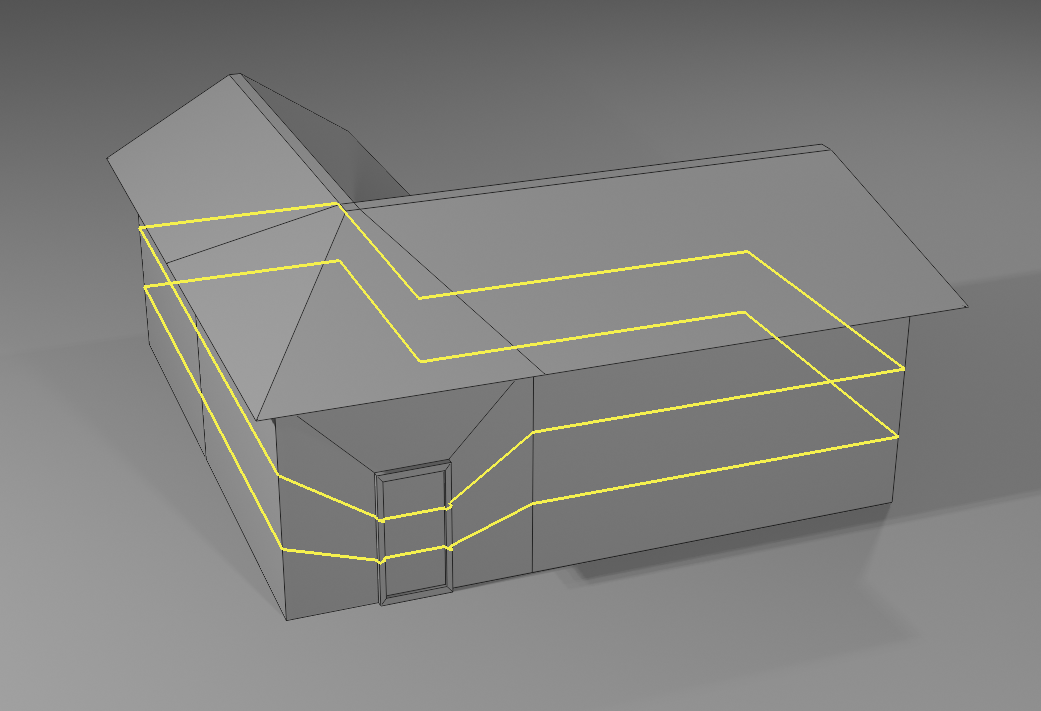 Oof. But we can apply roughly the same process as before. You can use "cut" (the "k" key) to draw the basic shape (hitting enter at the end); 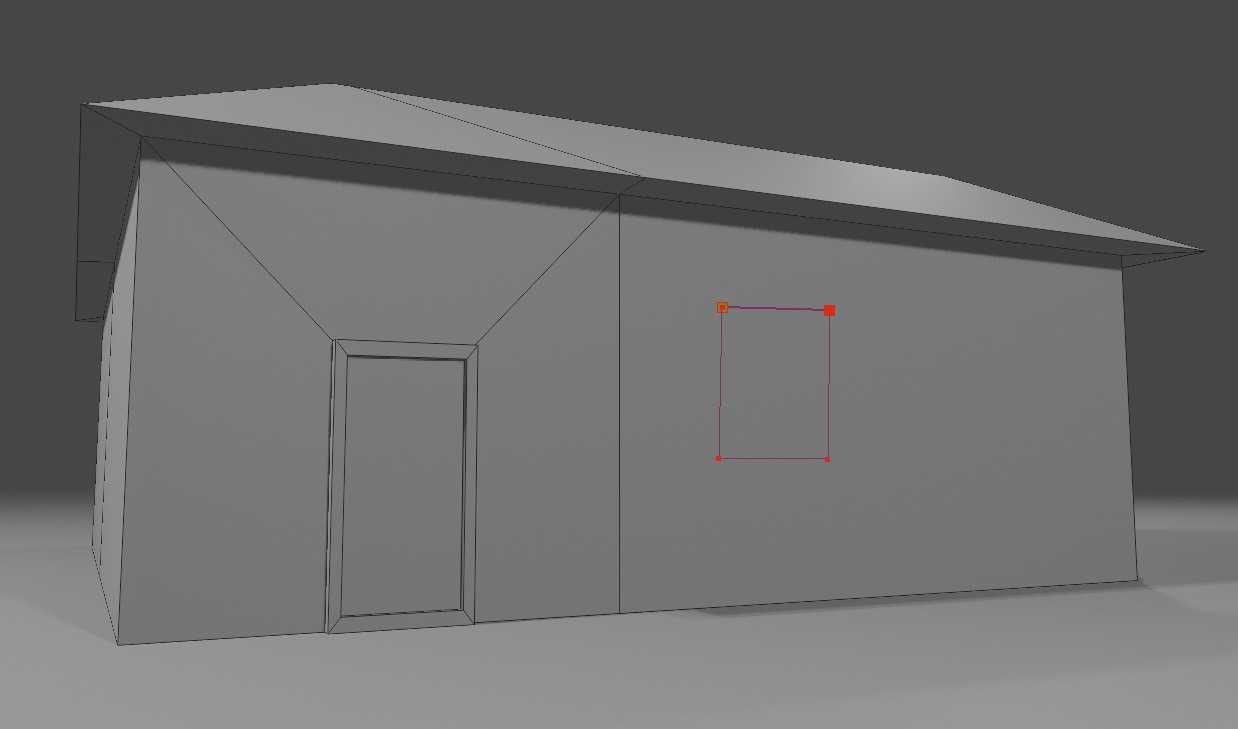 Then use "cut" again to fill in the missing edges (one at a time, hitting enter after each); 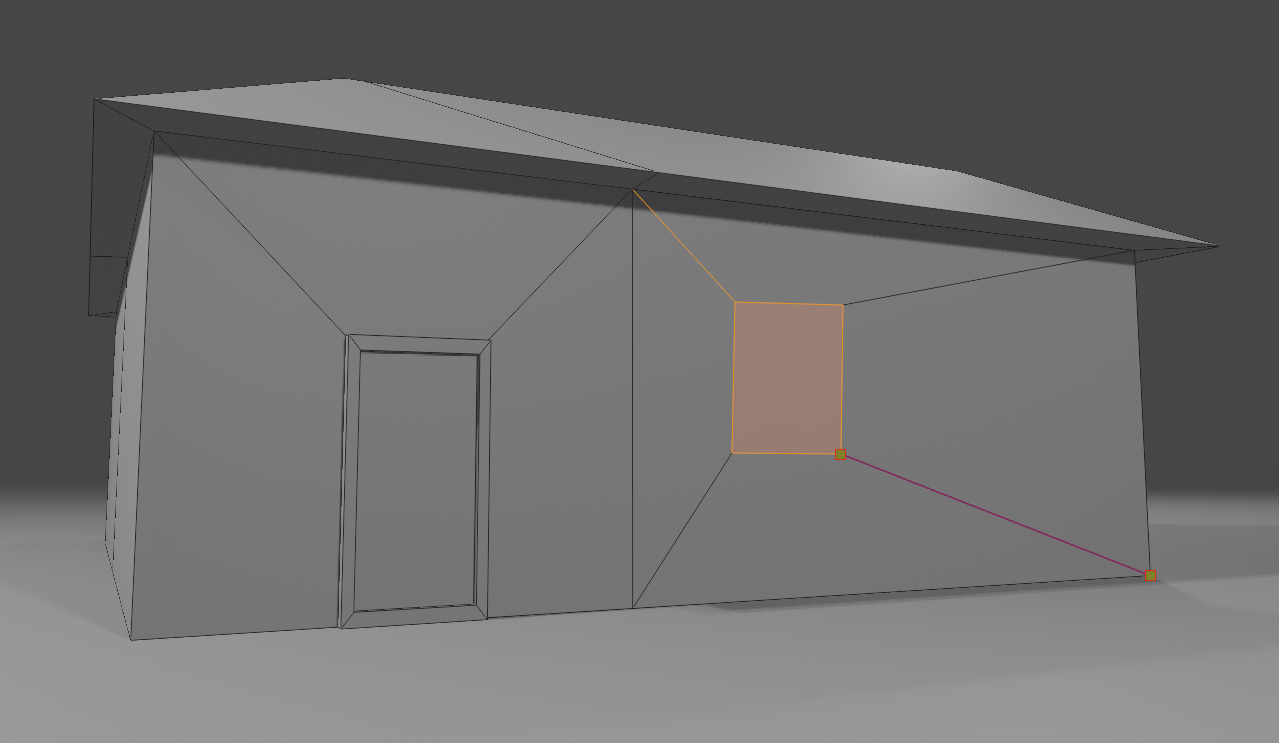 Two windows can be achieved with the following pattern; 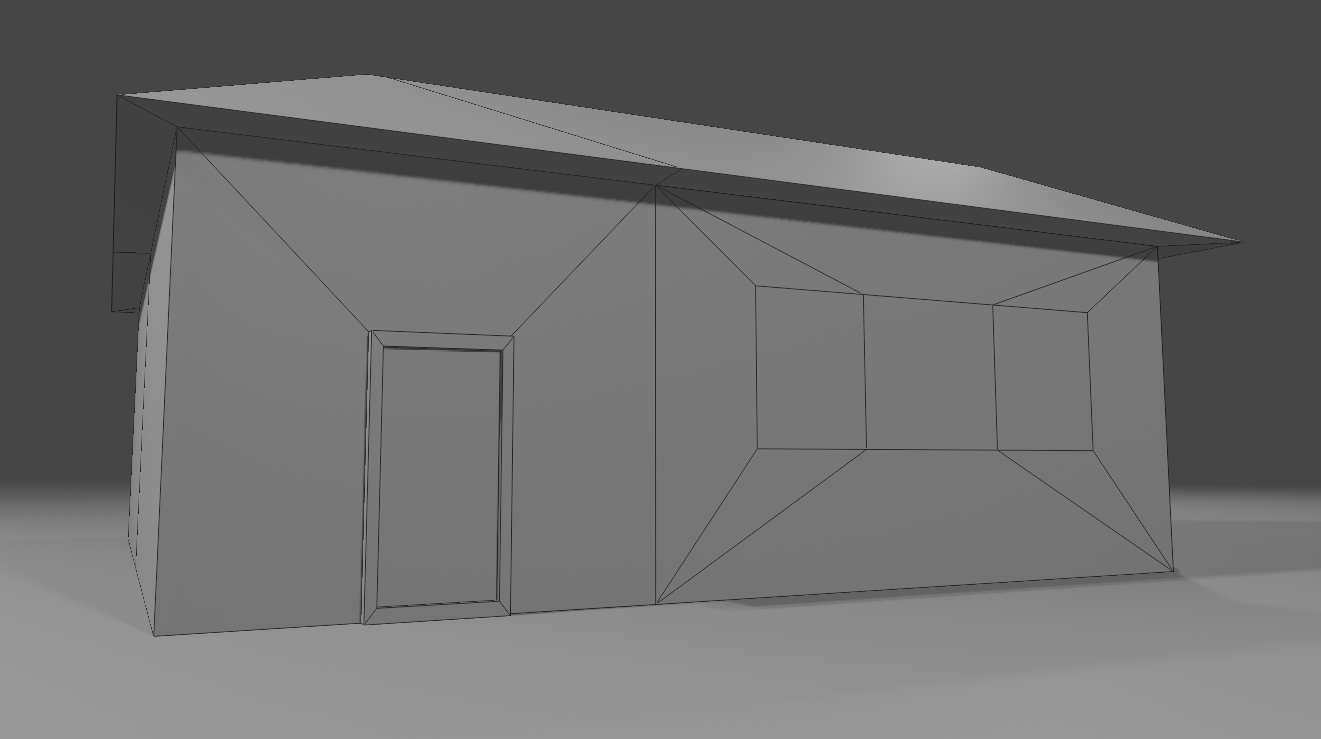 Of course, now we have 4 Tris. If you want to reduce that to 2, you can add a single loop cut (instead of the 4 you might have tried before, one for each left and right side of each window); 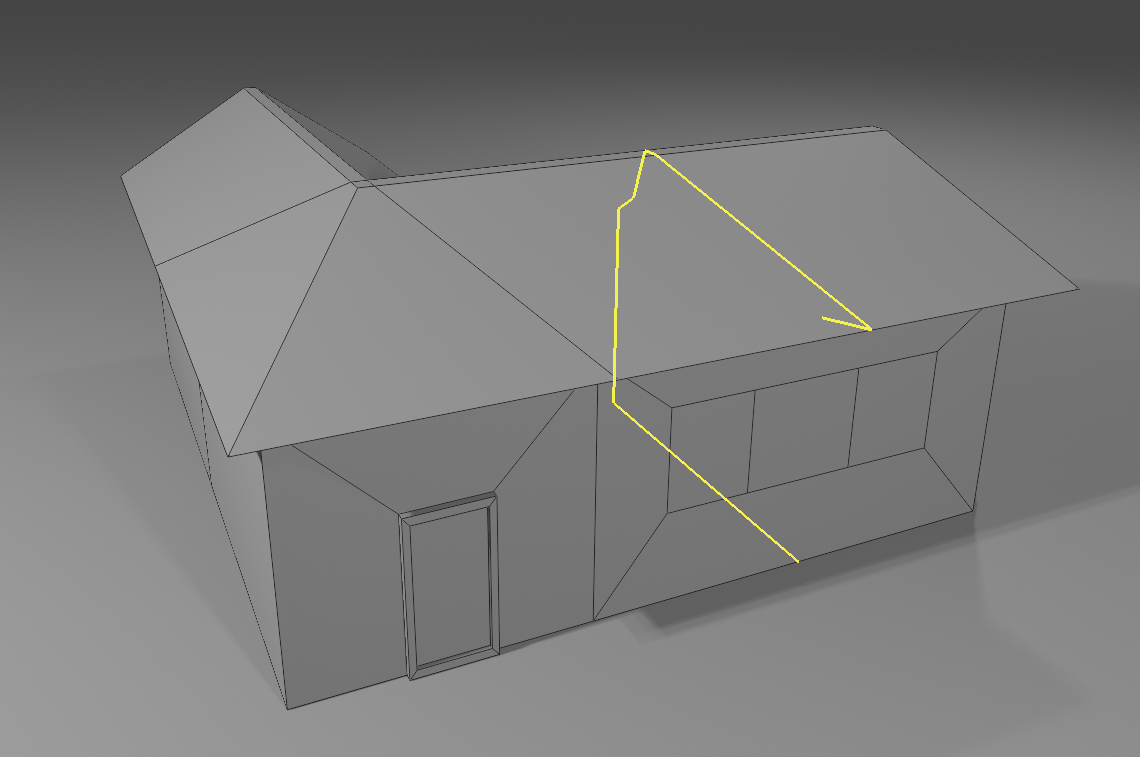 Then you arrange the edges like this (and maybe extrude some faces for window frames, first pulling them out, then pushing them back in); 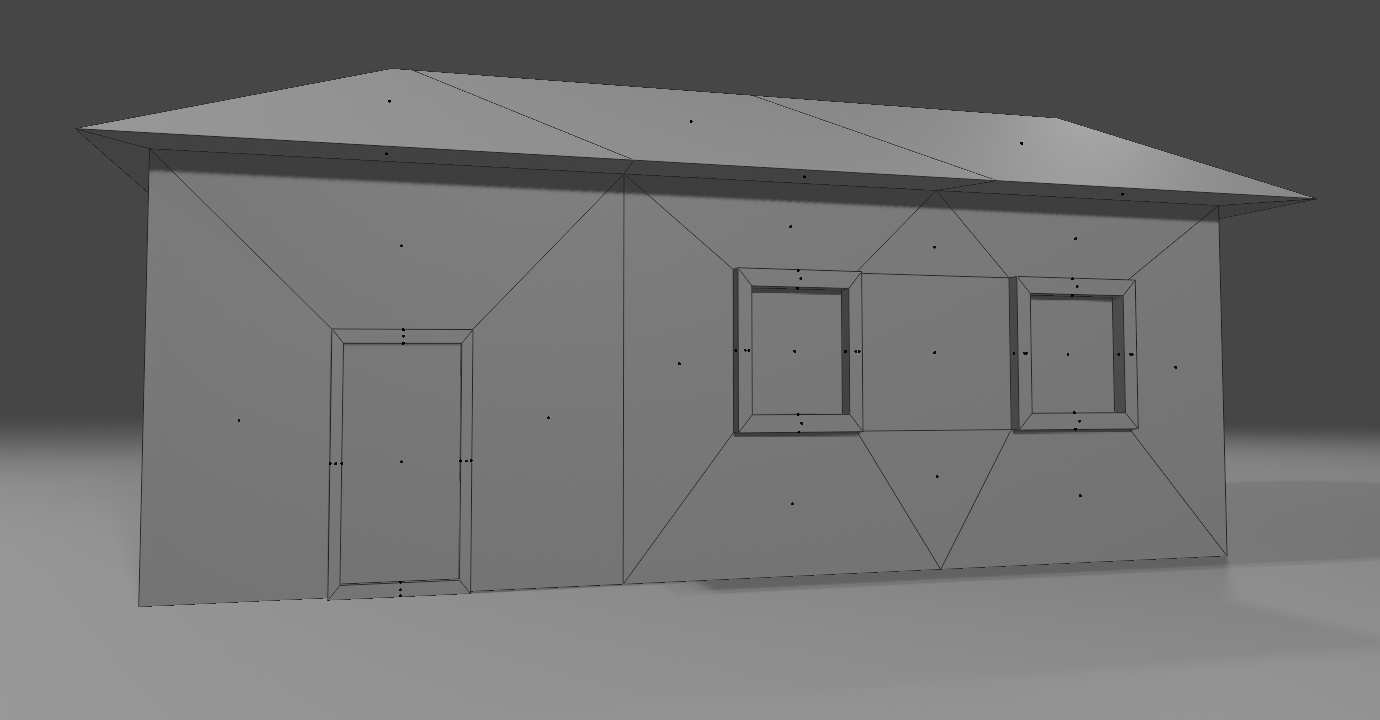 You could get rid of all Tris, but at this point it's a game of "how badly do I want to have all quads, and what kind of edge flow do I want to maintain?" 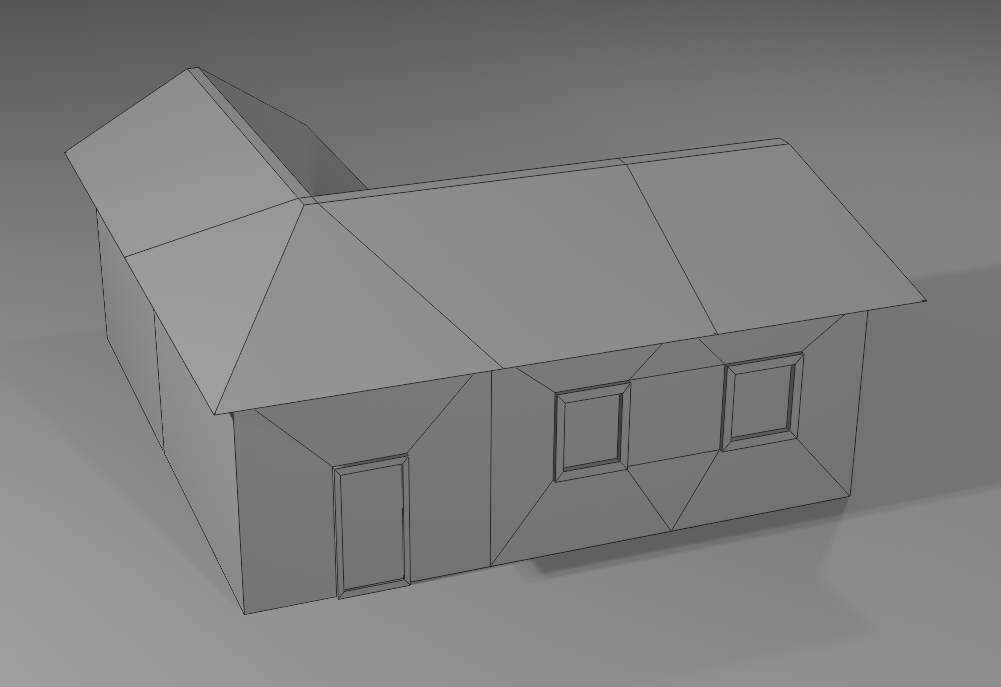 4
Import camera information from Sketchup
2
How to keep shape of geometry when adjusting mesh?
2
Can I divide mesh to perfect squares?
2
How to improve topology around an E-pole?
0
How can I improve the topology of this model?
0
How do I reduce extra unnecessary geometry from an imported model?
0
Imported dae from SketchUp
2
Imported mesh from maya looks off