Offset points in space with python

I have a path-curve that uses a profile with two circles (reference and profile on the image below). I'd like to create a second curve at the same distance as the distance between the profile circles (red arrow between the profile circles) — a black curve in the expected result. If I simply offset each point of a curve by that distance, my curve is 'parallel' to the original (my result), how do I calculate those vectors that are used for offset?

Not perfect (but imperfections are like the one we have bevelling or insetting, etc. too far), and that can also be the case with a curve and bevel object.

Result with imperfection (the active curve with 4 empties as starting points): 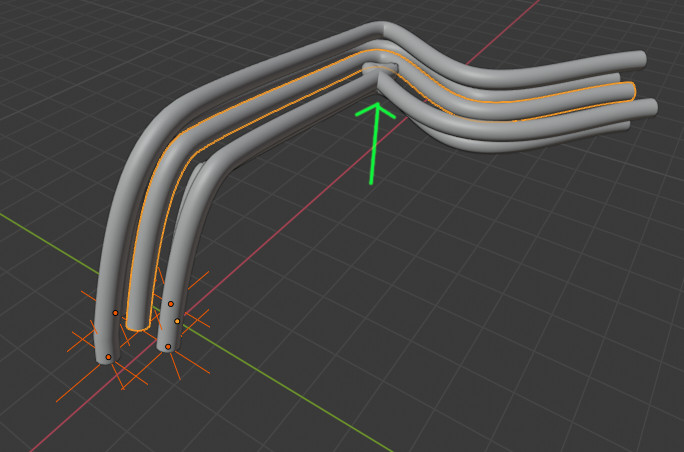 Main part of the code is the following (complete code is in the blend file below, so this snippet won't work alone).

To use it from the blend file: the curve is the active object, starting points are selected object.

Improving it, should need to relax (or remove) vertices comparing the curvatures of the curves... another story...

Not the answer you're looking for? Browse other questions tagged python geometry vector or ask your own question.

2
How to stop Action Constraint giving different results when code is run in text editor vs python console?
5
Does Blender API have any evaluation function for Bezier curves?
4
Cut BMesh with python
3
Why does Quaternion.rotation_difference() always return 12.666471 for x-rotation?
1
Bones with python: emulate armature with constraints
2
Can we smooth selected faces to make curved surface more precise?
0
Python draw 2 vertices under specified angle EDIT!
1
Trying to understand coordinate spaces in python