I am working on an addon which bakes onto multiple meshes. Everything worked fine until I wanted to implement Ambient Occlusion baking.

To do this I need to hide all objects that have nothing to do with the bake from rendering.

Here is a pseudo code of what I am doing in the execute function:

Since I have introduced those hide_render and hide_viewport parts, Blender randomly crashes. But even after hours of debugging I just can't find the issue.

As suggested by Robert Gützkow, I've now tried to build Blender from source to get a stack trace when it crashes: 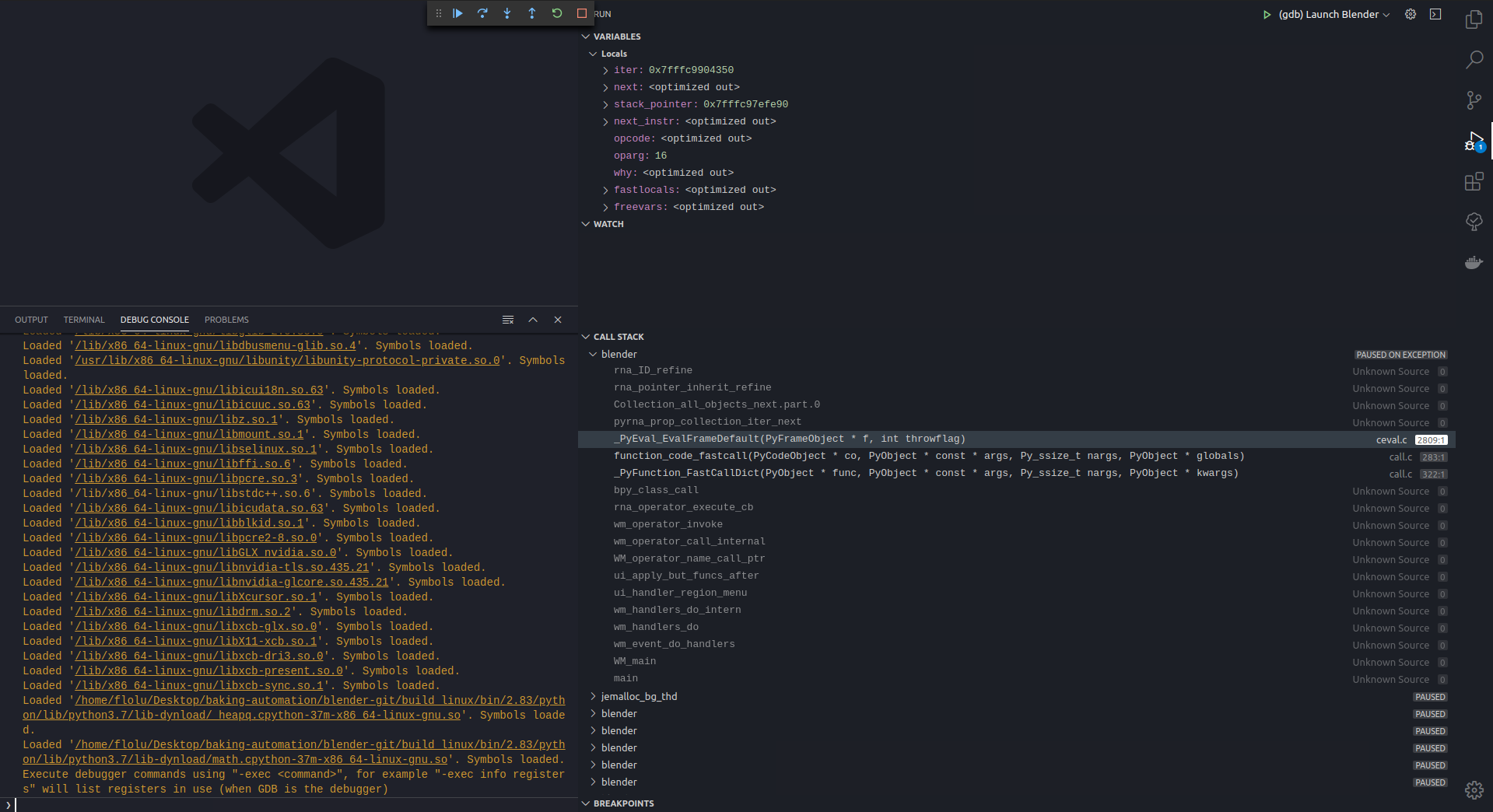 Maybe this helps to find out what the actual problem is?

Here is an example file, which reliably crashes when you click the "Bake" button:

Changing the visibility of an object (hide_render, hide_select, hide_viewport, etc.) triggers the rebuild of collection caches. Since this modifies the collection you're iterating over (Collection.all_objects), it may result in a crash. Since Blender is implemented in C and C++ you're causing undefined behavior through the Python API. Therefore it's just a (un-)lucky coincidence that it didn't crash on Windows.

This limitation is documented in Blender's Python API manual on the very important Gotcha page in the section Unforunate Corner Cases.

Besides all expected cases listed above, there are a few others that should not be an issue but, due to internal implementation details, currently are:

The best solution is to create a list of all objects' names from the object references that are given by Collection.all_objects and then use these unique names to access the actual objects in the loop. This is the generally recommended approach that avoids many of the potential problems described in "Help! My script is crashing".

TL;DR: Do not keep direct references to Blender data (of any kind) when modifying the container of that data, and/or when some undo/redo may happen (e.g. during modal operators execution…). Instead, use indices (or other data always stored by value in Python, like string keys…), that allow you to get access to the desired data.

While you can create copies of the object references, there is no guarantee that these references remain valid. This could only be done when knowing exactly how Blender manages the underlying data structures. Since the internal implementation may change and doesn't have to be consistent across all versions of Blender, that approach would be considered a bad practice.

The following code shows the required modifications to avoid the crash.

In general you would have to perform a lookup of the objects by name instead of using it directly from the collection. If you join, rename or delete objects in the loop you may also want to check that the object still exists before accessing it.

This issue was previously reported on the bug tracker in T62406.

Not the answer you're looking for? Browse other questions tagged python cycles-render-engine scripting texture-baking baking or ask your own question.

3
Audio bake to f-curves fails with very high numbers
0
Can't bake normal map
0
How to Bake a Displacement / Height Map from a High Poly to a Low Poly Mesh?
2
Mantaflow bake fluid from command line, “NameError” : not defined
2
Baking a normal map on to two (seemingly) identical cubes is producing different results
1
How to Generate Background Color of Baked Texture from Island Margins?
0
How can you transfer details from high poly to low poly?