How to resize Render window?

I don't want or need Blender to open a rendered image in a fullscreen window, and I cannot find a setting that allows me to change that.

Anyone have any help on this? I just want it like a 1/4 of the size of the render.

You can achieve this by first disabling the temporary render window, then in your preferred workspace add in an image editor which is displaying the Render Result. 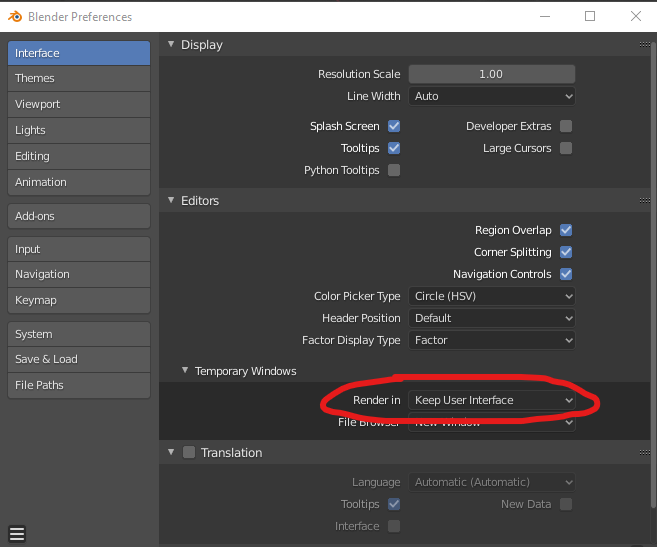 I'm pretty sure you can't do that unless you use a complex python script. Blender is defaulted to make the render interface roughly the size of the render quality.

However, you can adjust the way the render is displayed by going to the render settings, and switching the rendered image display from "New Window" or "Full Screen" to either "Image Editor" or "Keep UI".

Image Editor will display the render being rendered in the image editor of the blender interface, instead of opening a new window for render.

Keep UI will render the image in the background, and not show anything.

Don't worry! You can retrieve the rendered image from the background render by going to image editor. It should show you the render.

If it does not, then switch the image editor image from "tex" or any other image it has to "Render Result".

Save the image by going to Image > Save Image, then select where you want to save it in the browser that shows up.

Not the answer you're looking for? Browse other questions tagged interface customization or ask your own question.

4
How can I adjust background color of blendfile previews?
1
Why can't I resize the Toolshelf?
25
How does Blender decide in which window it shows the render
1
How do I close the User Preferences window when it is not opened by the window manager?
4
How to set Output path correctly for a Single Image render?
2
Is the top row (menu, etc) customisable or is it fixed?
0
How do I change material render preview?