How to have different object info for post-separated objects?

The goal is to create an array of planes that display a rotated texture which depends on the object index of each individual plane multiplied by 90 degrees.

First method (answer to the question)

The object index references the object pass which can be used either in the shader editor to pass information to your material relative to each or different groups of objects, or in the compositor with light passes.

But its purpose is not to get automatically incremented each time you create an object. Thus, you can either manually change their number or use a very simple script to do it automatically.

Open a new workspace of type "Text editor", create a new script with Text > New. Write this (important : You must respect the 4 spaces offset or add a tabulation on the third line else the python interpreter will complain) :

Then, select all of your plane objects in object mode, and click "Run Script" in the top right corner of your text editor. Voilà ! This method seems to remember the order in which each item of an array has been created so your node network should work.

Important : The mapping node works with radians, so you either have to add a math node set to "To radians" (V2.81+) or type "pi/2" (without the quotation marks and in lower caps) in place of "90"

If what you are trying to achieve is simply to have a plane with regularly places 90° rotated squares, you can achieve that with a single object and a bit of node magic.

Voilà ! Scale your plane way up in edit mode. You now have a repeating pattern along X and Y, which rotates with every new square. Example with a "Gradient Texture" set to 'Linear' : 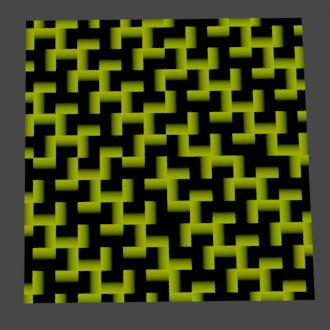 No reference to an infamous 4-armed shape intended

Let's go deeper. Let's capitalize on the node flexibility to add a value node which will make the square pattern tweakable.

Not the answer you're looking for? Browse other questions tagged texturing node-editor objects or ask your own question.

7
Is it possible to give a texture thickness?
1
cutting a mesh object into equal segments for individual export to .dae
1
Object Info returns 0. Random materials for different objects
4
Make a grid of planes fill camera view
0
Multiple objects in array
1
How do I form planes into existing object?
1
Creating Millions Of Particles With Spheres
1
How to properly apply PBR displacement on non rectangular Planes?
3
Material that receives shadows but no shading