Deselect first and last vertices of a path with Python

I have a path of verts and I want to deselect the left one and the right one: with indexes 0 and 2:

The problem is that I can't seem to figure out how to find correct indexes. Iterating through ob.data and bmesh.verts gives me a sorted lists, using a ops.mesh.select_less() deselects everything (in this example), I've tried different options of Sort Mesh Elements without any luck, so I'm out of ideas to make this happen without using something like geodesics on surface.

In the example above the verts I'm looking are placed as far from each other as possible but this is not might not be the case, for instance: 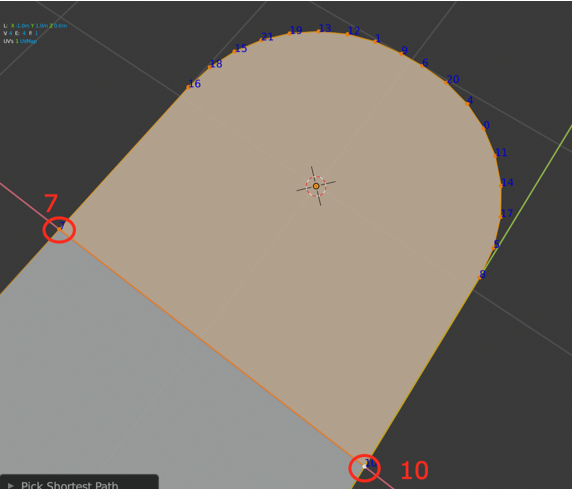 Going by images in question you have a closed loop, if the two verts are ends of selected edge path, see below.

Test Script orders a list of selected verts, orders them by "edge angle" if they have two selected linked edges else assigns -1. The last two vertices are deselected.

Note this is only a proof of context. Getting the angle of three verts a, b, c, edges ab, bc, could also be done via checking dot product of normalized edge vectors.

For the case here, where the verts in question are at either end of an edge path, it would be a matter of looking for selected verts that have only one selected edge in their link edges

Not the answer you're looking for? Browse other questions tagged python vertices or ask your own question.

4
Order of vertices added using Python script and bmesh
2
Blender Python mesh.from_pydata?
1
Is it possible to deselect vertices in Python?
2
Make object follow path and collide with other object
4
Python API script, why does extruding verts behave in this way?
1
How does Blender know which faces and edges to automatically select when doing a multi-vert selection?