Using a bézier curve to raise/lower height of vertices? 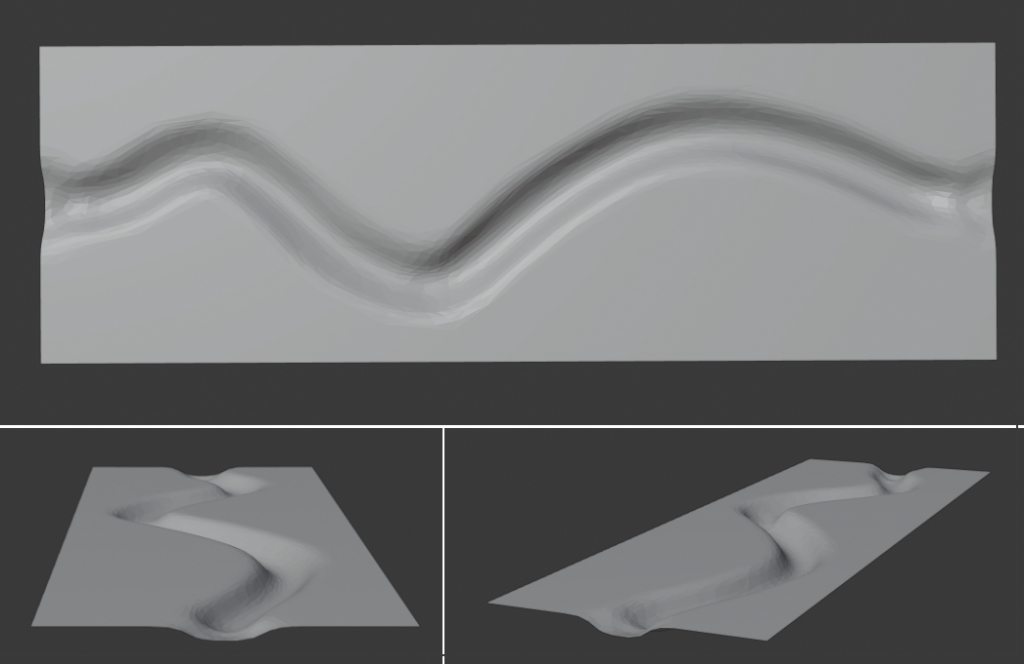 For my case, I would need the deformation to be somewhat smooth (i.e. the change in height is greatest at points closest to the curve, and then dampening off as they are further away, until they are far enough that they are not changed at all).

Is there any way to achieve this?

I have tried going a different route, using the curve + array modifier but I end up with undesired results like this.

I am comfortable with trying to write a custom script if needed; but was wondering if there is already a built-in method or known plugin that does this?

You can, but you will have to use a workaround.

The principle is using a Vertex Weight Proximity modifier to influence displacement strength.

Issue is unfortunately you can't really use a bezier curve object directly, so you will have to use a mesh object with an Array modifier plus a Curve modifier to affect the displacement.

Just array to any mesh (possibly a simple cylinder) and add an Array modifier set to Fit Curve. Then add a Curve modifier on top of it, point it to the same bezier curve as described here.

On your (soon to be) deformed mesh create a vertex group and add all vertex to it. Then add a Vertex Weight Proximity modifier set to control that same vertex group in Distance to Geometry > Face mode.

Now add a displace modifier influenced by the above vertex group as described here, adjust values and distances as necessary.

Not the answer you're looking for? Browse other questions tagged mesh bezier or ask your own question.

20
How to model braided nylon sleeve
22
Worms crawling under skin
1
Array + Curve modifiers - dealing with overlapped faces effectively
1
How to achieve a 3D warp field effect in blender (2.81)
1
Emit particles from faces with a specified normal
0
Raked sand/gravel
2
When using warp modifier, is there a way to keep the warping speed constant?
0
How do you make a plane bend depending on nearby objects