It's doesn't seem to matter if I use the curves "extra objects" to make the spiral or just create it on my own. I can't seem to find a way to keep tilt parallel to any one axis. Or make tilt uniform in any meaningful way without tilting each handle individually, which is a waste of time.

I'm using this spiral as a curve modifier. I have an object following this spiral curve path. I want to have some control over its orientation and deformation, which is why I'm not using the "follow path" constraint. I'd like to set the handle tilt uniform to a certain axis so the object stays level as it travels up the spiral.

The final result will be a flow demonstration with arrows, very similar to this example I made in another project, but with a long spiral as shown above. I need to be able to control how the arrows rotate as they travel along the path.

Is there any way to keep tilt aligned to a specific axis so I can predict object rotation?

I've already tried:
• Setting the "mean tilt" number with all points selected
• Clearing tilt (my example image is what happens when you clear the tilt)
• Convert from curve > mesh > back to curve
• Tilt interpolation options
• Proportional editing while in tilt edit mode
• I need object deformation, so I will not be using path constraints

I solved it! In the Curve Properties menu, Twisting should be set to Z-up.

This makes all handle tilts level to one axis, and from there, I can tilt them all together or one at a time to get my desired result.

And the final result, with no errant twisting or rotating:

I think the closest thing you can do is 'Clear tilt'.

While in edit mode of the curve, select all curve points and press Alt+T or choose the tool from the menu shown below: 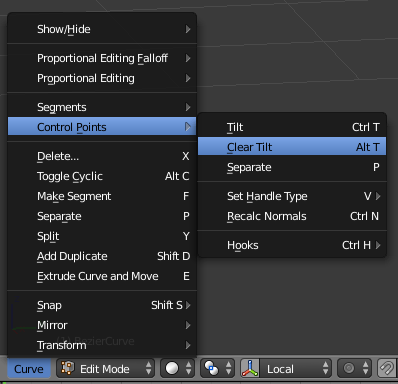 However, on a spiral this does seem to still allow for some curvature to remain. But, on a spiral where all 'levels' of the spiral are the same you should be able to then tilt all the incorrect curve points at once with Ctrl+T to correct them all at the same time.

5
Smoothing curve “tilt”
7
Scale a 3D beveled bezier path vertex on 1 axis, not 3
5
How to get curve to twist with the hooked object?
2
Duplicate object and scale across bezier curve
0
How to combine two curves for a camera animation
1
Keeping array objects straight when duplicated along a 3D twisted curve in Blender 2.8