I have a plane for which I've enabled the cloth modifier. I have pinned the four corners of the plane to empty objects. I've animated the empty objects to move the plane down and collide with a sphere. (This is all made clear by the video)

I want to unpin the plane once it has collided with the sphere, so I added a vertex weight edit modifier to the plane. This allows me to remove the pinned vertex group when the plane collides.

Everything works as expected except that when the pinned vertex group is removed, the plane remains deformed as if it were still being tugged. In other words, when the plane is unpinned, it doesn't return to its original shape like a real elastic piece of cloth. Is there any way to achieve this? I've attached the blender file below and am using the latest version of blender (2.8).

Disabling Group on the way (of running simulation) is like to change the rules of game in a middle of match (shocked audience). 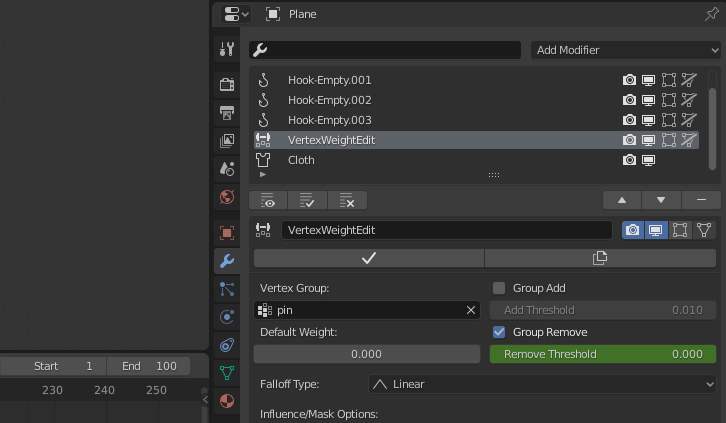 Not the answer you're looking for? Browse other questions tagged modeling animation modifiers physics cloth-simulation or ask your own question.

7
How Does Cloth Friction Work?
2
How to get Cloth to ignore collisions with specific vertex groups?
1
How to get cloth + wind simulation in 2.80?
1
How to create a floating flag that isnt pinned/hooked?
1
Trampoline like effect using cloth modifier?
0
Cloth doesn't move during simulation
1
Attaching another object to cloth simulation
3
Cloth sim sag between pins