Modify the visibility of collections locally to the viewport with python

We have a project with 2 viewports in the same interface. We need an operator that can click on one of the viewports and change the visibility of some collections locally in the viewport that has been clicked.

We have find the following code for set the view of the viewport in local mode:

And the only method we have found to change the visibility of a collection:

That inverts the visibility of the current collection.

The problem is, that this method changes visibility globally and we want to change it locally.

We know that the execution context is important, but since we are executing it from an operator in the tools window of the viewport, we believe that we are doing that correctly.

Other variables as disabled in viewport, have a direct access to the variable via python, example:

But the variable that we need in local does not have it.

Manually, in the interface, it is simple to do, as seen in the image 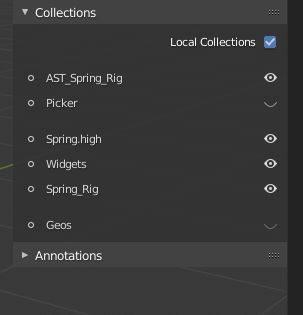 The final question is: "Is there any way to edit via python, the visibility of the collections locally to the viewport?"

We have been reviewing it and we have realized that the problem was in the context overwrite. Although we have already done this, we did it by selecting the wrong area

The function get_area (…) returned the area of ​​the viewport in which to make the changes, but did not select the correct viewport, since having two in the interface always takes the first one located in the vector, which was a viewport with local visibility of collections deactivated.

Not the answer you're looking for? Browse other questions tagged python collections visibility or ask your own question.

0
How to make the panel detect that the operator has been executed correctly?
1
How to keyframe all the objects viewport/render visibility inside the selected collection via python code?
0
Python : hide collection (turn off the eyeball icon of collection) in outliner
1
Python path for allowing animation of viewport and render visibility of objects
1
Get and Set Hide in viewport and Disable in viewport via Python API