The idea is to change two letters into a circular object using animations. Essentially, the two converge into one line where the half circles, made by the letters, align to make a circle cut in half by the line. The entire sequence then spins as the line disappears into the middle, leaving just a circle.

I have attempted to search the communities for video tutorials or someone that may have done something similar or any text-to-object animations. Maybe even combining several ideas if need be, but have come short and am stuck on how to even approach the project.

If anyone has any links or experience in doing such an animation, any help would be greatly appreciated.

Any way to remove the extra space? These are supposed to be half circles so I would expect them to fit together without this happening. Not sure of how to prevent this. 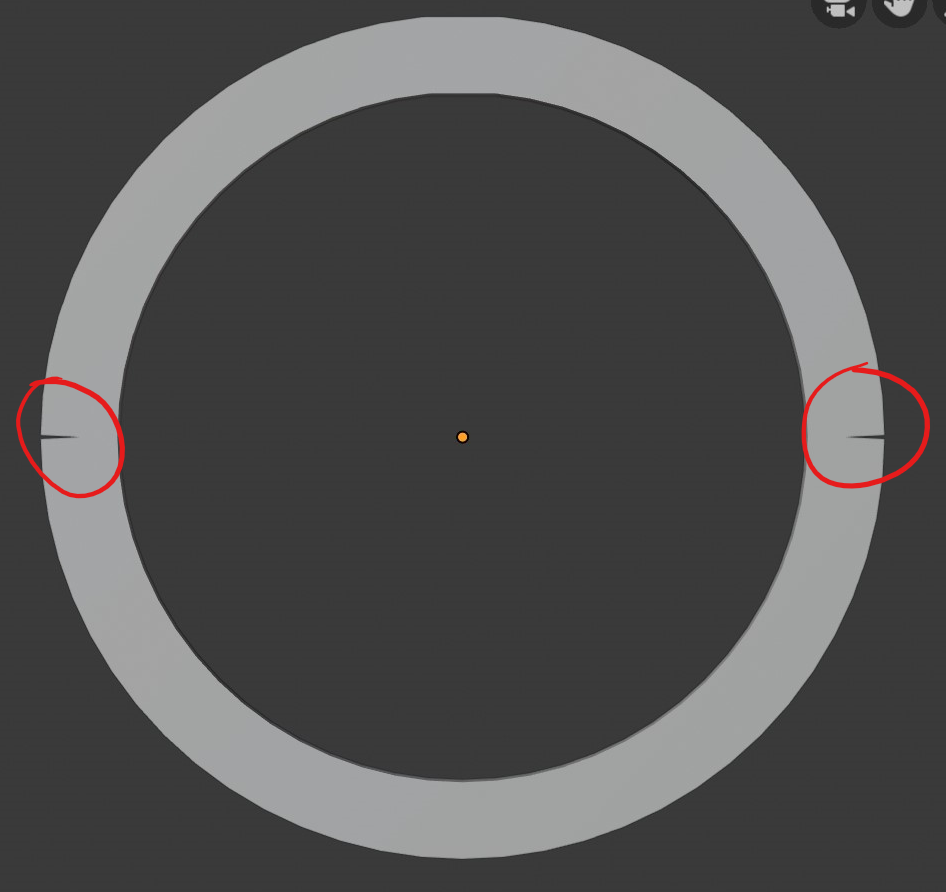 We will use shape keys, vertex groups, keyframes, and modifiers to achieve this.

First, go to edit > Preferences > Animation and make sure the default interpolation of F-Curves is set to Linear 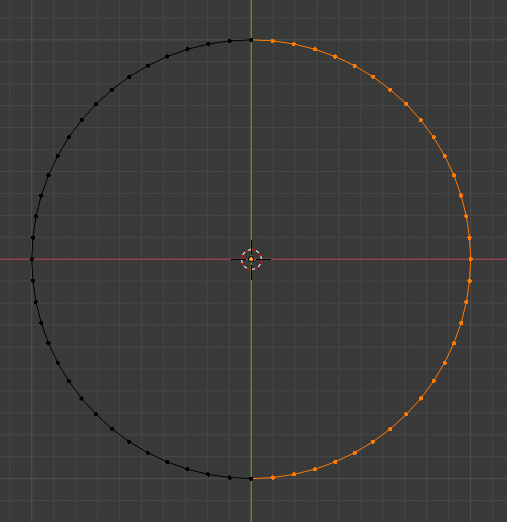 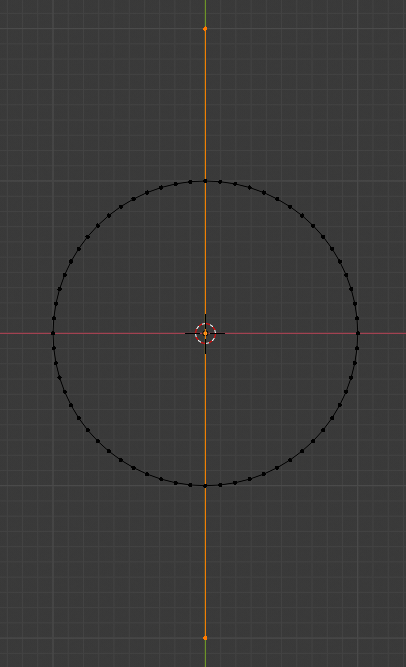 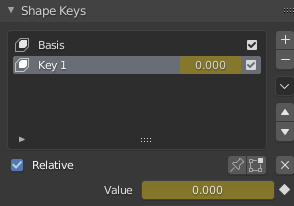 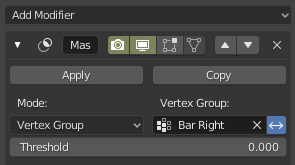 This really only applies to the example given, but I found a way to animate the text as shown in the example. I couldn't find any fonts that would work, so I designed my own. Here's a rendered video.

This is what to what to do: Add a circle make sure the fill type is set to triangle fan:

Go into edit mode and separate half of the faces into a new object by pressing 'P'. We will use the other half as a boolean later:

Go back to object mode and apply scale to the left half by going to options>apply>scale. Then go back to edit mode and extrude it .05 along the Z axis:

Now I selected the other half and did the same. (This can be whatever height as long as it is longer than the first half of the circle:

Then scale that down slightly, move it down the Z axis slightly, rotate it 180 degrees on the Z axis, and transform the origins of both objects to the center of mass (surface). I then aligned both objects along all axes. I also went to edit mode and extruded the face on the boolean half which was on the right side so that it would cut a "C" shape out of the left half: 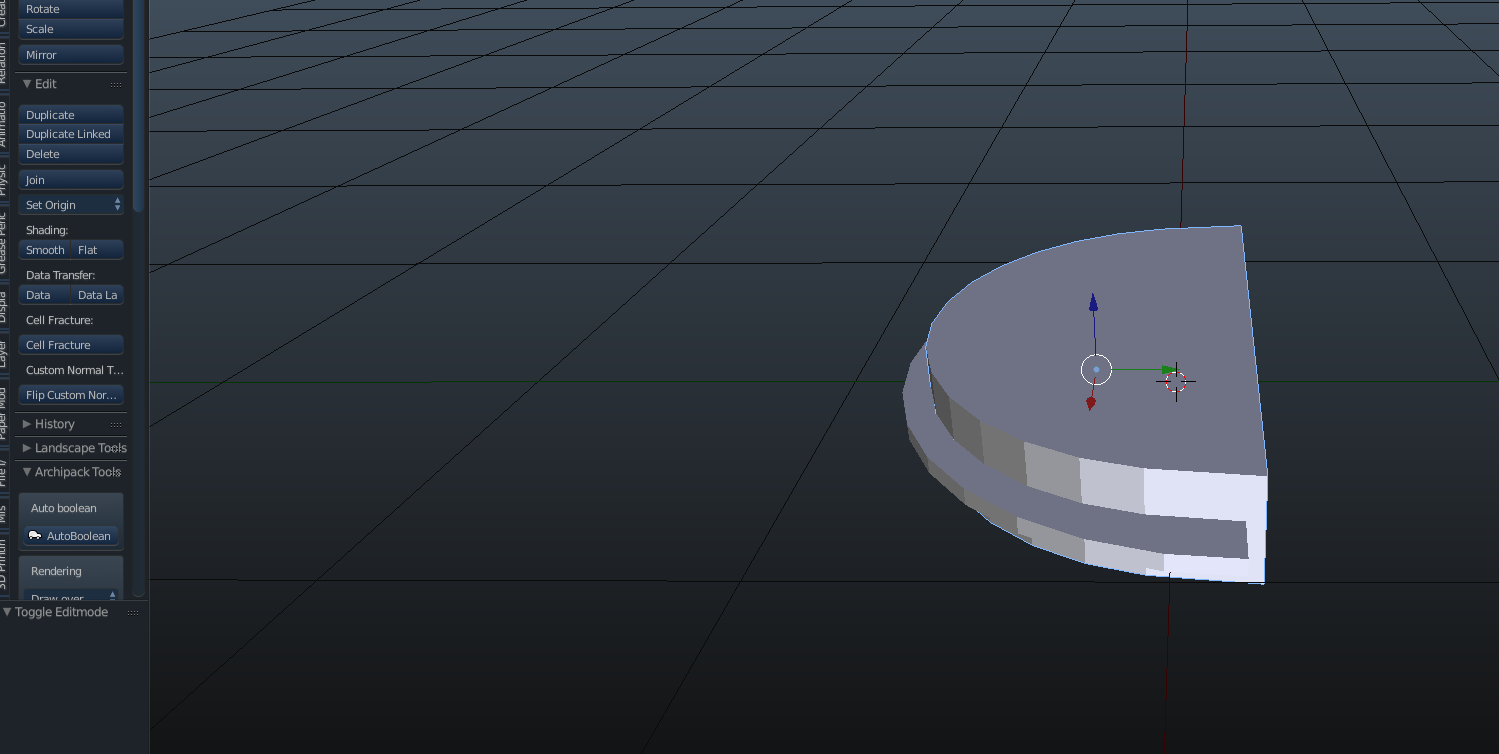 Now go into edit mode with the C shape selected, and select the bottom face of the C:

Extrude the face .05 along the Y axis, and select the new face on the right of it:

SHFT-D to duplicate the face, right-click to set it's position to default, and CTRL+H to hook it to an empty:

Now extrude the new face along the X axis until it is about long enough to make the object look like a "D". Then CTRL+H hook that face to a new empty:

Now you are able to animate this line in object mode. Go to object mode, select the object and both empties, and duplicate them. Now rotate them 180 degrees along the Z axis to make a P. You can also adjust the location if you want: 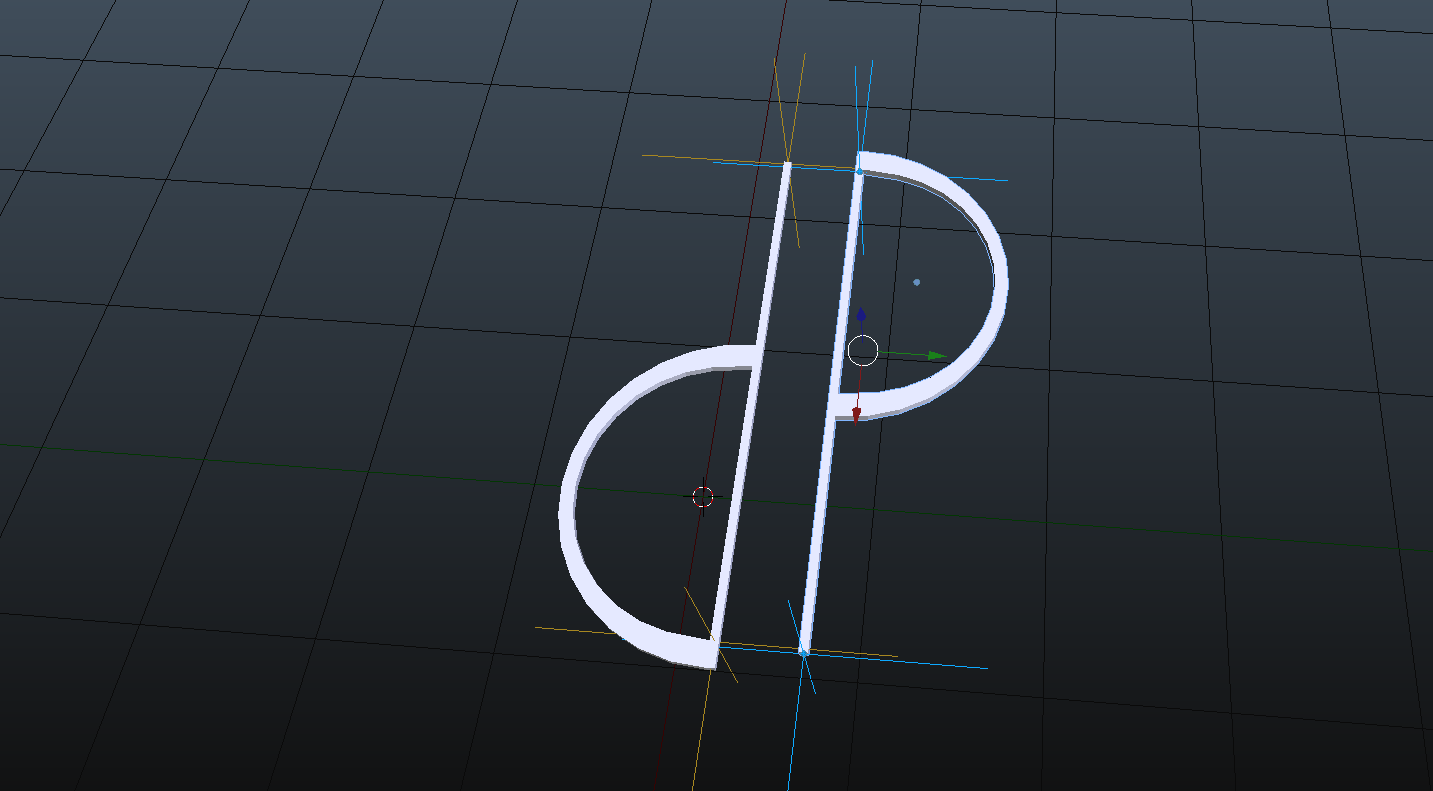 Now you can animate the object (make sure you select the hooks too for each object when you animate). This can be eyeballed, it does not have to be perfect. Set the location for your symbols to start at frame 1 by selecting them, then pressing I>Location. Move to about frame 15, and move the objects to where you want them to be making one circle, then press I>location again. Before:

Now between frames 15 and 50 you will want to animate the circle and line spinning while the hooks spin, and converge at the middle getting brighter at the center. 1)Add an empty and parent all objects and hooks to it. This is for rotation so that the rotating for each object doesn't go wacky. BTW when I say all objects I do not meant the camera or any lighting in the scene. I mean just the text animating objects and the hooks. Select the empty, and add a rotation frame by pressing I>rotation for it at frame 1. Do not move it, and set another frame at frame 15. Now go to about frame 50, and rotate it 400 degrees around the Z axis. Then set another rotation frame. The rotation is set up. Now the hooks. Select all of the objects, and SHFT+S the cursor to the selected. It will now be in the center of the scene. Select empties 1 2 3 and 4, and insert a location keyframe at frame 15. Then skip to frame 50, and SHFT+S snap them to the cursor. Now set another keyframe. Frame 15: 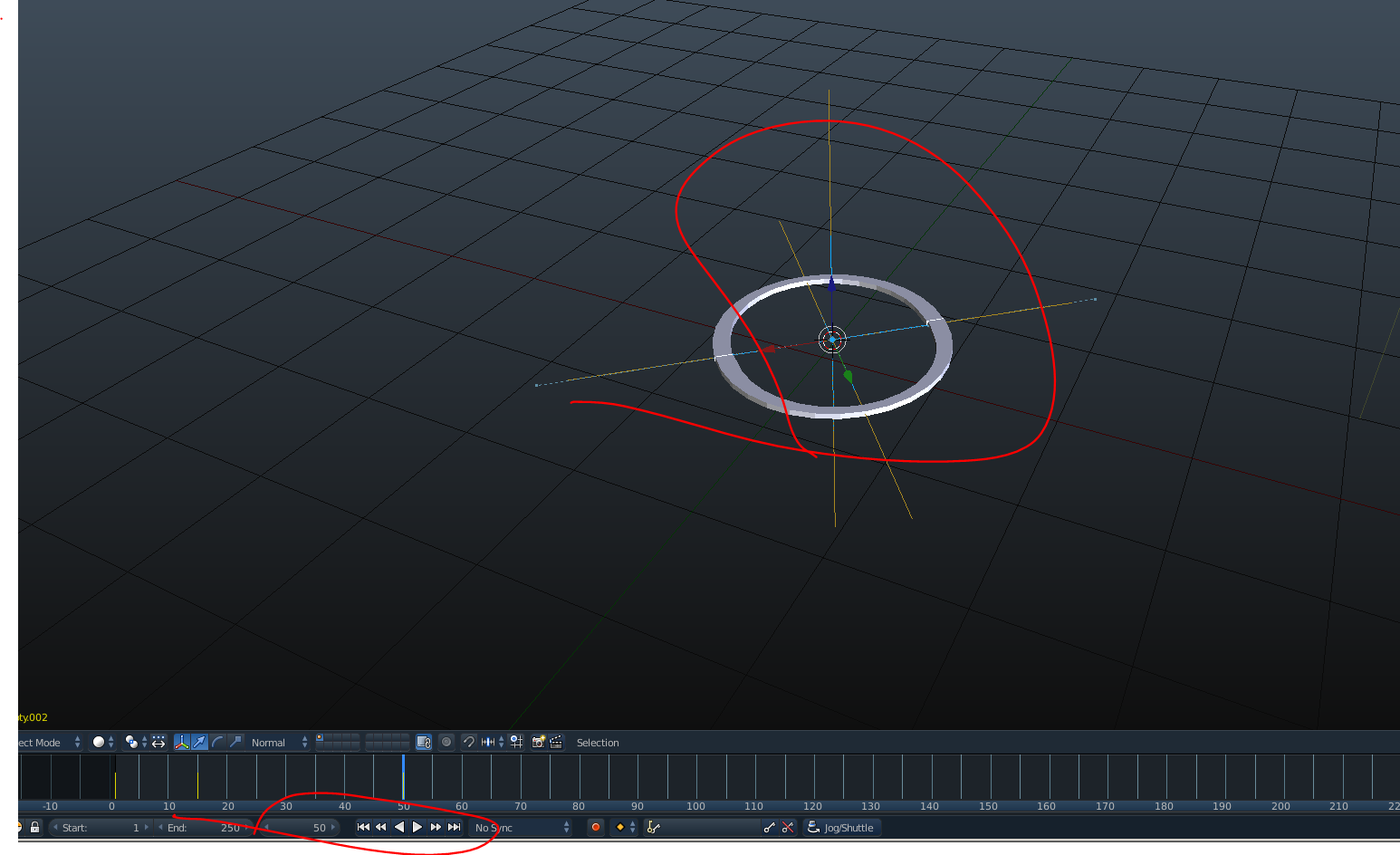 Now select one half at frame 15 and go to edit mode. This is for setting up the shaders. Select only the line's faces, and create a new emission material for it. Then assign the material. I have animated the material to be dark at frame 15, and brightness 2 at frame 50. Make sure that the renderer is cycles. Here are my settings for the material:

The rest is done by basically adding a small cylinder, scaling it until it is about the size of the lines before they disappear in the middle, and adding a boolean so that it has a hole in the middle. Then duplicating it to form rings around the center, and then moving the rings out of the camera view. Then animating the rings so that the bigger ones appear each next frame. Now you are just about done!

Here's the .blend to play around with if you like:

I am with @Pythogen on this. You can easily get something better looking if it's not done in 3D

but if it must be in 3D, look up Metaballs in blender

here is a nice introduction to it here

other than that, how I personly would go about it

3
How to organise dope sheet keyframes with color or strips/groups and how to change the order of displaying animations?
2
How can I build a versatile camera rig which can both orbit around its focus and pan?
4
Animation nodes - sorted group transformation
0
NLA editor, I can't get two baked animations to work at the same time
1
Keyframing driver location results in unwanted movement of armature and animation
0
opening unity model with animation into blender