I'm trying to do some scenes which use a mixture of 3D backgrounds with 2D animated characters.The best way I've figured this out so far is to use a plane with an image sequence of pngs which hold the frames.

The problem with this method is Blender seams to only load image sequences based on image numbering. If I wanted to do a sequence which loops say, frames 0-5, then repeats 4-0 for the 'return' of the animation, I would have to load frames doubled up.

Is there a way, maybe with a script, to change the sequence order? I can see it as a useful plugin but my python skills are pretty much non existent.

It is quite easy to do what you want, just learn how to use the Frames, Start Frame**, Offset and Cyclic controls on the Image Sequence node used as the texture of the plane's material. 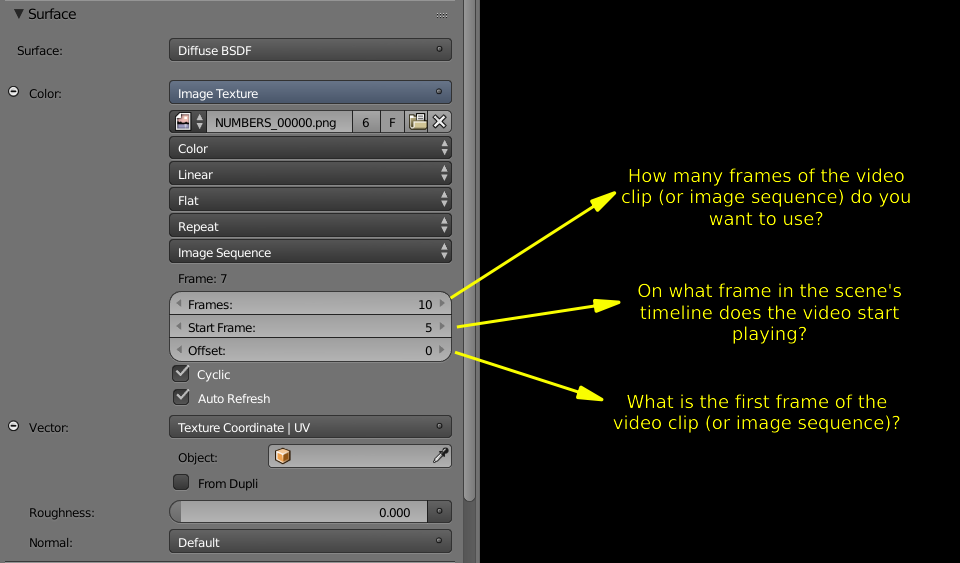 Read: Same Video on each face, but with different time delay?

Read: How do you animate image texture materials in blender cycles with keyframes?

0
How can I control playback of video textures?
0
Image Sequence -> Timeline relation. How could I make an image sequence start at frame 20?
11
How do you animate image texture materials in blender cycles with keyframes?
2
Same Video on each face, but with different time delay?
0
Play multiple videos in EEVEE starting at different time

6
preview image sequence composite
4
VSE: How to Speed up the Preview of Image Strips?
1
How to handle image creation, search and deletion properly?
1
Chroma key and a few images for background
0
Random Image Sequence Start Frame
0
How to composite an image sequence rendered in PNG?