To make several vertices co-planar, the usual way is to use Scale = 0 along some convenient axis, but sometimes there is no convenient axis, e.g in this case were I placed the vertices using polar coordinates: 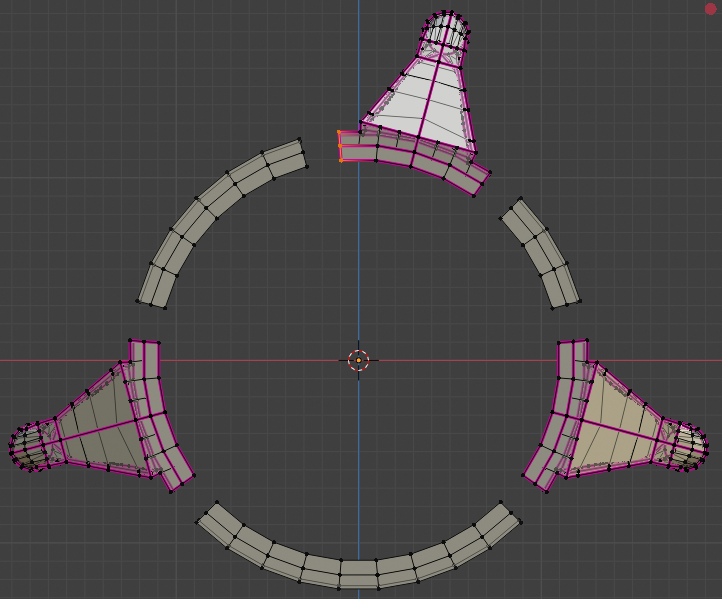 How to make the selected vertices co-planar again after they have been a bit disturbed. The target plane contains the global Y axis and the average angular position of the selected set.

I understand I could rotate the vertices around Y, so that they are roughly aligned with Z, then use Scale X = 0. That's what I do, but I'm looking now for a more accurate and less fastidious method.

In a more general way, is there a method (I assume this would be a addon) to facilitate work when dealing with object constructed by angle-distance rather than distance-distance. For example a method which would allow to move the selected vertices radially by the same specific distance (e.g. move each vertex away by 2 cm from the center of the object) while keeping their angular position unchanged?

This looks like a job for Custom Orientations. ('+' in the Orientation dropdown, after making a defining selection)

If you do this a lot, it's probably worth creating a keyboard shortcut for the addition of a Custom Orientation, and maybe setting that operator to 'Overwrite Previous', and/or 'Use after Creation'.

5
Distorted Cylinder to Regular Cylinder
1
Boolean glitch on object - Creates duplicate rather than subtracts
0
Applying transforms automatically before I export an FBX?
1
How to inset faces down to edges rather than faces
1
The Boolean modifier is additive rather than removing mesh
2
How can I parent objects so that only position and not scale is applied to the children when scaling the parent?
1
Why is alt V dragging from the bottom rather than the top