How can I get a Node input/output (e.g. a single Color/Value) that I can control from the one spot, but have mapped across multiple materials? For example, to control a value (say, Glass Shader IOF, or a Mix Shader Fac) across 30 different materials (that may or may not have different node setups, but all use the input I want as a driving factor somewhere inside).

I've got a few ideas so far, but am not sure which will work and/or which will be the best way to go about it:

Background: I'm working on a model that has a non-trivial number of materials (just over 100, auto-generated from a 3D scanner), and am trying to set up effective backface culling in rendering by using the method described here. This involves scripting the addition and connecting of all the extra nodes (Mix shader controlled by Geometry Backfacing, and a Transparent BSDF node to make the faces be rendered transparent from the back), because doing it manually for all 100+ materials would be a pain. It's not essential, but I was thinking it would be nice to be able to control the overall effect by automating all the Transparent BSDF Alpha amounts - I'm just not sure how I'd go about controlling that from a single point though.

This can be done with node groups. 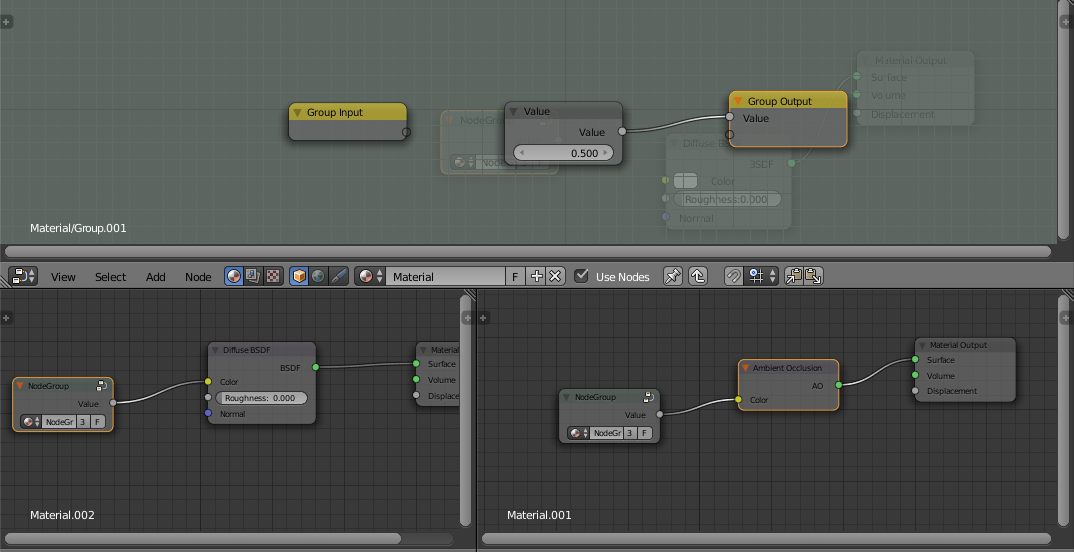 Just add a value node (or any input nodes you want, e.g. RGB for color) and press ⎈ CtrlG to make it into a group.

Changes the values of the nodes inside the group will take effect everywhere the group is used, even across different materials. So in this case changing the value node will change the brightness of the diffuse material and the AO material.

Just a reminder : the "rendered preview" mode from "3d view" do not update animated node values from node group (With Blender version 2.79b) but the result is ok during "rendering animation / image".

2
How can I have a "constant variable" for multiple Materials
38
How can I make a material only apply to a side of a plane?
5
Switch node in Cycles material?
4
Global (colour) variables