And halfway through he shows an example of how to drive the y-rotation of an object via a driver with the script: bpy.context.scene.frame_current

His object then rotates according as he scrubs through the timeline. This doesn't work for me.

A simple way around this issue would be to add an input variable with the the scene's current frame, then referencing it in the expression. 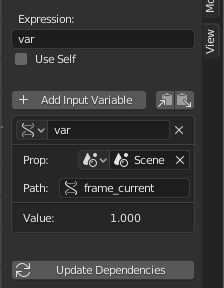 The steps to set this up are as follows:

Input Variables are the proper way to read from RNA properties when using Driver expressions. This way Blender knows to update the dependencies and ensure the driver functions properly.

Not the answer you're looking for? Browse other questions tagged scripting drivers or ask your own question.